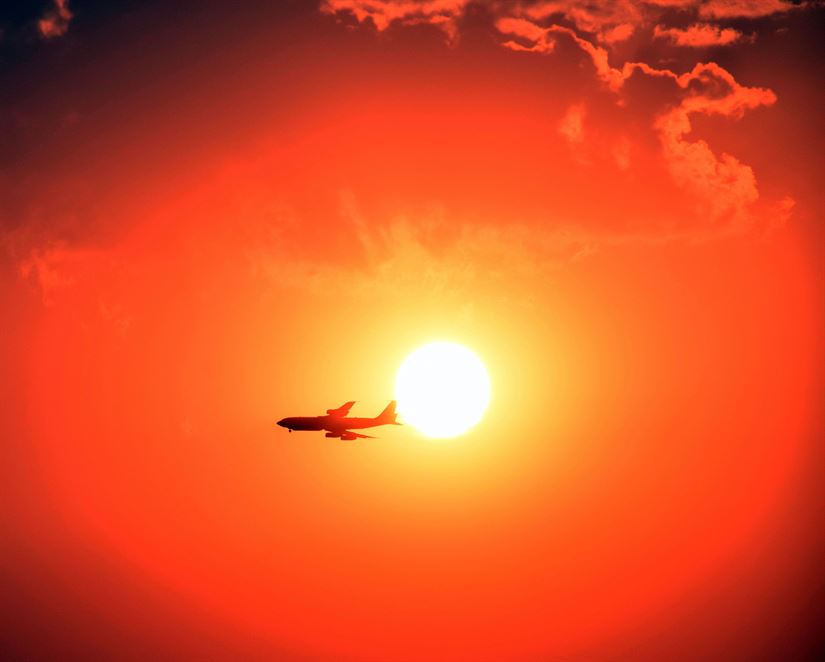 The latest figures for aviation fuel use per year show that the world used 300 megatons of jet fuel annually in 2019, manufacturing them from fossil fuels. But a carbon-constrained future requires us to envision a world that can produce that much aviation fuel for commercial aircraft, but without carbon emissions.

A promising technology (see detailed technology description in lay terms or full papers at end of this article) involves solar thermochemistry:where large solar fields of mirrors are used to concentrate the sun’s rays to very high temperatures in a solar reactor to catalyze the rearrangement of molecules of CO2 and H2O into synthetic hydrocarbons to ultimately manufacture aviation fuel.

Because of the large solar fields required, producing carbon-free aviation fuel – as startups like Synhelion are beginning to do – will require land in sunny desert regions.

How much land would it take to make the world’s jet fuel using solar reforming?

By 2030, Synhelion plans to have roughly 100 small plants in operation producing around 5 megatons of solar fuel a year using a solar version of the traditional reforming process, a well developed research field. The company plans to begin rolling this out commercially in 2022 at an estimated fuel cost between 50 cents and $1 per litre.

According to Synhelion CTO Philipp Furler, if these 100 facilities – to produce 5 megatons of fuel a year from solar reforming – were all in one place in the world; the total land requirement would be about 80 sq kilometers. And to produce the entire global demand of 300 megatons a year at one site with solar reforming would require about 5,000 sq km.

A single solar fuel production site occupying a 5,000 square kilometer region in any good solar region – stretching from Seminole to Lamesa in Texas, for example – could supply the entire world’s aviation fuel demand using solar reforming. Solar reforming of methane cuts carbon emissions by 50% because the heat required for the thermochemistry is produced by solar energy.

But the firm is simultaneously working on 100% carbon neutral aviation fuel by 2030. This more advanced thermochemical process manufactures jet fuel from CO2 and H2O captured directly from air. Because this process requires higher temperatures, it will require much more space for solar harvesting.

“If we were to cover the whole global jet fuel demand with CO2-neutral fuels from pure H2O/CO2 splitting, we would need around 50,000 square kilometres,” Furler calculated.

So what would this look like in some of the world’s most ideal places? If one “solar refinery” manufactured all the aviation fuel needed for the entire world from CO2+H2O captured from air using solar energy – all in just one site, the solar field would stretch for example, from Paraburdoo to Capricorn in the Western Australian desert. 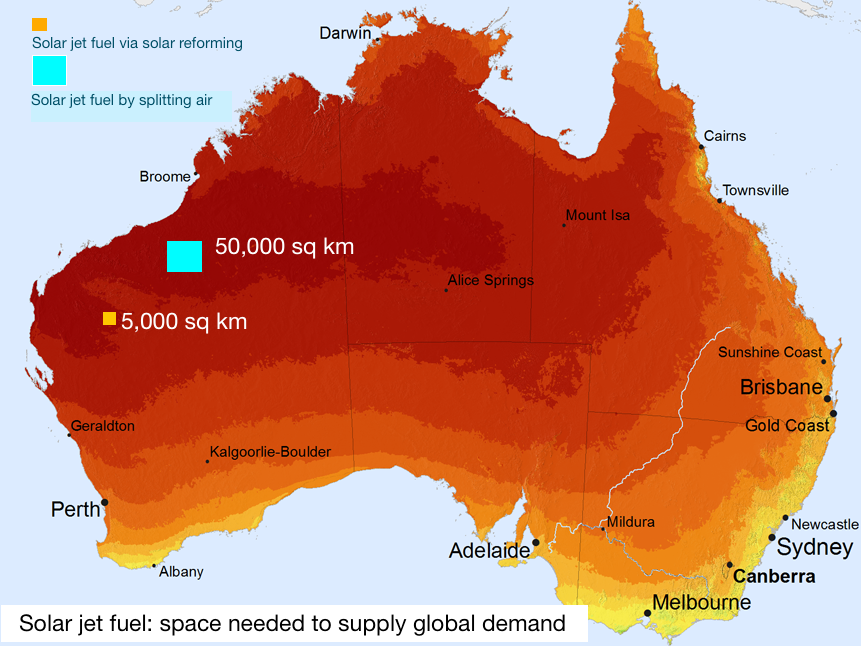 But of course, no one country would produce the entire global demand. Countries that are able to, would choose to produce at least their own domestic requirements, and so many of these solar “refineries” would be built all over the world, as Furler pointed out: “We assume that many smaller plants would be distributed all over the world, in all the sunny areas.”

So the question is; which regions have the attributes needed to most economically manufacture solar jet fuel from air to replace todays global jet fuel consumption of 300 megatons per year, or just their own domestic demand, and how do costs compare regionally?

Which regions are best suited?

A new study from Christoph Falter, who worked closely with Furler at Swiss and German research labs on the solar reactor R&D behind the Synhelion ETH spin-off provides some answers to these questions.

Falter and team at the German research lab Bauhaus Luftfahrt investigate these questions in a new paper – Geographical Potential of Solar Thermochemical Jet Fuel Production. The study reveals which countries could produce their own solar jet fuel, or even the entire global demand, from sunlight and CO2 and H2O in air. It takes into account the solar resource, the coastal access for fuel shipping and if there is enough suitable space not required for other uses like cities, agriculture, industries and forestry.

The study finds that many of the countries analyzed could easily produce just their own domestic demand, guaranteeing their own supply security as well as meeting national greenhouse gas reduction commitments.   Some ten countries could produce the entire global demand.

Of these, some countries could produce even more than 100 percent of global needs: Australia could produce up to 18 times the current global demand. Desert nations like Algeria and Saudi Arabia could produce it four to five times over, and from just its southwest, the USA could produce almost two and a half times current world demand.

“It can all be done in a single country. You can produce a lot of fuel in a relatively small area. It of course means that you have miles and miles of these plants somewhere, but it would be degraded land. You can build in the desert, that’s the best location and you don’t need to be near cities, so you wouldn’t disturb a lot of people,” said Falter.

“But it depends on financial infrastructure too. For example in sunny regions in the USA or Australia, you can produce the fuel more inexpensively because you can borrow more cheaply in those countries.” 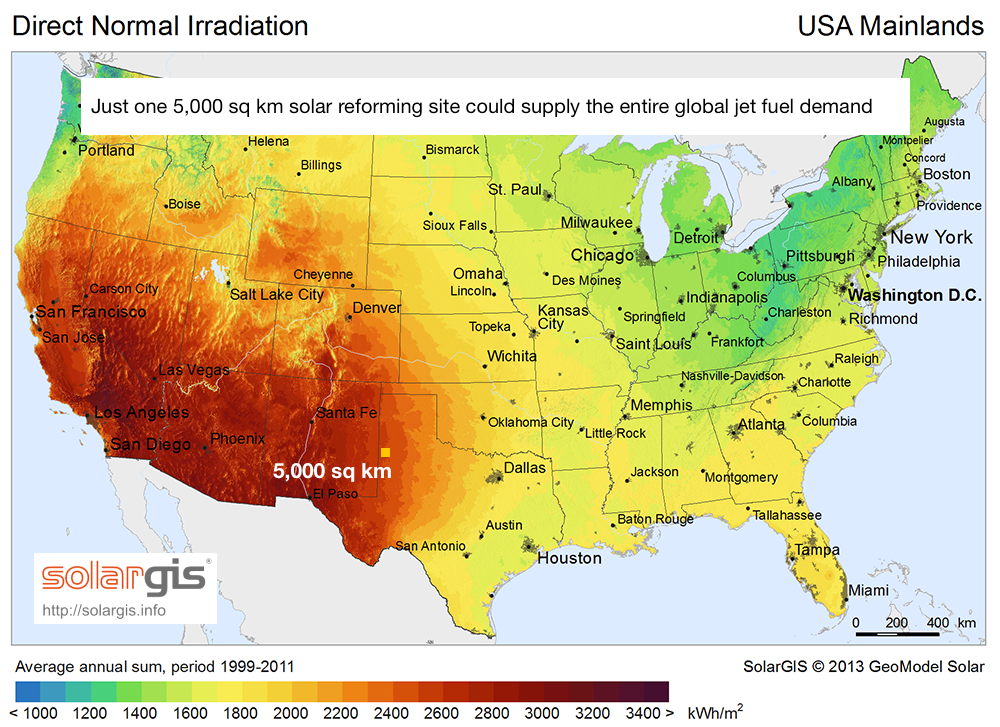 Estimates are based on the date of future solar reactor efficiency

The studies are set at that point in the future once thermochemical conversion efficiency has reached at least 15%, making their production costs competitive. Higher efficiencies further reduce the costs.

“We show the direct effect of efficiency on costs. For example, we find that for the US to produce its own jet fuel demand – which is 770 million tons per yr – once we get to 15 percent efficiency, it would be under 2 euros per litre (€/L),” said Falter. “And to produce the entire world demand in the US, would be around that 2 euros mark.” (One euro is roughly equivalent to 1 USD in 2020.)

Solar thermochemical jet fuel researchers took about 5 years to get from 1% to reach 5% conversion efficiency, so these efficiency milestones could be expected by around 2030, as efficiency records tend to accumulate faster as development increases, depending on the speed and scale of R&D funds. Synhelion expects to begin commercial deliveries by 2030.

Australia, with its small domestic demand for jet fuel but huge empty western coastal desert is one of the areas best suited for supplying the global demand with 100% solar jet fuel.   “But even there, the costs are quite similar: just under 2.1 €/L once we hit 15 percent efficiency, down to a bit over 1.7 €/L once we get to 25 percent efficiency,” Falter noted.

“Increasing the efficiency from 15 to 25 percent, the production costs are reduced by about 20 percent. In the baseline case, the global jet fuel demand could be covered at costs between 1.58 and 1.83 €/L with production locations in South America, the United States, and the Mediterranean region.”

By including factors like loan rates and inflation rates, the paper compares how much it will cost for each nation to produce its domestic jet fuel demand, or the global fuel demand. Regions in the US and Australia, and Mediterranean nations like Spain and Israel have among the worlds best overall conditions for manufacturing solar jet fuel, between ideal solar resources, convenient coasts for fuel shipping and stable lending environments or weighted average cost of capital (WACC).

From the paper: “The baseline case starts with the lowest production costs in Israel and Chile, which both have comparably low nominal WACCs of about 5% and 7% and inflation of close to 0% and 3%, respectively (2013–2017). Despite not having the best solar resource in the MED region, Israel thus achieves very low production costs through its beneficially low costs of capital. Egypt, on the other hand, with the best solar resource in the region, has a much higher nominal WACC of 23.3% and an inflation rate of 12.3%, which results in prohibitively high production costs and therefore does not appear in the cost-supply curves shown above.”

In regions where the costs of capital are higher, a poor financial environment will outweigh solar suitability:

The paper states: “In southern Africa, the solar irradiation is also relatively high, making this region likewise favorable from a technical point of view. The production potential is quite high, exceeding those for the selected countries in South America. However, the cost of capital is comparably high with the lowest nominal WACC found in Botswana at 8.8%, about 13% in South Africa and Namibia, and up to 18.4% in Angola. The resulting production costs start at 2.13 €/L in Botswana, whereas locations in Namibia and South Africa have the lowest costs of 2.51 €/L and 2.53 €/L, respectively. Angola has very high costs of capital, preventing the production of solar jet fuel below 4.8 €/L. In southern Africa, the regional demand could, therefore, be covered at average costs of 2.14 €/L and the global demand at 2.32 €/L using the best locations found in Botswana.”

While any of these financial conditions could change in the future, what it does establish is that the cost-supply curves for the manufacture of solar jet fuel from just sunlight and CO2 and H2O in air are relatively flat.

This indicates that unlike for other renewable fuel production pathways, such as biofuels – which are limited by 10 times the land requirement (see Water Footprint and Land Requirement of Solar Thermochemical Jet- Fuel Production) – the solar thermochemical pathway can produce practically unlimited amounts of aviation fuel at relatively constant costs.
_______________________