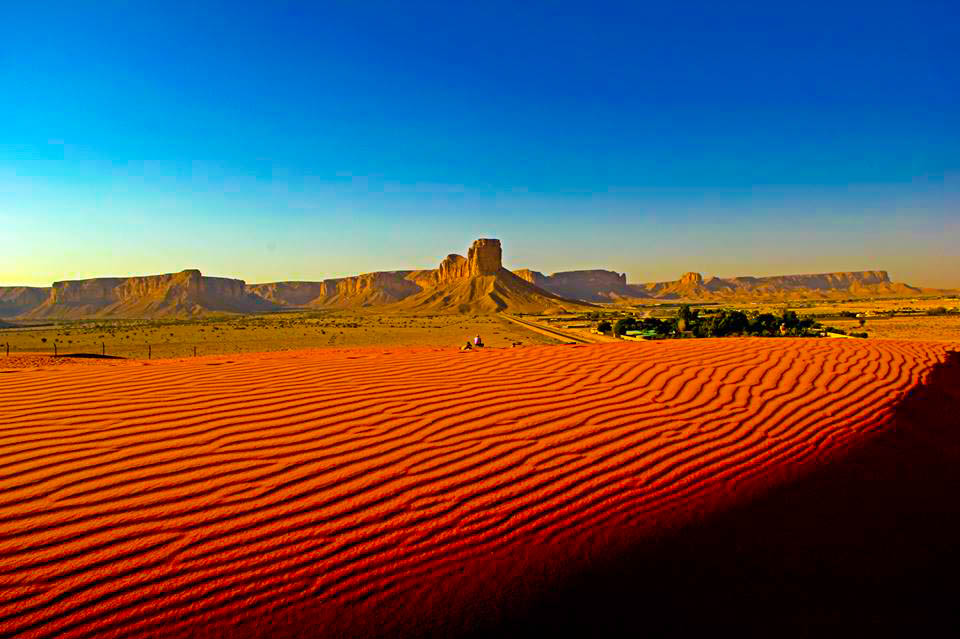 For most innovative research in clean energy, the dreaded “Valley of Death” after lab scale success is the sad place where great innovations go to die for lack of commercial trials.

But that will not be the case for particle heating receiver (PHR) technology that was first conceptualized at Sandia National Laboratories and is now being researched worldwide.

PHR is cutting edge technology for tower CSP, a form of solar that converts the sun’s heat to power. CSP with thermal energy storage is an important key to powering a carbon-constrained future, because its thermal storage enables solar generation at any time of day or night.

There is an unobstructed path from lab to commercialization for Hany Al-Ansary, Professor in Mechanical Engineering at King Saud University (KSU) and international collaborators investigating one alternative approach using a red sand abundantly available near Riyadh in Saudi Arabia.

The KSU approach relies on the sand flowing through a cavity receiver in the tower, while other promising approaches use different particles in free fall or in an enclosed receiver.

Saudi Arabia will be first to commercialize particle receiver technology

The Saudi Electricity Company is funding and assisting with the research into using the red sand approach for heat absorption in PHRs, and intends to enter the planning phase of a commercial trial in 2018. This sort of commercial support and trial is essential to developing technologies.

Like molten salts, sand loses less than 1% of its stored energy daily, but it can achieve a temperature almost twice as high. This is the main reason for the interest in particle receivers, according to Al-Ansary, who holds 15 patents and has published in peer-reviewed journals.

“Molten salt is limited to around 565°C,” he said. “but depending on which type of particles, you can get much higher temperatures, up to 1,000°C. Our group worked on different containment structure designs, and with simple masonry materials and a well-insulated tank, we reduced heat loss to under 1% per day, similar to molten salt.” 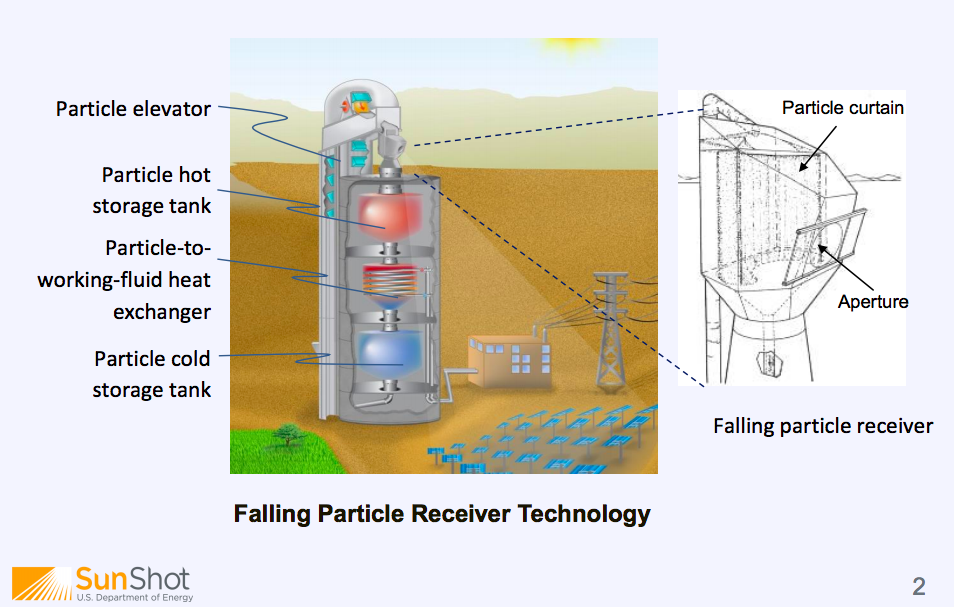 What is the advantage of particle receivers?

Tower CSP with thermal energy storage is an important key to powering a carbon-constrained future, because its thermal storage enables solar generation at any time.

Particle receiver technology has the potential to reduce the cost of tower CSP, because it can nearly double today’s power tower temperatures, which top out in molten salt technology at 565°C.

Researchers have investigated many materials for the particles. The advantage of sand is cost. At 5 MW, this particle receiver design would cycle more than 2000 tons of sand through its system.

“We’re excited about sand because it doesn’t matter how much you need, the cost is almost nothing,” he pointed out. At scale, some materials, particularly engineered particles, could become a considerable fraction of initial costs. “When you are talking about thousands of tons of an engineered material, that can become prohibitive at some point.”

Al-Ansary presented the paper on the results of the red sand tests in particle receiver tower CSP at the 23rd SolarPACES Conference in Chile.

How the particle receiver works

At a 20 MW-electrical scale, the receiver aperture would be about 10 meters wide by 10 meters tall and sand would be fed from the hopper to fall in a curtain a few cm thick through a 10 to 15 meter wide slot, exposing the sand particles to the heat of 1000 suns of intensely focused sunlight from a solar field of mirrors reflecting sunlight into the receiver aperture.

Unlike the energy storage tanks in molten salt CSP, the hot and cold storage tanks could be stacked right inside the receiver tower along with the heat exchanger, so there is much less pumping of storage material, reducing parasitic costs.

For a 20 MW plant, the tower would be about 150 meters tall and about 30 meters in diameter with the storage tanks stacked vertically inside. The discharge point of the cold tank would be about half way up the tower, “so we only need to lift the particles from the middle to the top to heat them.”

The sand particles never fall fast, thanks to chevron-shaped obstacles that slow their descent, an innovation previously tested at Sandia in the US by the international research group. Without the obstacles, sand accelerates to 5 or 6 meters per second, even in just a 1 meter drop height.

The obstructed flow maintains a dense curtain of particles everywhere in the receiver, so that all the concentrated radiation is absorbed by the falling particles.

With particles slowed by the chevrons, Al-Ansary’s group got results of about 1,000°C in the lab without the sand agglomerating, and even out in the field, attained temperatures above 700°C.” 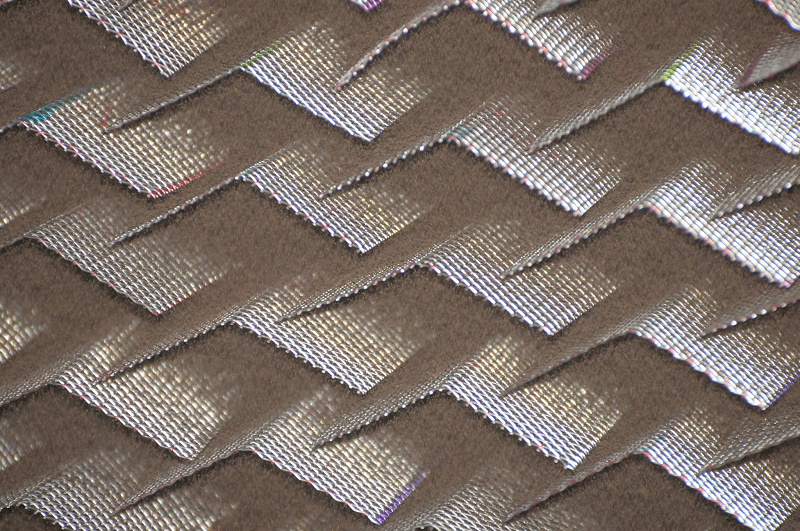 IMAGE CREDIT: Sandia. The particles are slowed by chevron-shaped obstacles

The world’s first commercial particle receiver will be in 2018

In a research field filled with innovation in much needed solar technologies, but not nearly equally visionary commercial support, the particle receiver research group is very fortunate to have backing ready to go.

The Saudi Electricity Company is banking on building the world’s first commercial particle receiver, with the planning phase expected to start in the middle of 2018, following final prototype testing in January and February.

“They said they are actually preparing for the next phase which is maybe around 5 MW. They would like it to be generating and they would like to sell that electricity,” he said.

“Once we complete testing on KSU’s small 100 kW-electrical facility, and as soon as the results from this facility are confirmed, they are ready to go.”

Saudi Electricity Company engineers have even been involved in helping with the research, and there will be an opportunity to tweak the engineering at scale.

“We’ve actually had some engineers from the utility working with us on a daily basis on this project so it is really a joint effort, just making sure that we have a mature design such that when we go to the third phase it will be fully commercial.”

Sandia has a much larger solar field, which was crucial and very useful in early testing, but the Riyadh test facility was small enough to be dedicated to a complete demonstration as a fully integrated power system with a heat exchanger and a gas turbine system – and a first adopter.

Away from Riyadh, parts of Saudi Arabia have an ideal solar resource for CSP (annual DNI of 2,600) the form of solar which needs clear skies. And many remote regions lack grid power.

“Our national utility is excited about this idea because they have many remote areas that are not served by the grid, where 5 or 10 MW is more than enough,” said Al-Ansary. “They told me that the potential just within Saudi Arabia for those areas is roughly a thousand megawatts (1,000 MW). So they can build about 200 of these plants.”

A 5 MW gas turbine that is adaptable to operation with hot compressed air, not steam like a molten salt system, is available commercially. This type of turbine has been tested in the EU using a direct gas heating receiver. This proven design is compatible with the PHR-CSP concept with little modification.

The calm confidence with which Al-Ansary described each step from research to the impending commercialization was unusual. Even though clean technology innovation is absolutely crucial to a livable planet, such access to easy transition is rare. Al-Ansary confirmed it.“Indeed, we are lucky to have this support,” he agreed.