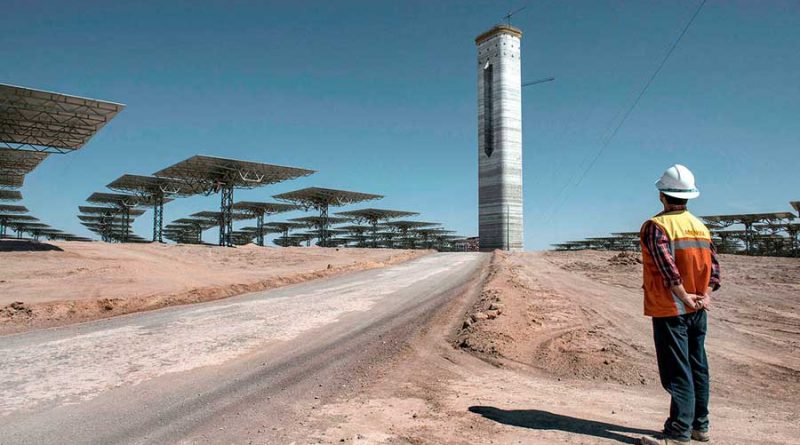 SolarReserve had already developed Likana by accomplishing the preliminary work of siting and monitoring local DNI and taking it through Chile’s environmental permitting process, but was unable to complete it. With its financial heft, Cerro Domiador Group/EIG says that it can now begin construction almost immediately and expects to break ground during the first half of 2020.

EIG, the group acquiring Likana is currently completing the 110 MW Cerro Dominador CSP tower project, that it had earlier bought from Abengoa, when it was unable to complete that project. With new funding from EIG, that project is now nearing completion, with Abengoa continuing as EPC, along with Acciona. Both have considerable experience as leaders in Spain’s CSP development, and will have no language barrier working in Chile.

EIG’s new Likana tower CSP project will be built nearby, in the Llano de Quimal sector, 41 km southeast of Calama in the Antofagasta Region. The proposed CSP tower plant will have an installed capacity of 450 MW, making it one of the largest renewable power plants in the country with expected net annual electricity generation of about 3,150 GWh/year.

Previously, the group had announced that they did plan to continue developing additional CSP plants with the same tower technology. This acquisition starts to brings that to fruition. Although the amount of the purchase is still confidential, it is believed that the initiative involves an investment of US $2.4 billion.

SolarReserve originally developed and built a CSP power tower project in the US, the 110 MW Crescent Dunes in Nevada, and was the original developer of South Africa’s Redstone, but was unable to achieve financial close on its Aurora tower project in Australia, and has since refocused on PV projects. It left a permitted development pipeline in Chile that is a potential source of additional CSP tower projects permitted and ready to be built.

Its 450 MW Tamarugal project (contemporaneous interview with then SolarReserve CEO, Kevin Smith) and the 260 MW Copiapó tower CSP that was permitted in 2015. Both broke PPA bid records, but were unable to get contracts.

Likana will consist of three 110 MW towers, with three power blocks – LIK 1, LIK 2 and LIK 3. The transmission line of the project to the sectioning substation will have an extension of about 61.3 km.

On completion, together with Cerro Dominador at 110 MW, this will bring Chile’s CSP capacity to over half a gigawatt. During construction, the average workforce that will be needed is 800 workers with maximum of 1,200. Once in operation, the plant will require an average of 40 workers and a maximum of 120.

Such a large jump in CSP implementation will create the impetus for a CSP supply chain in Chile. EIGs financial clout and commitment, plus the extensive pipeline of permitted projects left behind by SolarReserve opens the way to remove the obstacle to CSP in that country.

Unlike the solar farms comprising PV panels which can be readily shipped from abroad, CSP’s more complex thermal power block technology relies on local supply chains for much of a plant.

A paper presented at the SolarPACES Conference in Morocco determined that the biggest barrier to CSP deployment in Chile was potential supply chain wariness of retrofitting assembly lines for a potential CSP demand that might not happen. With EIG’s purchase of Likana at such a large size, bringing total CSP tower capacity to over half a gigawatt, the firm’s vision and ambition puts an end to those concerns.

News source of purchase in Spanish: