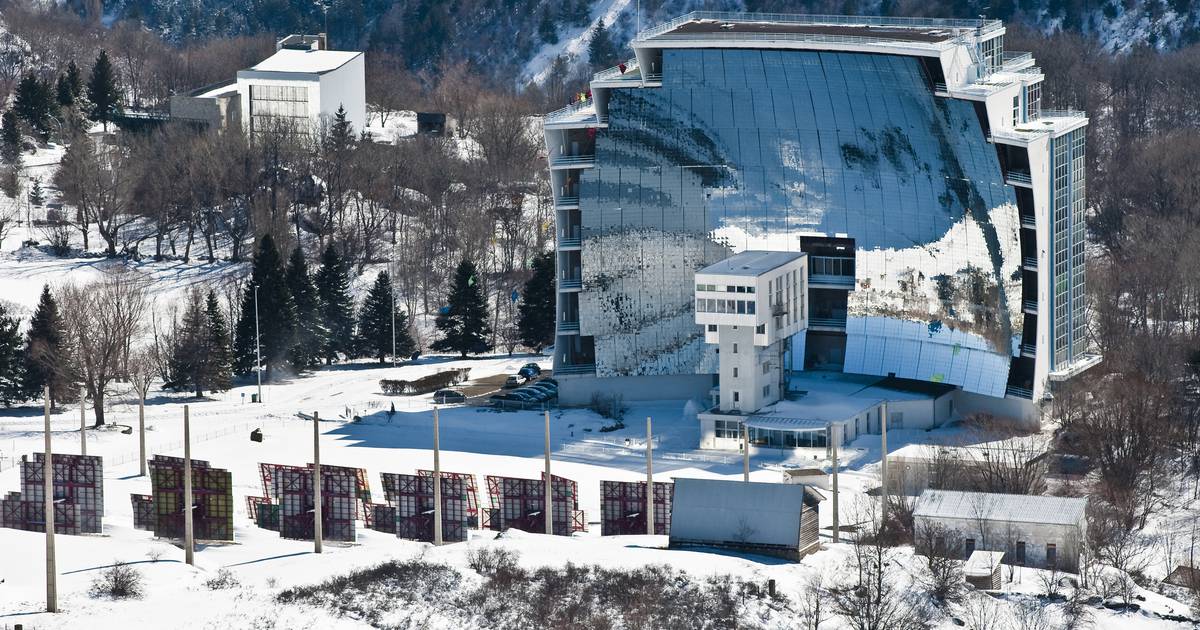 To replace the heat used by fossil fuels in industrial processes, researchers test solar thermal reactor designs at the PROMES.testing lab at Odeillo in the French Pyranees, capable of temperatures of up to 3,000°C IMAGE @ Sascha Burkhardt

Renewable energy researchers have been looking into how to cut CO2 emissions from processing industrial minerals like cement and lime, as these are responsible for a high share of the global greenhouse gas emissions.

For every 10 tons of cement we produce, we release 9 tons of CO2, with much of that through the burning of fossil fuels to heat the reaction.   So, instead of burning a fossil fuel, researchers are investigating substituting a solar technology; a solar reactor that creates the heat needed to process the particles.

Designing a solar reactor for processing cement and lime

An international group of researchers is working on the design of solar reactors operating at 800°C to 1000°C using a rotary kiln and a horizontal bubbling fluidized bed for processing multiple industrially useful particles like cement, lime, phosphate, gypsum and other non-metallic minerals.

They presented their work at the SolarPACES2018 conference in Morocco: Solar Thermal Treatment of Non-Metallic Minerals: the Potential Application of the SOLPART Technology.

Supported by Europe’s SOLPART H2020 project they have already tested a solar reactor at lab scale, one at DLR in Germany, and the second at France’s National Centre for Scientific Research CNRS-PROMES (PROcédés, Materials and Solar Energy).

“We have tested a fluidized bed system at the level of between 10kW and 20kW and now we are commissioning a pilot scale reactor with power of between 30kW and 50kW, able to treat 50 kg/h calcium carbonate,” said author Gilles Flamant, who directs the lab testing solar reactors at CNRS-PROMES, speaking for all the team.

If solar energy is used to substitute for fossil fuels in processing industrial materials like phosphate, lime and cement; solar thermal reactors will be needed because these processes require high temperatures. Providing the heat directly with solar thermal energy is more efficient than heating with solar electricity. 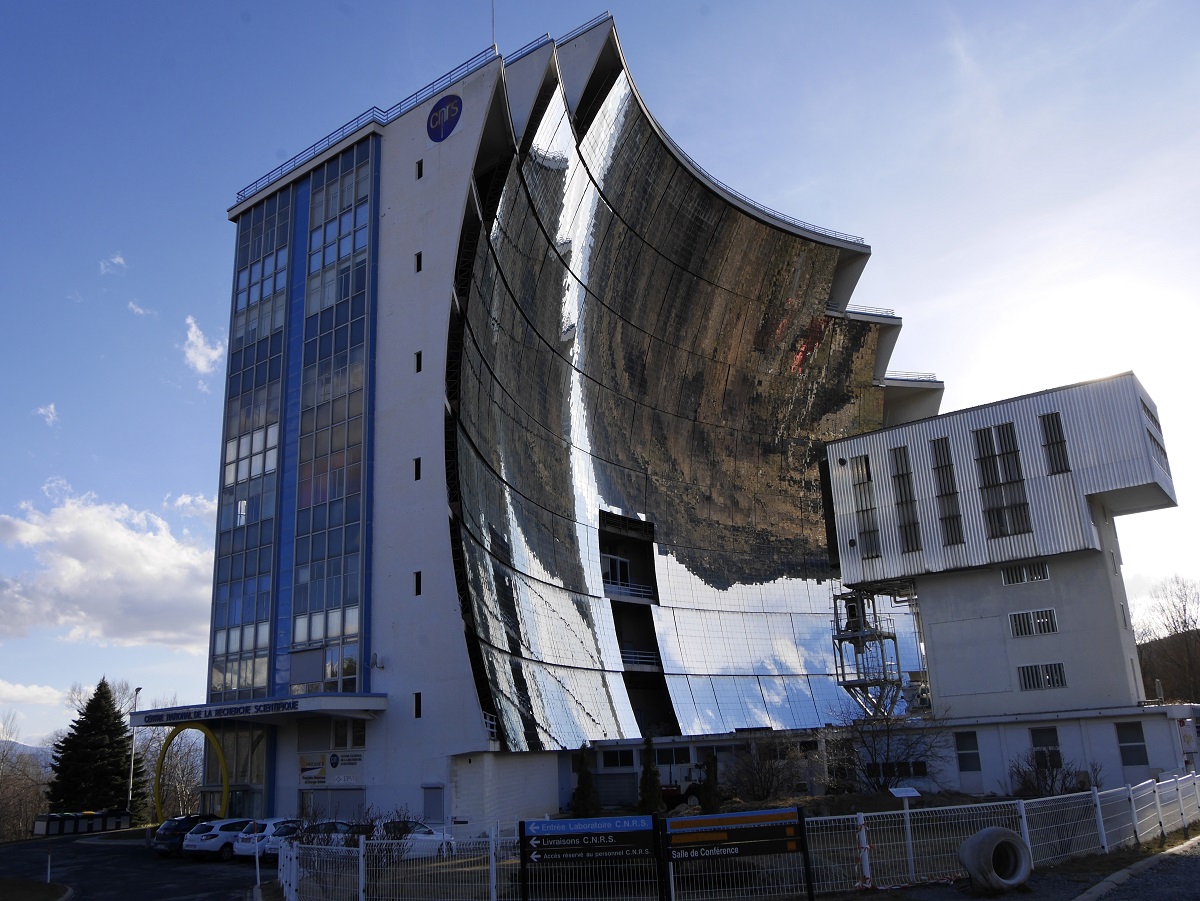 At the PROMES testing site in Odeillo, any temperature range can be tested. “For example, we were able to test our system here at lab bench scale and now we can test it at pilot scale in the same facility,” Flamant explained. “PROMES is adaptable to a large range of solar flux, we can obtain a temperature higher than 3,000°C. IMAGE@PROMES

The PROMES solar reactor testing lab is designed to be adapted for easily changing the conditions for testing different reactor designs for processes operating at different temperatures and scale.

“For example, we were able to test our system here at lab bench scale and now we can test it at pilot scale in the same facility,” Flamant explained. “PROMES is adaptable to a large range of solar flux, we can obtain a temperature higher than 3,000°C.

The researchers have designed their bubbling fluidized bed reactor system to be capable of feeding through not just lime and cement particles but also particles of other non metallic minerals like gypsum and meta-kaolinite, dolomite and phosphate.

A big challenge is that the reactor system must be able to keep all of these various minerals, which all have different particle sizes and behavior, moving continuously through the system without getting stuck.

“Our challenge is to adapt the system to the various type of particles, because there’s a large range of particle diameters in the various non-metallic minerals like lime, phosphate and cement,” Flamant noted.

“The circulation of the particles inside the reactor vessel is also a challenge because you can have some “clogging” – caused by cohesive particles that don’t flow easily, due to a property of the particle itself.”

Next step, testing at pilot scale in 2019

With the 50kW solar reactor already built, the pilot scale test is due to run throughout 2019 with all of its data collected and analyzed, starting in February.

“The next step is to test this pilot scale reactor with various particles during a long period of time in order to check if we can obtain very easily the target; the calcination of the particles,” he said.

“We need to make all the heat and mass balance, and also evaluate the capacity of the system to be applied at large-scale in the phosphate and lime and cement industries by looking at the technology part, and the environmental impact part, but also at the cost part.”

Their SOLPART lab-scale test treated just 5-10 kilograms per hour of lime and cement particles, but now, in their pilot scale test they will treat 50 kg/h of particles.

One of the issues that the SOLPART project is working to solve results from the need for the reactor wall to get to a higher temperature than the particles of lime or cement being heated on the other side.

To supply enough ambient heat to the particles of lime or cement being heated on the other side of the metal wall – a reaction temperature of 850°C in the particles being treated – the metal reactor wall needs to reach 1,000°C.

But this high temperature creates a materials challenge in the metallic wall Flamant said, and in the pilot-scale test, the researchers will see if the materials used can remain stable under these extreme conditions.

The reactor design must also create the precise temperatures required for the reaction in the particles.

“We have to control the solar flux at the wall to ensure that we create the exact heat at the right temperature we need on the particles,” explained Flamant. This is a typical issue being resolved in this kind of advanced high temperature solar reactor design.

What PROMES offers as a unique testing site

At PROMES, at Odeillo in the French Pyrenees, pictured here, a double reflection solar field is employed for testing solar reactors.

Here we see the heliostats in the foreground, the second heliostat on the building and in the middle, the housing for testing solar reactors.             IMAGE @ Sascha Burkhardt

First, a “normal” ground-mounted solar field (How CSP works, trough, tower, Fresnel and Dish) tracks the sun and bounces the sunlight it reflects from flat heliostats up into the mirrored heart of building fitted with a giant parabolic mirror face up one side.

This unique vertical mirror on the building then concentrates the solar flux from the flat mirrors a second time onto a solar reactor out in front of its mirrored face.

“We have a maximum concentration of around 10,000 suns,” explained Flamant. The purpose of this installation is to attain very high concentration that you cannot get with a classical tower.”

For comparison, a solar field in a 100 MW tower CSP plant for delivering electricity reflects only about 500 to 1,000 reflected “suns.”

Solar heat can supply 100% of the total required energy for the calcination of CaCO3 (calcium carbonate) Substituting 100% of fossil fuel consumption with solar heat results in avoiding 40% of CO2 emissions from fossil energy use in calcination.

In a cement plant the initial calcination step accounts for about 60% of the total energy consumption. For the initial step in the calcination process at 900° the SOLPART reactor would be just 1 m long and about half a meter high to move the particles through a bubbling horizontal fluidized bed.

The remaining 40% of energy required would be more difficult to substitute with solar heat in the next step, Flamant said. This is due to the temperature level (1450°C) and the long duration that heat is required in that step.

In traditional fossil-fueled cement processing, this high temperature and long residence time is achieved by employing a rotary kiln that is about 40 meters long. Producing a temperature this high is at the leading edge of solar research, but Flamant suggests that replicating the enormous size of the traditional process presents a more intractable issue.

“My feeling is that the problem of residence time is actually the critical issue in this, not the heat requirement,” Flamant explained.

“In order to make the solid reaction you need a very long time and this is why this furnace is very very long. And this can be a very critical issue for a solar system – this very long period onsite.”

In a commercial application for processing these industrial chemicals and particles at high temperatures, it will not be necessary to have the double reflection concentrating system of the testing site.

To process non-metallic minerals like lime and cement, they need a temperature of about 1,000°C at the reactor wall, which can be obtained with just a normal single solar field of heliostats. A tower receiver and reactor would be atop a tower like a CSP facility.

For processing cement, their solar reactor will replace the first step, cutting 60% of today’s fossil fuel use.

But processing lime holds even more promise. The researchers expect that the pilot scale tests in 2019 will show their solar reactor to be capable of replacing 100% of the fossil energy currently used in lime processing.