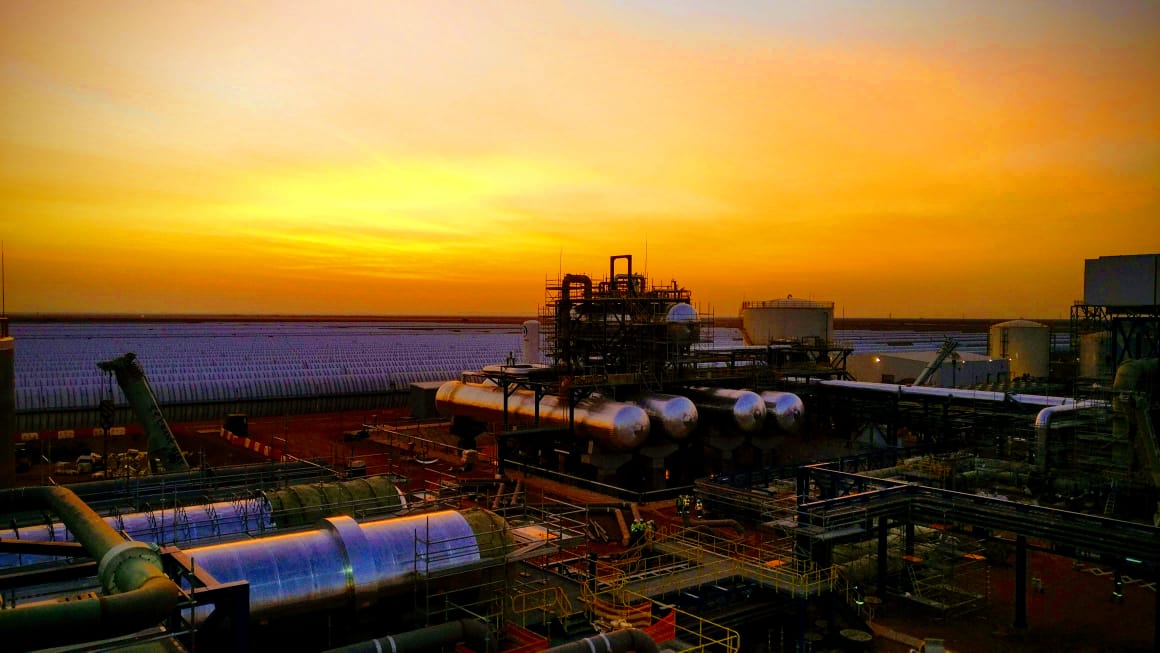 Johannesburg (South Africa), 02 August 2018 – The engineering and technology group SENER and ACCIONA Industrial have achieved another relevant milestone initiating the salt melting process at the Kathu Solar Park Concentrated Solar Power (CSP) plant. The molten salt will be used to store heat from the solar field that can later be recovered to produce steam and generate electricity in the absence of solar radiation, extending the operational capacity of the plant after sunset and during cloudy weather.

Thanks to this molten salt storage system, that allows 4.5 hours of thermal energy storage, the Kathu Solar Park CSP Plant will supply clean energy to 179,000 homes. The plant uses SENERtrough®-2 collectors, a parabolic trough technology, specifically designed and patented by SENER, aimed at improving efficiency of the solar field. The significance of this technology – SENERtrough®-2 and molten salt storage system – is that the CSP plant will not only supply power during sunny periods, but as needed to satisfy the peak of demand, without the considerable expense of battery storage.

Siyabonga Mbanjwa, SENER Regional Managing Director in Southern Africa, commented: “The use of molten salt as thermal energy storage system will allow Kathu Solar Park to operate in a cost-effective manner, storing the generated energy from the sun, producing and dispatching electricity, in absence of solar radiation, to satisfy the peak of demand. At SENER, our aim is to provide the most innovative technology, being compliant with Health & Safety stringent standards, to ensure an outstanding performance and thermal stability for a reliable and sustained energy supply.”

Roberto Felipe, Chief Operating Officer of ACCIONA Industrial, said: “This project is technologically cutting-edge, and the complexity of both engineering and construction is only comparable to large infrastructure projects. At ACCIONA, we are committed to the social and economic development of the regions where our projects are located, and the positive impact this plant is having in Kathu and the surrounding areas is a reason for us to continue executing these projects with these high quality standards. ”

Kathu Solar Park is one of the awarded projects in bid window 3.5 of the Renewable Energy Independent Power Producer Procurement Program (REIPPPP) led by the South African Department of Energy (DOE).

The joint venture between SENER and ACCIONA Industrial was appointed by the ENGIE (engie-africa.com) led consortium to provide engineering, procurement and construction services for the project. Construction started on site in May 2016 and is due for completion within the next few months. Approximately 1,400 jobs are being created during the construction phase.

What are the Pros and Cons of Longer Solar Contracts?

It is estimated that the Kathu Solar Park will save six million tonnes of CO2 over 20 years and will further promote local economic development through the KSP trust and the Kelebogile Trust, which has invested significantly in the local community thus far thereby making a meaningful contribution to the community of the John Taolo Gaetsewe District Municipality.