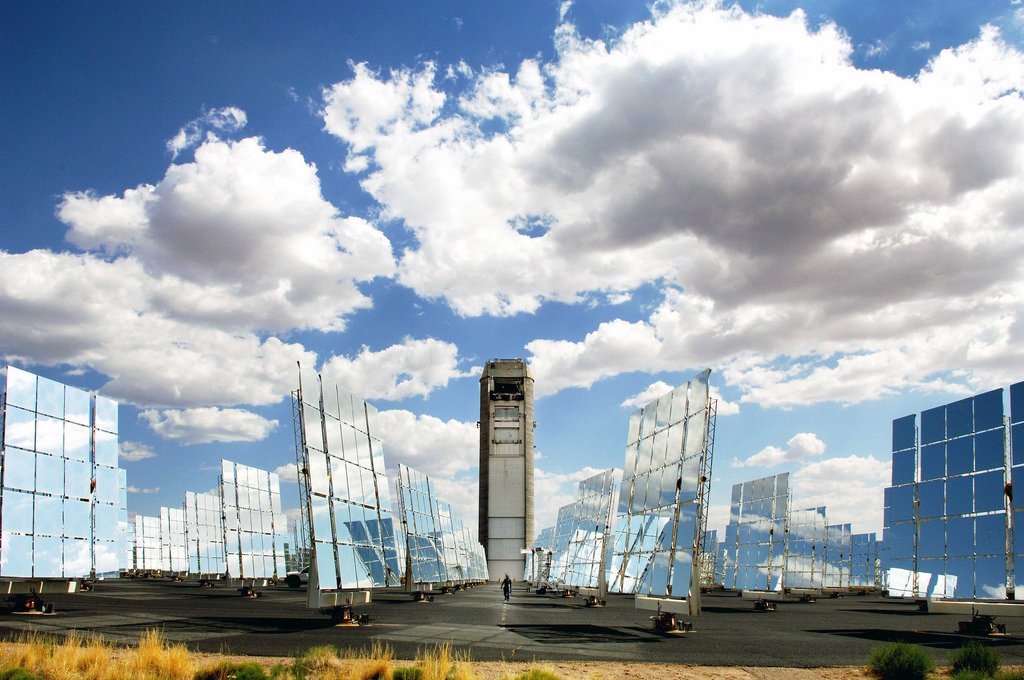 Excess solar flux could be harnessed and used to generate additional electricity at a tower CSP plant, by cladding part of the tower containing the receiver with photovoltaic (PV) panels, according to Sandia scientist Cliff Ho. He found that adding PV on the tower could generate over 10 MW, or 10% of the total capacity of a 100 MW CSP plant, using the same reflected sunlight off heliostats used to focus “suns” up onto the tower receiver for thermal solar generation.

One use for additional direct electric power from PV would be to supply onsite energy needs. So called “parasitic” needs include powering pumps and the electronic drives on the heliostats that move them into the various aiming positions needed throughout the day and night. Parasitic needs can consume as much as 15% of total capacity.

The concept, developed at the United States Department of Energy’s Sandia National Laboratories would utilize the solar flux created when heliostats are not directly focused on the receiver. In a standby position, the heliostats must be focused nearby, so they can be re-aimed quickly onto the receiver when generation is needed. Even mirrors aimed at the receiver can also be slightly off target, just as a result of surface aberrations, misalignment, and tracking errors in heliostats.

“You can actually have on the order of ten to a hundred kilowatts of energy per square meter spilling outside of the receiver,” Ho told an Emerging Concepts audience at the 23rd SolarPACES Conference in Santiago, Chile. “The objectives in this work are to look at the concept of using photovoltaic modules to convert that spillage of otherwise wasted energy to electricity.”

In current commercial tower CSP projects, this area is clad in a heat shield of high-temperature refractory materials above and below the receiver to protect the headers and other infrastructure components from heat damage from solar flux spillage.

“The idea is to put the PV modules on the heat shields, or somewhere else on the tower,” said Ho.

The Sandia team analyzed the levelized cost of energy (LCOE) for cladding the tower in PV to determine if the additional potential energy generation outweighed the additional cost.

The analysis, presented at SolarPACES – of which Sandia and other US national laboratories are collaborating members – was focused on evaluating the LCOE of two types of PV, in several configurations, with and without cooling, in both tower and trough CSP systems.

One challenge was that traditional silicon-based cells work less efficiently under high temperature and high solar flux conditions. Concentrated solar flux is hot at the point of contact. This is essential for concentrated solar thermal applications – but counterproductive for photovoltaic solar.

The Sandia team found they were able to achieve the lowest overall LCOE values for the additional electricity by using a combination of low cost silicon PV cells for regions of the lowest solar irradiance (about 10 to 50 kW per square meter), and multi-junction cells plus active cooling in the higher irradiance regions.

The triple junction cells applied to the heat shields of the central receiver CSP test site were SolAero CTJ cells, designed for concentrated light up to 1500 suns, with efficiencies up to about 39% efficient (at around 400 suns).

Triple junction cells are more expensive than silicon-based PV, but when forced cooling was added, boosting the already high efficiency even further, the LCOE was reduced.

“With forced cooling, you can actually get down to 1 or 2 cents per kWh with PV installed on central receiver configurations,” said Ho.

However, in a tower CSP plant, utilizing a combination of traditional silicon cell PV and triple junction PV, the additional photovoltaic electricity generation was significant at a low LCOE. PV could add another 10% of a plant’s total capacity, or over 10 MW on the tower of a 100 MW tower CSP plant with LCOE of under 5 cents per kWh.

Tower CSP (concentrated solar power) is a thermal form of solar that uses reflected sunlight off mirrors (heliostats) that track the sun to remain focused onto a receiver at the top of a tower, where the reflected and concentrated sunlight, or solar flux, heats a molten salt mix of sodium nitrate and potassium nitrate (common chemicals also used in agriculture) to about 565 C. This hot liquid then descends the tower where its heat is extracted, creating steam which is used to generate electricity in a traditional power block.

Once the heat is extracted, the liquid salt mix is then stored in the “cold” tank (at about 230 C), ready to be once again sent up the tower for reheating and the cycle begins again. Alternatively, the hot liquid can be sent first to the hot storage tank where it remains available for use at any time to be sent the power block to generate power. This inherent thermal storage is why CSP is a form of energy that is dispatchable and on demand. 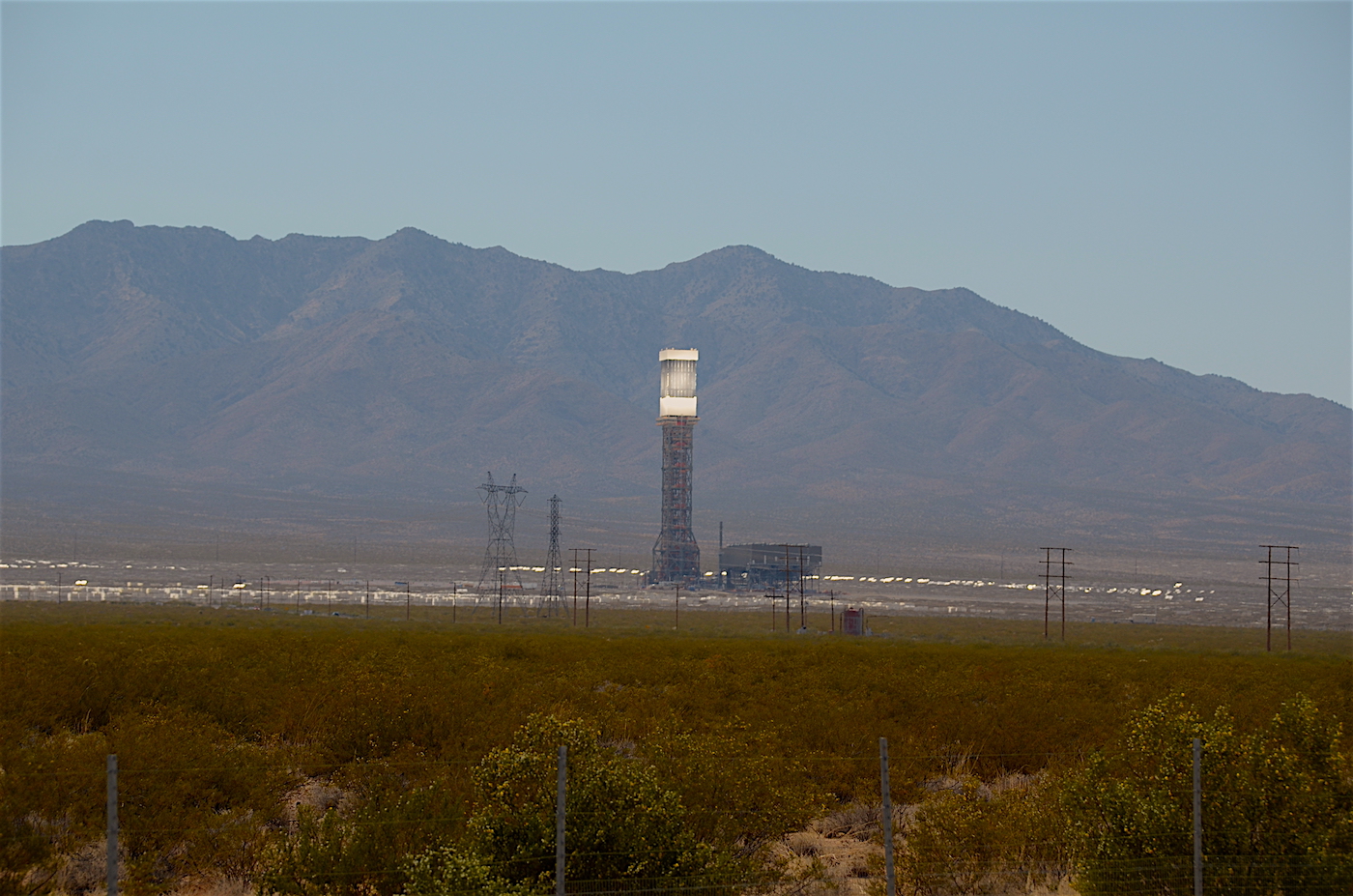 At Ivanpah (shown) an estimated 1,000 square meters of heat shield area (white: above and below the receiver) would be available to accommodate PV on the heat shield area of each of its three towers.

The 377 MW Ivanpah tower CSP project in the Mojave desert works differently than typical tower CSP – with a direct water-to-steam form of tower CSP, and no thermal storage.

As a result of the lack of storage, a direct water-to-steam tower CSP plant like Ivanpah must direct heliostat focus off the receiver quite often during the day. However, aiming thousands of “suns” of concentrated solar flux into one spot away from the receiver at the top of the tower creates a solar flux bright spot near it in the sky.