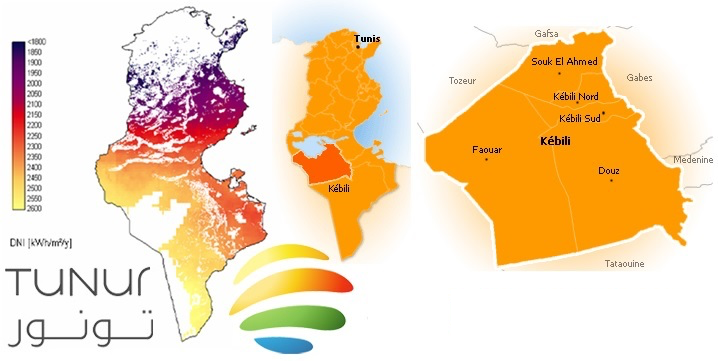 According to Power Technology, TuNur applied to the Tunisian Government to begin construction of their proposed 4.5GW concentrated solar power (CSP) project in the Sahara Desert at a price for power that is expected to be 8.73 cents per kilowatt hour, much lower than suggested three months ago.

[Ed note: when SolarPACES interviewed TuNur CEO Kevin Sara in September, Sara said he was considering a possible price of 10 cents per kWh, but was still gathering quotes from contractors and said it might be lower.]

If successful, the energy generated will be transported via underground cables to Italy, Malta and France, providing Europe with a new, carbon-free, alternative base load power source.

“The TuNur project is a fully integrated solar export project, so it combines the generation of solar energy in Tunisia with dedicated transmission links to the European network,” explains TuNur chief operating officer Daniel Rich.

The project will be located close to Réjim Maâtoug in the Kébili Governorate, in the south-west of Tunisia where TuNur has agreed to lease land from a local tribe. In the summer, temperatures here reach highs of 34°C with as much as 12 hours of sunshine a day.

When fully constructed, the project will cover an area three times the size of Manhattan. Hundreds of thousands of parabolic mirrors will be arranged to direct the intense Saharan sun at CSP towers reaching as tall as 200m. Heat will be stored in molten salts that run through these towers, heating steam to turn turbines but also, as the salt can hold heat for hours, power can be generated long after the sun stops shining.

If given the go-ahead, Sahara solar could provide power to two million European homes. This concept is not new, but until now it has been unsuccessful. So what makes TuNur’s different?

“What we’re doing is essentially competing against the other forms of high-capacity factor or storage-based low-carbon technologies in Europe, so that’s PV with electrical storage or things like offshore wind, new nuclear and so on,” says Rich.

When the project was first proposed, TuNur had not made a firm decision on which solar technology to pursue. However, it was confident of the need for energy storage capability, to ensure it was not simply another renewable provider in the European market, but able to offer something unique.

“Because we had to integrate storage in some form, do we go with CSP with integrated storage or do we go with PV with batteries, or a hybrid of the two?” says Rich.

TuNur argues that CSP offers the most economic source of stored power at present. “CSP is thermal generation and therefore the storage element is actually thermal storage rather than electrical storage,” Rich explains. “Today, thermal storage is cheaper and more efficient than battery storage.”

The first stage of Sahara solar will see a 250MW CSP tower constructed, along with a dedicated transmission line through the Mediterranean Sea to Malta. This phase is estimated to cost €85m, and a further €1.6bn for the cable link.

As such, the cost of power is expected to be 8.73 cents per kilowatt hour (c/kWh).

Solar PV is estimated to cost 7.7c/kWh for generation alone in Tunisia. Elsewhere within the Middle East and Northern Africa (MENA) region, the price of CSP has already seen dramatic reductions.

Earlier this year, the Dubai Electricity and Water Authority announced that the fourth phase of its 200MW Mohammed bin Rashid Al Maktoum solar park included bids as low as 6.3c/kWh, while SolarReserve in South Australia achieved prices as low as 5.2c/KWh, and its project in Chile in 2016 hit 5.7c/kWh.

As the cost of CSP has dropped it has become increasingly competitive with other sources of dispatchable power. “We believe that by deploying CSP in Tunisia and generating the power there, that even with the additional costs of the transmission links to Europe we are a much more competitive solution for the Europe markets than those alternatives,” says Rich.

Furthermore, CSP offers a host of local benefits. TuNurs alone promises up to 20,000 new jobs. “With CSP technology, up to 60% of capex can, in theory, come from local companies, so there’s a huge foreign direct investment and socio-economic development opportunity for Tunisia without restricting Tunisia from also doing this for their domestic supply,” says Rich.

CSP arguably provides greater local investment opportunities than a PV project would, as there is a higher percentage of local manufacturing; PV panels are generally imported, so require less on-site construction, creating fewer local jobs. “CSP is more of an infrastructure project whereas PV has become quite a simplified commodity almost,” Rich says, adding that “There are more challenges, but the construction industry is gearing up and has already geared up to be able to accommodate that.”

Is the Sahara the Holy Grail of solar?

For years solar power projects in the Sahara have been talked about, hailed as a potential Holy Grail of renewable power. The Great Saharan Desert is more than 3.6 million square miles of dry, hot land, 1.2% of which could power the whole world, theoretically, if it were to be covered in solar PV.

But the Sahara’s solar potential is yet to be realised, with only the Noor project in Morocco currently operating in the area. There are a number of reasons for this, including political instability in the MENA region putting off potential investors. Furthermore, the cost of transmission, solar panels and plant maintenance has dissuaded investors in the past.

The Sahara has long been viewed as a potential battery for Europe, using CSP. In 2013, the €400bn Desertec project collapsed after the two advocates, Desertec Foundation and the Desertec Industrial Initiative, fell out, each accusing the other of poor communication.

TuNur believes that now is the time for solar in the Sahara to finally take off. “If you look at the fundamentals, I think there have been technical challenges to overcome up until now in terms of what is the right technology to deploy in the Sahara, including the development of the transmission, in particular submarine transmission sector,” says Rich.

If the TuNur application is successful and the project comes to fruition, it could mark an important step for Saharan solar, CSP technologies and European green goals. As Rich says, “Our focus today is getting all the permits and the authorisation in place in Tunisia and in Europe.

“At the moment, based on the work that’s been done to date and the remaining development steps, we believe that we could enter into financial close and begin construction for phase one by the end of 2019. We estimate two and a half to three years’ construction time before commercial operations.”