Home >Latest In:>CSP News & Analysis>Which is the Most Efficient Way to Make Solar Fuels from Methane? 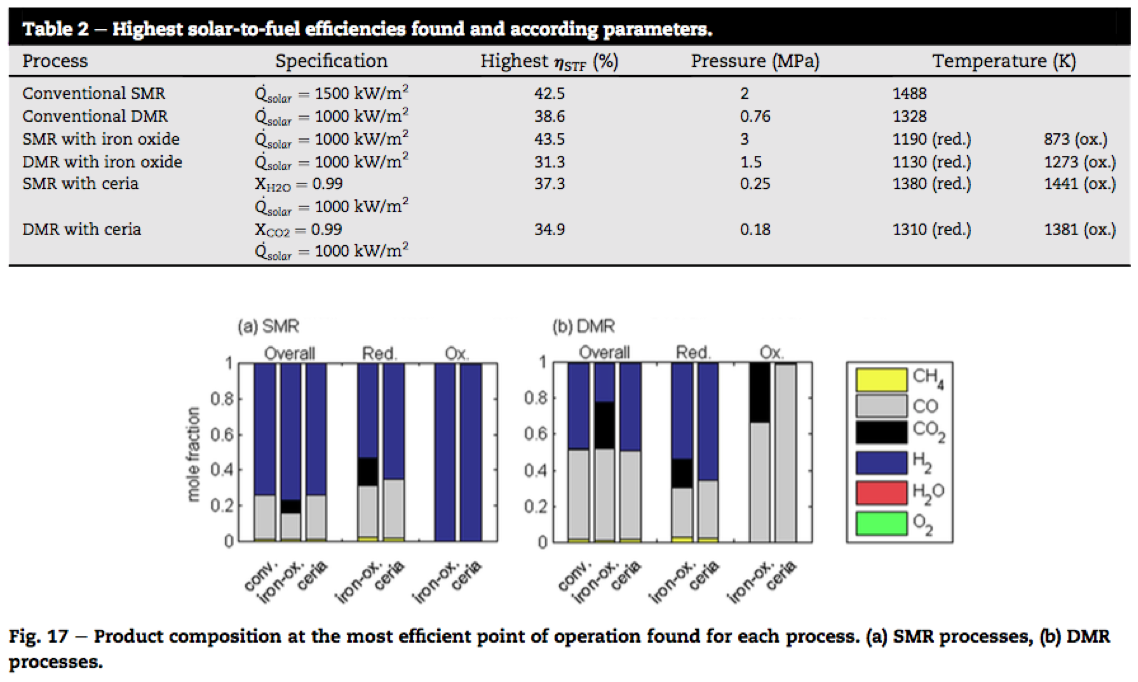 Solar fuels like hydrogen have the potential to be next generation energy carriers for a carbon-constrained world.

Green hydrogen and other solar fuels could replace fossil fuels used for most transport; replacing heavy fuel oil used by container ships, the jet fuel used to fly planes, and the diesel and gasoline used by heavy road transport. Solar hydrogen could also replace natural gas in power plants and in the many industrial applications that require heat.

Till now, the way hydrogen has been produced commercially burns fossil fuels to heat steam methane reforming (SMR). But we know that using fossil fuels for heat is incompatible with a stable climate.

So the heat for this process can instead be supplied directly to a solar reactor by concentrating thousands of “suns” of solar energy from a field of heliostats and using a metal alloy catalyst to extract hydrogen and carbon from methane (CH4) – which contains both elements.

More recently however, there has been a great deal of research focused on using a redox material like ceria or iron oxide in solar methane reforming, instead of the metal alloy.

But which is the more efficient solar process? A recent study has sought to compare the reference case of solar reforming of methane with a metal alloy, with the solar redox processes using iron oxide or ceria.

A team at DLR has just published the Efficiency assessment of solar redox reforming in comparison to conventional reforming at the International Journal of Hydrogen Energy comparing the solar-to-fuel efficiency of both redox and conventional solar methane reforming, and not only for SMR, but also for dry methane reforming (DMR), which uses CO2 instead of steam.

“Solar dry methane reforming is of particular research interest in recent years because it includes carbon capture from air, which is an important step towards solar fuels that close the carbon cycle and this is what people are really interested in nowadays. So it is being researched a lot,” noted Philipp Holzemer-Zerhusen, a lead author of the study.

Both SMR and DMR processes produce syngas (H2+CO). However, the H2 to CO ratio is different. While SMR produces more hydrogen, syngas from DMR has higher carbon monoxide content. unlike conventional methane reforning over a metal catalyst, in redox reforming the production of syngas is divided into two steps, leading to two separated product streams.

So redox reforming not only produces a syngas that can be further processed to synfuel, but also a valuable high purity hydrogen (in case of SMR) or additional carbon monoxide (in case of DMR).

“We showed that steam methane reforming based on iron oxide redox cycles can compete with the conventional solar reforming technology in terms of efficiency,” said Holzemer-Zerhusen. “We also showed that it can operate at significantly lower temperatures – which is also important.”

The lower temperature required in iron oxide reduction contributes to the high efficiency, which would lower solar field costs with this SMR redox material, because it takes a larger solar field with more heliostat “suns” to create higher temperature and solar flux at the reactor. In addition a high temperature makes the reactor construction more challenging.

The results in the paper: “We investigate a two-step redox cycle with iron oxide and ceria as candidates for redox materials. We found the highest efficiency of a redox cycle to be that of steam methane reforming with iron oxide. Here the solar-to-fuel efficiency is 43.5% at an oxidation temperature of 873 K, a reduction temperature of 1190 K, a pressure of 3 MPa and a solar heat flux of 1000 kW/m2. In terms of efficiency, this process appears to be competitive with the reference process.”

The attraction of the redox process is that in the future it could be commercially viable to manufacture hydrogen or the various hydrocarbon fuels without fossil fuels at all; redox materials can be used to split hydrogen directly from water rather than from methane, and to split carbon directly from CO2 in air to make solar fuels.

Holzemer-Zerhusen believes that redox reforming has the potential to play an important role in the development of solar redox cycles as a transition technology towards carbon-neutral redox cycles.

Startups like Carbon Engineering and Climeworks have begun to make direct air capture commercially available, facilitating the manufacture of carbon-neutral solar fuels as the next step.

Ceria is one of the most widely used redox materials researched for solar syngas production, with the ability to release a certain amount of its oxygen and then in its reduced state, to split water and carbon dioxide. So it is surprising that the study finds that as the redox material for solar redox SMR, ceria actually compares poorly with iron oxide in terms of solar-to-fuel efficiency.

However, there is also a reason to favor ceria as the redox material in steam methane reforming: it has higher product quality with no significant CO2 impurities, which dilute a pure product stream of syngas.

While redox SMR with iron oxide has greater solar-to-fuel efficiency, it does include CO2 impurities, which makes a syngas that is less suitable as the precursor to liquid fuel production.

“That depends on who you ask,” said Holzemer-Zerhusen. “Somebody who I tried to sell a syngas product to would be interested in the product quality but solar to-fuel-efficiency is also important to those who are looking for the process that is the most economically competitive.”

And both ceria and iron oxide can produce high purity hydrogen.