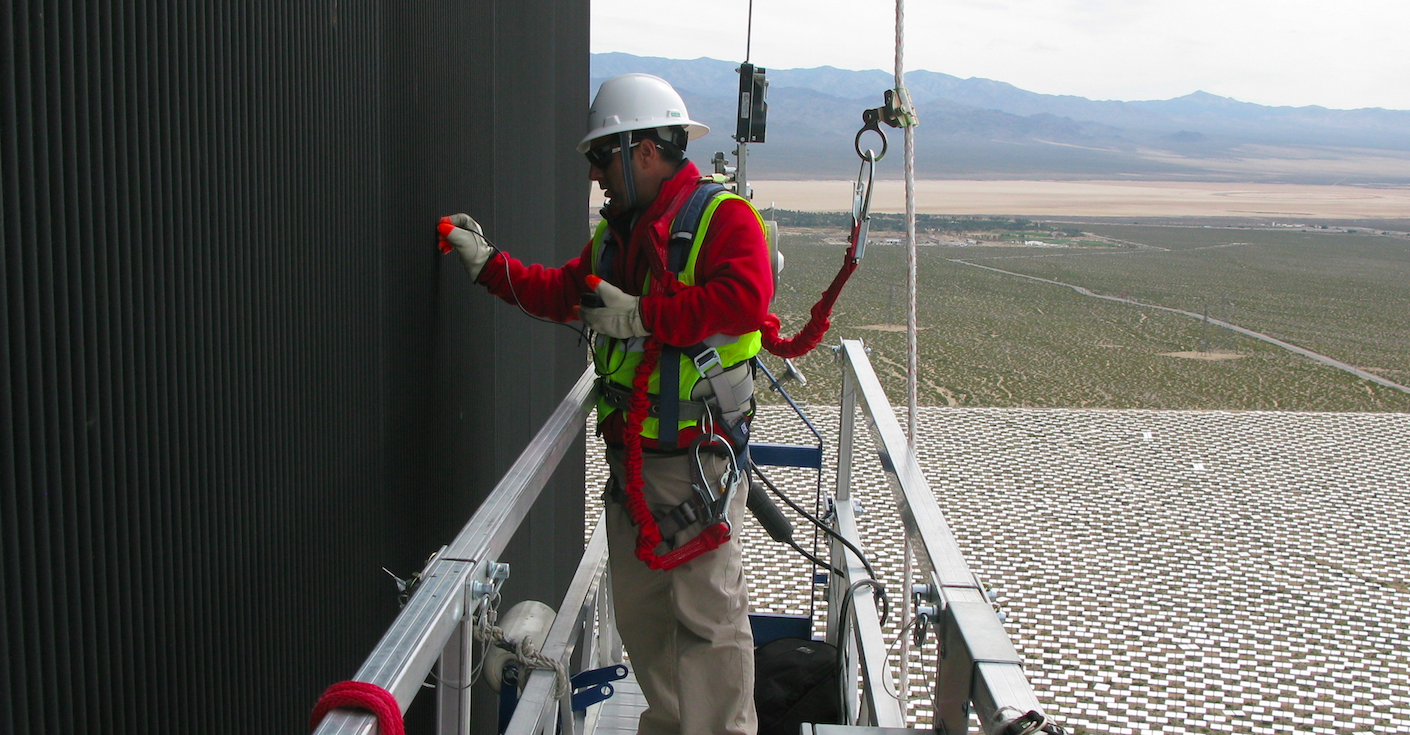 At one of the three towers comprising the 392MW Ivanpah CSP project in California, Brightsource Director of Chemistry, Yaniv Binyamin checks the coating on the receiver panel, in a sky climber IMAGE@Brightsource Energy

Testing laboratories in Germany, France and Spain have confirmed the effectiveness of a new high-performance (97% absorbance) optical coating developed by Brightsource Energy, that can be “solar-cured” directly atop the receiver of tower CSP, like Brightsource is building as part of the ACWA Power 700 MW DEWA CSP project in the UAE for the Dubai Electricity & Water Authority.

To repair the coating on a CSP tower receiver (how CSP works) till now, these plants have had to be shut down so the entire receiver panel can be taken down off the tower and sent to a workshop where it gets sandblasted to remove the remains of the old coating. The whole panel gets recoated, and the new coating is cured in large furnaces – which are heated by fossil fuels.

Every day of downtime – depending on plant size and its particular off-taker contracts – can incur losses in the hundreds of thousands of dollars. The standard coating – one by Pyromark, originally designed for the boiler industry; is not optimized for cycling between daily temperature extremes like CSP is subject to – and must be cured in a furnace. So developing a durable absorber coating that solves these problems is very important for operating tower CSP profitably.

The receiver in a tower CSP plant is made up of multiple 2 inch diameter tubes welded together in a continuous panel. To transfer the heat, a watery liquid molten-salts mix of potassium nitrate and sodium nitrate flows down inside the tubes, while the coating “skin” on the outside of this panel is subjected to heat up to 750°C as the solar flux reflected from the concentrated sunlight from the solar field of heliostats (mirrors) is concentrated on it.

Due to daily cycles of being heated up to 750°C during the day and cooling down at night to sometimes below zero, in harsh sandy desert conditions, the coating on the receiver panel is subject to extreme temperature swings.

Depending on local climates, this also includes higher or lower humidity, while in nearly all desert regions, the much lower night time temperature also causes condensation on the coating as it cools from the extreme heat of the day’s focused solar flux. Over time this absorber coating becomes degraded and needs repair.

Solution: a better coating for DEWA CSP – which can be cured by sunlight

The idea was to develop a coating that does not need to be cured in a furnace but can be recoated in situ when needed and cured in sunlight, at the receiver up on the tower. So Brightsource Energy has developed a new kind of absorber coating that is sun-cured, that is designed for higher absorptance (α>97%) and longer service lifetime than the standard Pyromark coating. These improvements promise to cut O&M costs at the record-setting CSP DEWA project.

The DEWA CSP tower plant will be the fifth for Brightsource Energy. Generating since 2014, their 392 MW Ivanpah project in California is made up of three separate towers each with its own solar field. In 2019, they commissioned their 121 MW Ashalim tower CSP project.

For the record-low cost DEWA CSP project (delivering solar power to Dubai at 7.3 cents/kWh with 15 hours of thermal energy storage) Brightsource is partnering in a joint venture with Shanghai Electric, as SEBS, on the 100 MW tower plant. It will be their first to include storage.

SolarPACES spoke with Brightsource director of chemistry Yaniv Binyamin in Shanghai where after some difficulties, he was able to book a Skype connection in the conference room of the Chinese boilermaker on the project. “It is very challenging work here,” he laughed, when we finally managed a connection.

To develop the coating, he said he built on broad Brightsource experience from R&D to O&M, with Ivanpah and Ashalim all coated with BrightSource’s coating systems tailored for specific sites’ climate and operational conditions. Binyamin noted that thermal stresses affect the metal-film interface as well as film uniformity.

“We learned from the experience with the other tower receivers, though each is a little different. Ivanpah and Ashalim are both direct steam, but the receiver materials and climate conditions are different; Ivanpah is a very dry desert while Ashalim is in humid desert conditions, so we tailored the coating system and the O&M methods accordingly. Although DEWA is a molten salt receiver we are very much familiar with its receiver material, operational conditions and tailored a high performance coating that’s easy to apply and extremely durable,” he said.

Because a sun-cured coating does not need to be cured in a furnace, it can be repaired in just the time it takes to repaint it in place, greatly reducing downtime, up on the tower during a maintenance outage or even repaired between operation days at night.

“To get up the tower, we use a lift called a sky climber, “explained Binyamin. “Once the lift takes you up, you’re on like a balcony for the tower. And it is permanently there. And up there we have a cabinet with all the needed equipment.”

Testing for Brightsource in national laboratories in Germany, France and Spain

To test the formulas, he collaborated with Florian Sutter and Simon Caron, DLR researchers working at Plataforma Solar de Almería (PSA) owned by CIEMAT in Spain. At the Jülich testing site in Germany, run by DLR’s Institute for Solar Research, further testing of next generation coatings is planned.

“What Florian and DLR offered me is to put a sample of my coating formulation on the real metal at the focal point of the solar dish so we could test it in real conditions – because the climate at the PSA site in Spain is the same as in Dubai – and to screen the best formulation in the real professional temperature. At PSA they can simulate the day and night cycles and we are doing accelerated testing,” he noted.

“The higher the temperature the more likely it is that the coating will fail,” explained Caron. “We are doing different tests of optical characterization, solar absorption. We check if the coating complies with its specifications, its high solar absorptance and the degradation against different environmental loads such as sand erosion or salt spray, but also an important factor is solar flux and temperature.”

The losses would seem to be relatively minor since all CSP receiver coating absorptance is over 90%, but in terms of revenues, that is not the case, according to Caron. “There is, in a worst-case scenario, say that we start from 97% solar absorptance and drop to about 92%. That truly makes a difference for the plant performance: Every point of absorptance change is one point of efficiency gain.”

The researchers then tested the Brightsource coating against three other possible coating options within the RAISELIFE project funded by the European Commission.

“For this project we tested four absorber coatings in different tests carried out by ourselves and our partners Fraunhofer, INTA, Dechema and CNRS. This coating from Brightsource was very stable and reached the highest solar absorptance,” said Sutter.

“It has a very high absorptance of 97% and also a very good lifetime, shown at PSA. As a result of our testing activity, this was chosen to be employed in the receiver of the solar tower at the DEWA CSP project, so it goes directly to commercial application.”

All MENA CSP Now 7 Cents or Under Says ACWA Power