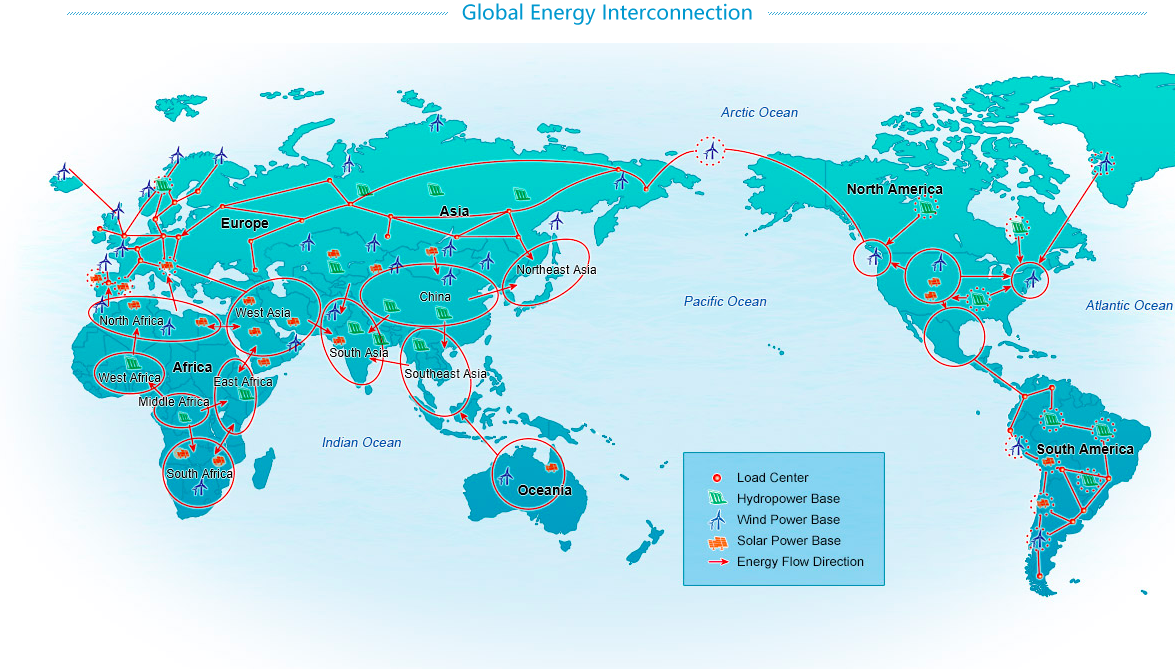 China has an ambitious proposal for a global HVDC grid to transfer renewable energy throughout the world. Interconnected regional electricity networks would be connected to a backbone of HVDC lines that would become a globe-spanning super grid by 2050.

Advancing the idea is China’s Global Energy Interconnection Development and Cooperation Organization (GEIDO). The concept depends on the proficiency of China’s State Grid in advanced grid technology that would enable such a massive project.

“The vision is to integrate more renewables, so you can put a lot of solar in desert areas and send it to the places where it’s needed,” said solar policy researcher Alina Gilmanova in a call from Beijing.

“Then we could partially resolve the problem of storage, because in some places it’s sunny and in others it’s after sundown. You can produce in sunny places and send it into the night.”

There would be overall benefits to all renewable generation in such an enlarged grid, allowing for a much greater expansion across time zones and from distant regions with excess solar or wind resources, both onshore and offshore.

For CSP, it could be like an updated version of the Desertec Initiative idea, which had failed by 2013 in part for lack of the massive interconnection grid needed to deliver solar power from North Africa to Europe. But now, China’s State Grid, one of the largest organizations in the world, has eliminated the obstacle of cross-continent HVDC interconnection.

Implications of an expansion of Desertec for CSP

“What I’m trying to understand is how such a global grid might benefit CSP,” said the Russian-born Gilmanova, whose research has taken her from a PhD in Brazil to a post doc in Concentrated Solar Power (CSP) policy at the solar research lab at the Chinese Academy of Sciences.

She presented her paper The Role of Concentrated Solar Power in the Internet of Energy at the SolarPACES Conference in Morocco. The title references GEIDCO’s metaphor: that an interconnected global energy grid would be like today’s networks that carry the internet around the world in undersea cables.

She said that the concept of an Energy Internet has become very popular recently within China. “And China’s idea of a global interconnected grid is also more or less an expansion of their Belt & Road Initiative,” she noted.

“And then China’s State Grid also sees the concept as a business model that they would benefit from because they already sell high voltage lines and interconnecting the whole world is obviously the biggest market.”

She noted  that fossil fuel would also be shipped on this grid: “Even with 100% interconnection, the grid would still need around 35% of dispatchable sources, according to GEIDCO. Their models project that CSP could provide 12% of that.”

“GEIDCO doesn’t see a completely renewable grid,” she conceded. “But from a technical point of view, CSP could help to replace some fossil fuel, giving a renewable grid a more firm electricity supply.”

The Chinese government has followed Spanish Feed-in Tariff policy designed to nurture a sturdy domestic CSP supply chain with financial protections during the engineering phase of developing China’s “first samples” of 5 GW of CSP by 2022.

“Feed-in tariffs introduced by the government enabled a more rapid development of the national market and more companies entered the CSP sector, and this national market provides them with their references, so now Chinese CSP companies are eager not only to cover the domestic market, but also to go abroad,” Gilmanova said.

But as the “new kids on the block” compared to more established Spanish players, China’s investment could deliver bigger returns if they could serve a wider market globally. As an example, she pointed out that the Belt & Road Initiative has funded the construction of CSP plants outside China “and that was partially to benefit Chinese companies, as we saw with the DEWA project in Dubai.”

Gilmanova sees both pluses and minuses for CSP. With its thermal power block technology, CSP could replace coal and gas plants yet help reduce coal and gas plant unemployment as the world decarbonizes. But a wider grid would also enable the deployment of more PV and wind, further decreasing their already low costs.

“So this decreased of cost of renewable electricity would also bring more competitive challenges to CSP,” she said. “But government could choose to support the development of CSP because of its similar characteristics to a conventional thermal power plant, to transition coal plant workers, for example.” 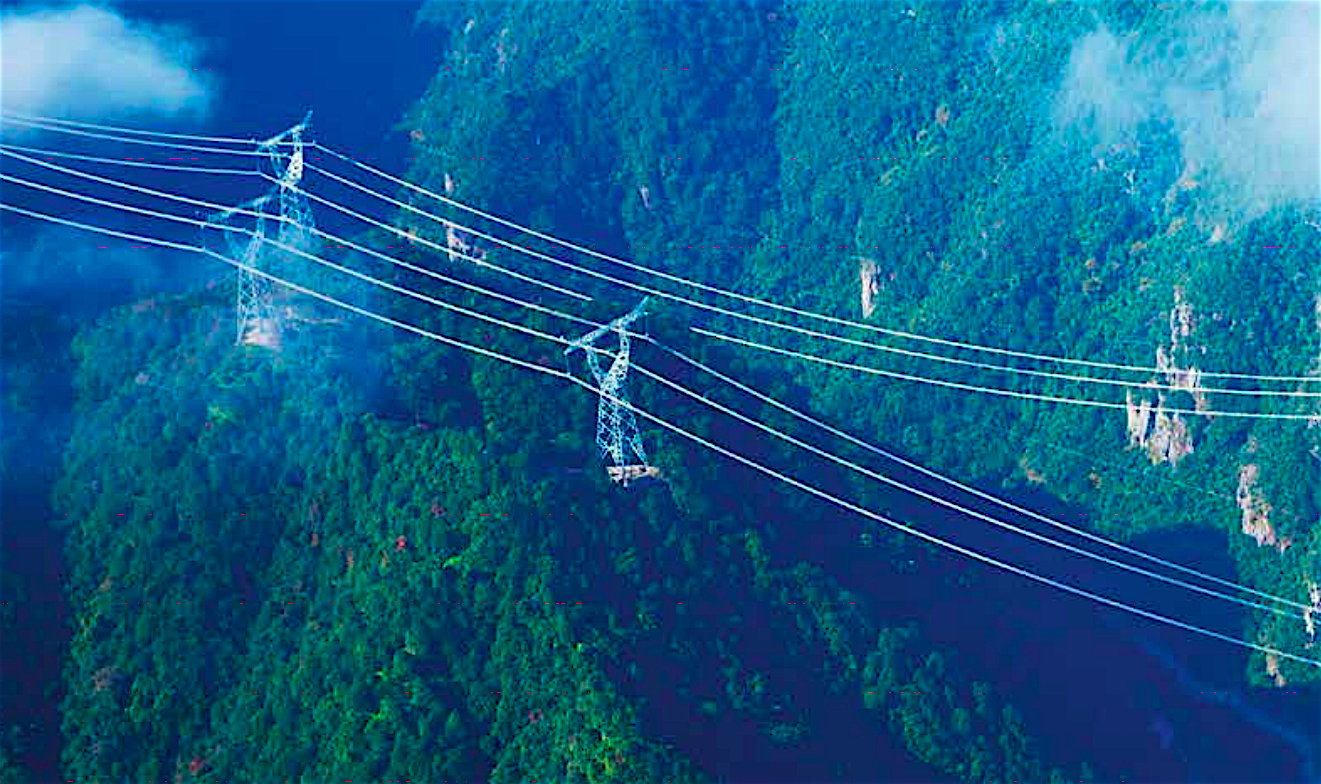 China is now the world leader in the development and deployment of grid technology able to transmit massive amounts of electricity over long distances without significant losses so operators can balance consumption and generation across an entire continent, or, potentially, most of the globe.

The HVDC lines it began building in 2018 are able to deliver 150 GW of electricity 23,000 miles away, according to an MIT presentation by the former president of China’s State Grid Corporation,

Within its own borders, China already has installed the world’s most extensive network of high voltage AC and HVDC at a scale and at a degree of technical advancement that dwarfs the rest of the world’s grid technology.

Its own planned nationwide super grid will connect six regional grids bringing fast-growing wind and solar from the north and west to its densely populated eastern cities. China invested $65 billion in 2018 and plans $65 billion each year for the next five to build up to 20 ultra HVDC lines in the 800-kV to 1100-kV range.

But geopolitics is a challenge. Interconnection is possible technically, but political barriers remain: “Interconnection might be perceived normally as a very reasonable vision because it has so many advantages, but one of many problems the initiative faces is the perception of China by western countries, which is not usually positive,” said Gilmanova.

“I don’t think this is always fair, but the most important political barriers for interconnection projects is trust and how to build it between countries. The more dependence on each other, the more risks.”

Transmission obstacles in Europe and America

The idea of delivering energy globally is not without precedent. Tankers deliver natural gas and crude oil across the world’s oceans. Despite recent resistance to dependence on Russian gas in Europe and climate protests against Canadian oil shipments in the US – oil pipelines are able to get built and do deliver fossil fuels between nations without obstruction.

But permitting transmission lines within the EU is very slow and difficult, and is nearly impossible within multiple local jurisdictions in the US – let alone cross-continental HVDC.

“Grid expansion may work fast in China, as the government just decides directly,” said SolarPACES head, Robert Pitz-Pahl. “However, what we see in practice is an opposite trend towards decentralization. But the set-up of a global super-grid has always been the dream for a low cost and renewable electricity service.”

International oil companies have demonstrated the political power to overcome obstructions to delivering their energy internationally. But China’s State Grid with its million employees now rivals these oil majors in reach.