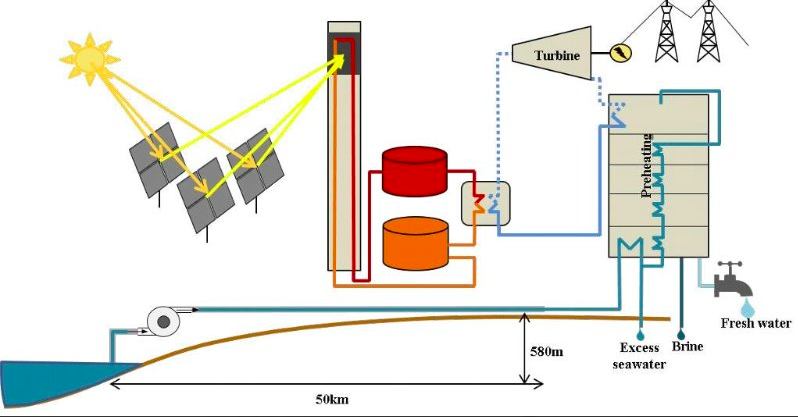 Seawater desalination can be integrated into a solar thermal energy plant using a variety of desalination technologies. Is solar-driven multi-effect distillation a financially feasible solution for water-stressed Namibia?

A research study from Stellenbosch University finds that a 100 MW concentrated solar power (CSP) plant adapted to also “co-generate” water via multi-effect distillation (MED) would potentially be financially viable for Namibia given a world class solar resource at Arandis, where state utility NamPower plans a solar park close to the demand.

Including multi-effect distillation would add relatively little extra cost to that of a standalone CSP plant in Namibia, the authors of a study published at Renewable Energy in January 2018: Integrating desalination with concentrating solar thermal power: A Namibian case study.

CSP is the thermal form of solar that makes electricity by powering a conventional power block, but instead of fossil fuel, uses just sunlight.(How CSP delivers solar at night.)

The feasibility study for Namibia comes in the context of much CSP+desalination research and development by major CSP research centers globally, including MIT and the Cyprus Institute, which is currently demonstrating a prototype for Mediterranean islands, and CIEMAT and DLR in Spain, which has long led desalination research, with CIEMAT currently leading the SolarPACES Task VI: where it coordinates international researchers, and Germany’s DLR, recently summarizing the range of CSP+desalination technologies being explored.

Tip:- For extensive research on this topic, search all international SolarPACES research at this site: keyword ‘desalination’

Pros and cons for Namibia

This 100 MW CSP+MED plant would be more expensive, the study estimated, than the existing desalination plant just north of Swakopmund, which uses grid-powered reverse osmosis.

However, co-generating both electricity and water would have additional benefits over the current grid-powered reverse osmosis plant. One advantage of this proposal is that it simultaneously generates electricity, while the current plant consumes Namibia’s scarce electricity.

With thermal energy storage the study’s CSP+desalination plant would provide dispatchable solar to supply 15% of Namibia’s peak demand into the evening, giving the small sunny nation greater energy independence from its neighbors, and reducing its carbon footprint, helping it meet its 2030 70% renewable energy target.

With a small population, 2.5 million, Namibia’s peak load was around 656 MW in 2017, of which 347 MW is supplied – albeit seasonally – by local hydro power from the Ruacana Hydropower Scheme.

“In 2017, Namibia imported approximately 60% of its annual electricity from surrounding countries. Most is from South Africa’s power utility, Eskom, and that’s mostly coal,” said the research study’s co-author, Ernest Dall.

Dall received a bursary for his Masters in Mechanical Engineering at Stellenbosch in South Africa from NamPower, Namibia’s national electric utility, and is now an engineer in its Power Systems Development division.

“I luckily had the option to choose my research topic and I wanted to do something looking at future issues that do not just affect Namibia, but issues that are global, and that is basically electricity and water scarcity, which if you think about it, go hand-in-hand in desalination,” he related.

Namibia is already water stressed. The United Nations projects it will become vulnerable by 2025.

“There is a synergy between power generation and desalination of seawater,” explained Dall. “The desalination plant effectively replaces the condenser in the Rankine cycle, whilst the Rankine cycle in turn provides a ready source of low grade heat for desalination.The concept hinges on utilizing that waste heat from your CSP plant and trying to use that as a heating source.”

The profitability of co-generating both electricity and water is equivalent to that of a CSP plant only generating power.The added cost is minor, about 13%. The solar field would be oversized in relation to the power block, and both operations would be simultaneous.

“You can do both at once, generate electricity and desalinate water,” said Dall. “Because the desalination plant functions as the dry cooled condenser – the one is dependent on the other. One in fact cannot function without the other one unless there’s a redundancy added in the system.”

“Water is considered a precious commodity in Namibia with prices seen to rise in the past resent years. We experienced a drought now for a few years and I don’t believe that water prices will decline anytime soon.” CSP+desalination could be attractive in similar water-stressed nations, Dall said.

“Feasibility would depend on various boundary conditions like local water and electricity tariffs, solar resource, demand, etc,” said Dall. “Whether water is more or less expensive relative to the price of electricity. This would affect how you would optimize the CSP+desalination plant.”

The Namibian study determined that water from the CSP+thermal desalination with multi-effect desalination would cost one and a half to two times as much as the existing grid-powered reverse osmosis desalination plant on the coast, with distance from the coast playing a big part.

NamPower plans its CSP plant near Arandis, one of Namibia’s best solar resources with close to 3,000 kilowatt hours of direct normal irradiance per square meter per year.

The location benefits from being near much of the electricity demand, and existing transmission, road and rail infrastructure. The existing Trekkopje desalination plant is just north of Swakopmund. 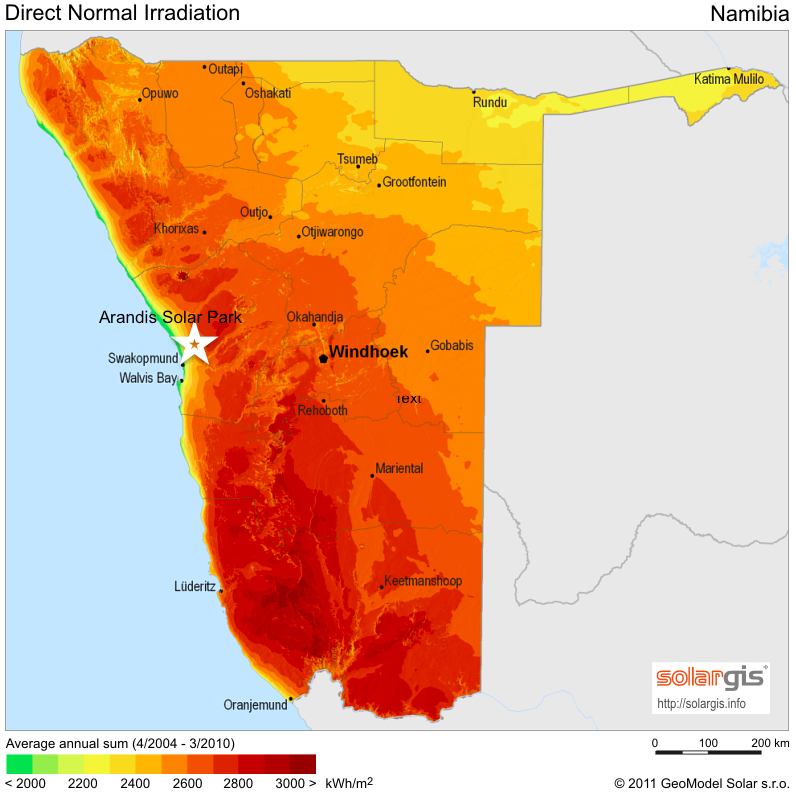 However, the Arandis site is 48 kilometers from the coast and 580 meters above sea level.

“The pumping is quite significant, because of the distance and height difference. It is 12 MW, which represents quite a lot of the electricity generated from a 100 MW CSP plant,” Dall said.

The study erred on the side of caution with very conservative estimates which resulted in a cost of CSP electricity of 13 cents per kWh, assuming a high risk finance cost of 18%.

But the study assumed that this relatively expensive electricity from the CSP plant would be used to pump the seawater up from the coast. Pumping would account for almost half the cost of desalination.

Dall suggests that instead, low cost PV could power the pumping. He sees local Namibian businesses going solar, suggesting that even at retail, PV costs less than the grid.

Electricity from PV could run the pumps at almost half the cost, with recent prices in neighboring South Africa ranging from 6 – 8 cents per kilowatt hour. (A Namibian brewery cited its 6-7 year payback for 1 MW commercial rooftop PV, even back in 2013.)

“You could oversize your pumping facility so that you could just pump during the day with PV. I think that could potentially bring the cost down but I’ve not looked into this,” he said, adding, “maybe that is something that someone else can do.” Dall’s preferred next step would be less academic, a small demonstration plant.

Energy use in pumping water can be significant in large water-stressed regions. Almost 20 percent of California’s water-related energy use is pumping it around the state. A Chilean CSP+desalination feasibility study presented at the SolarPACES Conference also contended with a solar resource far from the coast.