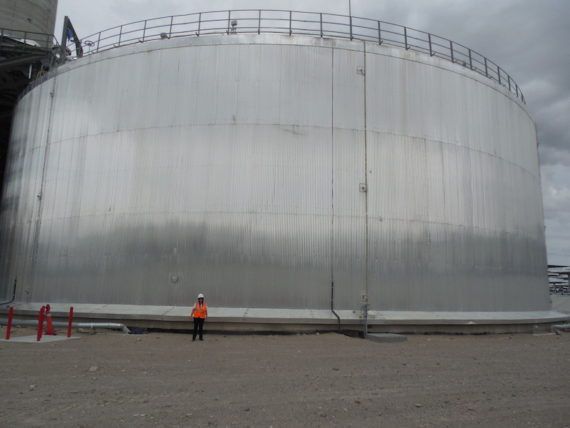 The cheapest way to store solar energy over many hours, such as the five to seven hour evening peak demand now found in more places around the world is in thermal energy storage. As solar PV adoption has risen – covering daylight hours – peak demand now typically is during the evening. Energy storage is a key to a renewable energy-powered world. As the thermal form of solar, concentrated solar power (CSP) is ideally suited to storing solar thermally.

There are several ways the various CSP technologies receive the heated fluid to store thermal energy from the sun, but once ready to store, a huge metal tank – like the one pictured above – stores the hot liquid, whether in molten salts (at about 565°C) for power tower CSP or in a heat transfer fluid (at about 400°C) for parabolic trough CSP. (See How CSP works: power tower, trough, Fresnel or dish)

Think of this energy storage tank of potential solar power as akin to the pile of coal outside an old coal plant, or to the underground cavern full of natural gas waiting to be burned up above ground in the nearby power plant.

The big difference is that in CSP this stored “fuel” from the sun is reusable. Unlike the pile of coal or cavern-full of natural gas, the heat-storing salts used in solar thermal storage can be recycled daily within a tank like this for thirty or forty years. 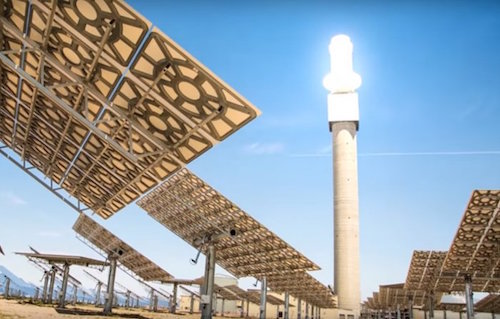 In tower CSP, a molten salt mix, like sodium nitrate and potassium nitrate, is heated by reflecting sunlight with mirrors onto a receiver atop a central tower that is encircled by a solar field of flat mirrors (heliostats). This molten salt is cycled up the tower “cold” at 260°C and is then heated by the focused sunlight aimed at the receiver from the encircling solar field. Once heated, this now 565°C molten salt flows down the tower where it can either be used right away in the power block to generate electricity or be stored thermally in the hot tank for use later. 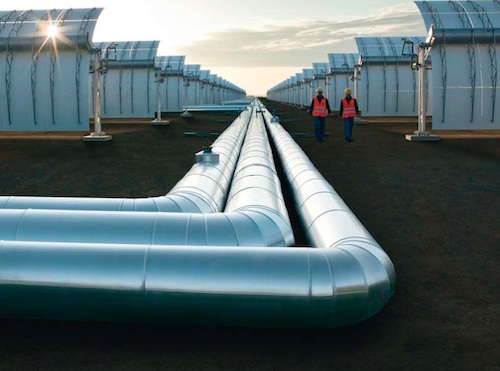 In a parabolic trough type of CSP plant, the  heat transfer fluid (HTF) – which is usually an oil – is heated in pipes throughout the solar field by reflecting focused sunlight on a narrow pipe that runs the length of its reflecting trough-shaped mirrors (heliostats). This hot oil then transfers solar-heat along bigger pipes to the power block where it can either be used straight away or held in the holding tank storing thermal energy until it is needed.

How the energy storage is used

In both CSP technologies – power tower and parabolic trough – when the thermal energy in the molten salt or the HTF is ready to be used, it is sent to a heat exchanger. There its heat is extracted and used to boil water to make steam to run a steam turbine in a power block, like the earlier power plants that use up a fuel, like natural gas, coal, or nuclear. Like the older thermal plants, CSP generates electricity by rotating giant machinery.

With its heat extracted, the now “cooler” molten salt is stored in a second tank ready to be sent up the tower to be heated again by the sunlight reflected onto the receiver.

Similarly, in trough CSP, the hot oil, once its heat has been extracted, is sent back out into the solar field to retrieve the next round of heat and to bring it back to the power block to be used again.

Molten salts lose only about 1 degree of heat a day, so it is possible to store – and top up – this thermal energy for months. Practically speaking, it is more profitable to use the stored energy daily; to get paid for the daily and nightly deliveries of electricity. But it is possible to size thermal solar energy storage capacity relative to the solar field that harvests the sunlight, so that it can be stored for months.

Molten salt thermal energy storage can be heated and cooled daily for at least 30 years. At that point, the tanks might need corrosion repair, so the molten salt would be cooled off – a process that takes months – then emptied and then returned to the tanks to supply another 30 or more years.