Overview of MIT’s proposed thermal energy storage battery, showing the hot and the cold tanks for the molten silicon, and the containers for the charging and the discharging units IMAGE@Caleb Amy

The MIT team estimates their thermal “battery” designed for long duration – 100 hours or more – would be half the cost of today’s cheapest grid-scale energy storage; pumped hydro.

A very intriguing idea for long-duration gigawatt-scale grid thermal energy storage proposes to store renewable electricity from the grid by charging a “battery” of molten silicon – and would then use multi-junction photovoltaic (MPV) cells to convert its 2,400°C heat back to electricity.

Because thermal storage, used in Concentrated Solar Power (CSP) is 10 to 100 times cheaper than storing electricity chemically in batteries, thermal batteries are now being proposed by established CSP firms like Abengoa, researchers at NREL and startups like TEXEL and Azelio as well as the Bill Gates-funded Malta. Converting grid electricity to heat in thermal storage is essentially 100% efficient.

What makes the MIT innovation different is how the thermal energy gets converted back to electricity. Traditional turbines for turning heat back to electricity are still relatively inefficient. But unlike mechanical heat engines like turbines, PV is still getting cheaper.

Asegun Henry who directs the Atomistic Simulation & Energy (ASE) Research Group at MIT, and Caleb Amy, who worked on this technology for his PhD there, proposed Thermal Energy Grid Storage using Multi-Junction Photovoltaics to solve the longterm grid storage problem, as detailed in their paper published in Energy & Environmental Science and in a presentation at the SolarPACES 2020Conference.

But how could any photovoltaic cells turn heat back to electricity? All PV requires sunlight to make electricity – so how would it work shut away from the sun, enclosed inside a box of thermal energy storage?

Henry explained that for this novel thermal battery, multi-junction photovoltaics (MPV) would actually be the most readily available option for the discharging step.

“With multi-junction photovoltaics we actually have a much lower barrier to deployment,” he said. “There are companies that already make cells similar to this, or can adapt their manufacturing equipment to make these kinds of cells. And the cost can actually be considerably lower than that of a turbine so we can get down to like $0.10 a watt rather than $1 a watt.”

“So the temperature was really the result of choosing the cheapest materials for storing energy, and then the PV was because we think it will be the cheapest heat engine for the cheapest conversion back to electricity,” added Amy.

“The cells are actually pretty expensive on a per square meter basis compared to solar panels. But the heat flux hitting them is much higher than the heat flux from the sun because they’re much closer to the heat source. So on a dollar per watt basis they are much cheaper.”

A turbine for these temperatures doesn’t exist

“This would have had to be an external combustion turbine otherwise, and have a heat exchanger and other components that don’t exist yet,” Henry noted.

The temperatures are much higher than in today’s thermal energy storage: Commercially proven molten salt storage in CSP plants store energy for use at up to 565°C, and at the pilot stage at up to 1,500°C in particles for Brayton cycles. The very high temperature solar thermal startups like Synhelion (which uses 1500°C make solar fuels), HelioHeat and Heliogen which use up to 1000°C for industrial heat or hydrogen production don’t need a turbine because they all produce heat, not electricity. But no mechanical turbine exists for a molten silicon alloy heated up to almost 2,400°C.

“Since no one’s ever made it there’s a very large barrier to deploying a new turbine of this nature,” said Henry. “You’re talking about a hundred million dollar-plus R&D effort. You’ve got to get buy-in from GE or Siemens basically to do this for you. In an academic lab, we’re not capable of developing a new commercial turbine.”

This also creates challenges in containing and pumping the metal, he said: “Most metals will dissolve other metals. You wouldn’t want to try and make a pipe for sugar water out of sugar.” To solve the problem that hot metals would simply dissolve metal containers, the MIT team proposes making all the piping, all the containments, from carbon.

To pump the molten silicon, a mechanical pump centered within each of the two gigantic vats about 40 m tall moves the liquid throughout the system. IMAGE@Caleb Amy

“This is the technological step that we made that preceded this,” said Henry. At this scale, you would need to able to pump a very large volume of very hot silicon through the enormous network of carbon graphite pipes. Pumping was the breakthrough that enabled the technology. The team hold a Guinness Book record for pumping silicon at 1,400°C, and recently surpassed it by pumping molten silicon at about 2,000°C.

In their 2017 paper published at Nature: Pumping liquid metal at high temperatures up to 1,673 kelvin they showed actual moving parts glowing white hot and not shattering. The team tested pumping liquid tin at 1,400°C using a mechanical pump, proving that the materials can work under these conditions. The seals to join two graphite pipes so liquid metal does not leak are crucial.

“How we do that is we can actually make all ceramic or all graphite pumps and valves and piping networks,” Henry said. “The key innovation here is in the seals. Graphite is actually not a very expensive material to work with. It’s easy to machine. We do it in my lab all the time. The cost is not much more expensive than steel and you can make it make a whole graphite system very easily.”

From the return tank, after its heat is extracted, silicon is pumped through a central big box of electric heating elements to bring electricity in from the grid to heat the liquid, which is then pumped into the hot tank, ready to be pumped through the box of pipes where solar cells discharge the electricity to the grid, and return the silicon to the colder tank to start again. 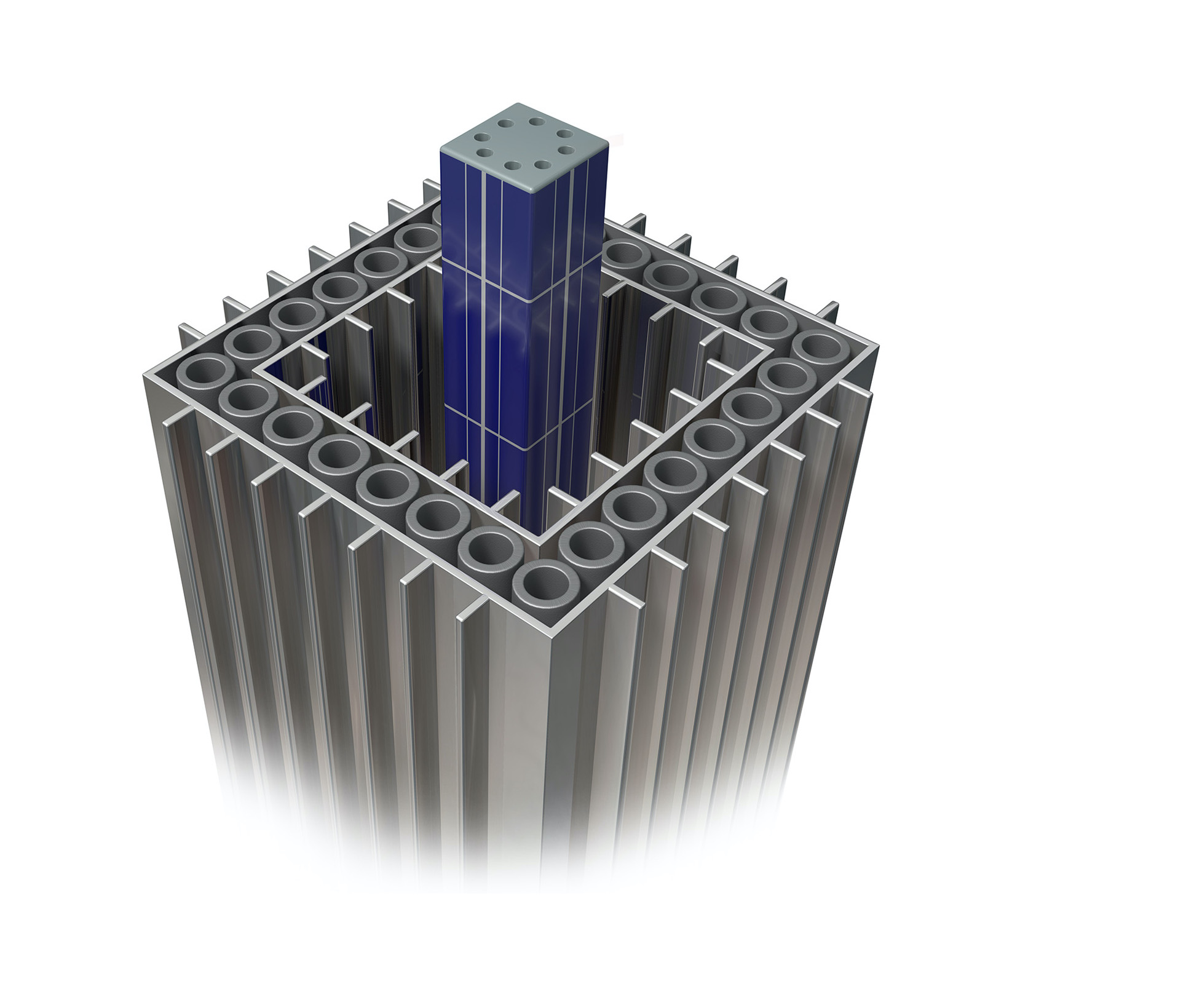 One of the multiple MPV units  IMAGE@Caleb Amy

In each MPV unit, a central four-sided “tower” of MPV is surrounded by a square of white-hot walls radiating light, because molten silicon at 2,400°C is being continuously pumped through the pipes heating tungsten walls facing into the central tower. Each MPV unit can produce half a MW of electricity, and these would be duplicated multiple times inside a large container about 10 meters tall, for massive storage at grid scale.

Some of the radiation cannot be converted efficiently, so the wavelengths of infrared light that are below the band gap, pass through the multi-junction cell, and are reflected off the mirror behind it, after which they bounce back to the courtyard walls, rejecting heat. In addition they are also water cooled.

This solar heat engine would allow instantaneous response to grid needs, because each unit inside the thermal storage could be turned on or off instantaneously.

“These MPV cells could be actuated in and out of the light,” said Henry. “They could be mounted to actuators so you can dip them into the light source to turn the system on to get output, or retract them to very quickly reduce the output. This is why this is very attractive – for grid scale storage, this allows you to have gigawatt scale ramping on the order of seconds, which currently doesn’t exist.”

As a result, this MIT concept would have a fast response advantage over today’s peaking turbines which take 20 minutes or more to ramp from zero to full load. Henry added that battery cost-reduction has inherent limits because chemicals require high purity to react, while thermal energy storage doesn’t. “This is because when you store energy thermally, at the atomic level, you are actually storing it as kinetic energy,” he explained. “When you heat something, the atoms move faster. And kinetic energy is very tolerant of impurities. So you can use much cheaper materials for thermal energy storage.”

He suspects batteries are unlikely to ever get below $50 per kWh for this reason. But to get to 100% renewables, energy storage costs must get down to under $10 per kWh.

“The reason we’re designing this is that there isn’t a cheap form of energy storage for long durations,” Amy noted. “Most of the economics we’ve looked at are for just like ten hours, right? We’re looking at up to a hundred hours. We think it looks pretty good in that regime. Definitely it has a cheaper heat engine cost because everyone else is using a mechanical turbine.”

“This is why this is very attractive – for grid scale storage, this allows you to have gigawatt scale ramping on the order of seconds, which currently doesn’t exist'” IMAGE@Caleb Amy