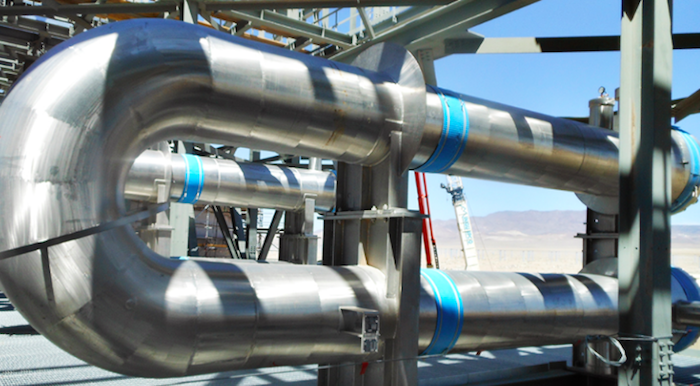 Concentrated Solar Power (CSP) is seen as competing with solar PV, but actually it competes with natural gas. [Part of the steam system in a CSP project in Nevada: image: Brahma Group]

Concentrated Solar Power (CSP) is a dispatchable form of solar

PV is not dispatchable. PV only runs when the sun shines. CSP can be dispatched on demand, more like turning on a switch to get solar. So CSP doesn’t compete with PV. Here’s how that works:

Although CSP makes solar electricity by harvesting sunlight like PV, it operates more like a conventional power plant. Once the sunlight is collected as heat, (see How the various solar thermal technologies do that) the “back end” – the power block – works the same as any other thermal energy power station.

Coal, natural gas, and nuclear power plants all operate on thermal energy, but must burn a fuel to make electricity.

CSP also runs on thermal energy. But instead of having to burn a fuel to generate the next few hours of electricity, CSP can harvest a pretty much endless supply of sunlight to store and deliver solar thermal energy. In contrast with a finite fuel like gas or coal or uranium that must be dug up from below the earth to use up by burning it to make electricity – this sunlight will be available above the earth for centuries.

Because of its ability to store solar energy thermally, CSP can deliver power on demand (so it’s dispatchable), and it can be made available whenever it’s wanted. In other words, CSP is solar power that can be switched on when needed — in the evening, before sunrise, or at whatever time the regional grid needs power.

A solar thermal power plant can respond to new demand within the same day. The speed of start-up is limited only by the time it takes to start the turbines, just as it does with other thermal power stations, about 20 minutes.

This power block technology and the ability to store its solar energy thermally makes CSP a disruptive renewable technology. It can make the energy grid cleaner because it can actively replace fossil energy. Together with the other renewables, CSP plays a role in a cleaner new grid. So CSP does not compete with PV. It competes with natural gas.

Here’s why CSP is a better choice for dispatchable power than natural gas.

Like CSP, natural gas is dispatchable. But it’s also:

Burning natural gas is a climate risk, just like burning other fossil fuels like coal or oil. Though natural gas emits lower emissions during power generation than coal, methane leaks during drilling and transporting more than make up the difference. Natural gas is predominantly methane.

While the impact of CO2 destabilizes climate for thousands of years, making it the greater danger overall, methane is a 20-times more potent greenhouse gas than CO2 in the short term, with immediate effects that will raise temperatures for the next several decades.

Natural gas is also an immediate physical danger. It is a gas that can literally kill people and animals. Workers must use protective safety gear to produce it. The chemicals used in fracking are suspected of potentially polluting the water table under populated areas.

Despite these dangers, natural gas must often be stored underground near densely populated areas, ready to burn in power stations, because populated areas are where the demand is. Leaks are unavoidable, and are costly.

Natural gas prices are unpredictable. Over the long run, prices will rise as resources run dry. Typically, a utility passes through the extra cost to customers when natural gas fuel costs rise.

The natural gas industry faces worker shortages in the future, due to its unpopularity with millennials. As it becomes clearer that fossil fuels are an existential danger, there is a slowdown in interest by younger workers. 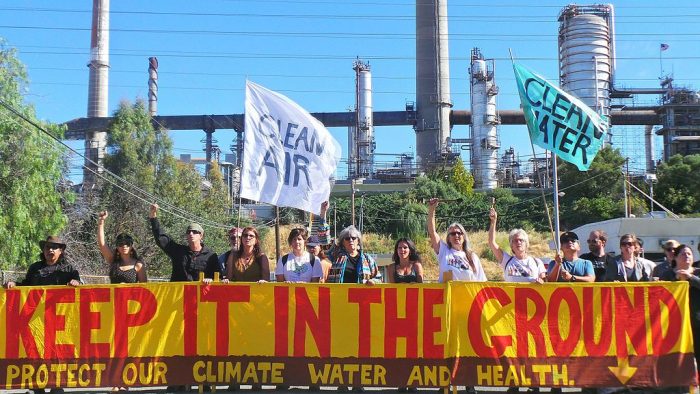