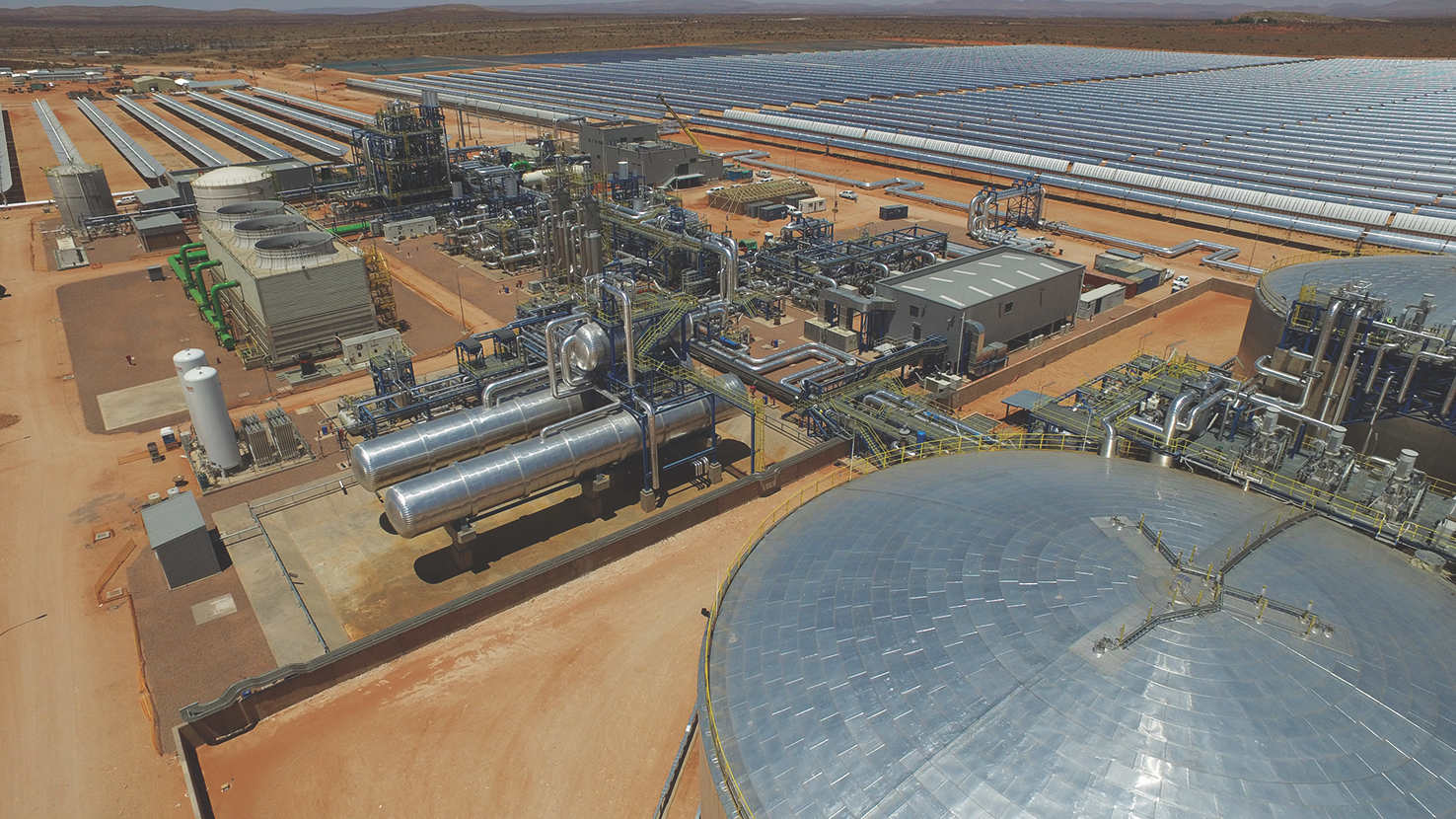 SolarPACES spoke with Nandu Bhula who has been with the team responsible for the success of ACWA Power’s 50 MW Bokpoort trough Concentrated Solar Power (CSP) plant in South Africa since the start, first as CEO while the project was being built, and currently as Chairman of the Board.

Commissioned in March of 2016, Bokpoort is already meeting expected generation, Bhula told SolarPACES in the call. The 50 MW plant has 9.3 hours of storage, and its average annual production is around 230 GWh.

“The plant is really proving itself through its reliable performance,” he said.

“We’re producing really strong load factors even during the daily morning and evening peaks. The evening peak in South Africa lasts till around 10pm. At that point we slightly turn down the unit to around 35 MW and continue delivering throughout the night, and around 6pm we ramp it back up to 50 MW again. Right now, we have had a good performance run since June and the prospects for November and December are looking amazing.”

The night we spoke, Bokpoort had already had four months of continuous good performance since a planned outage in June 2020, and Bhula noted that it appeared to be on the way to break another of its string of records for round-the-clock generation.

Typically, it takes 2-3 years for a plant to reach full reliable production, and incremental targets are usually set to gradually reach 100% modeled energy output. During its first three years, Bokpoort CSP was able to achieve targets within a range of 2 – 4% of each of its annual goals despite the construction related “teething” defects that are common in all thermal energy plants.

“It is generally understood that all thermal plants tend to have a longer commissioning ramp-up period; coal power stations and gas turbine stations do too, not just CSP,” he noted.

“Generally, if a defect is spotted, the operations teams need to implement a planned outage, factoring in down time for cooling and execution of the work. This requires programming and engineering overview, adding to the operational challenge. Once the plant is running at full load, further fine tuning in the thermal circuit can also be done to improve on the plant overall efficiency. Over the past 4 years, we have focused on the continuous improvement of our operations and I think we are in a very sustainable, good performance period right now.”

Bhula believes that the trend will be for CSP plants with large storage components to continue running overnight at reduced load like SENER’s Gemasolar in Spain, the first CSP tower plant with significant storage. It can be operated round-the-clock over periods of weeks due to its 15 hours of storage. 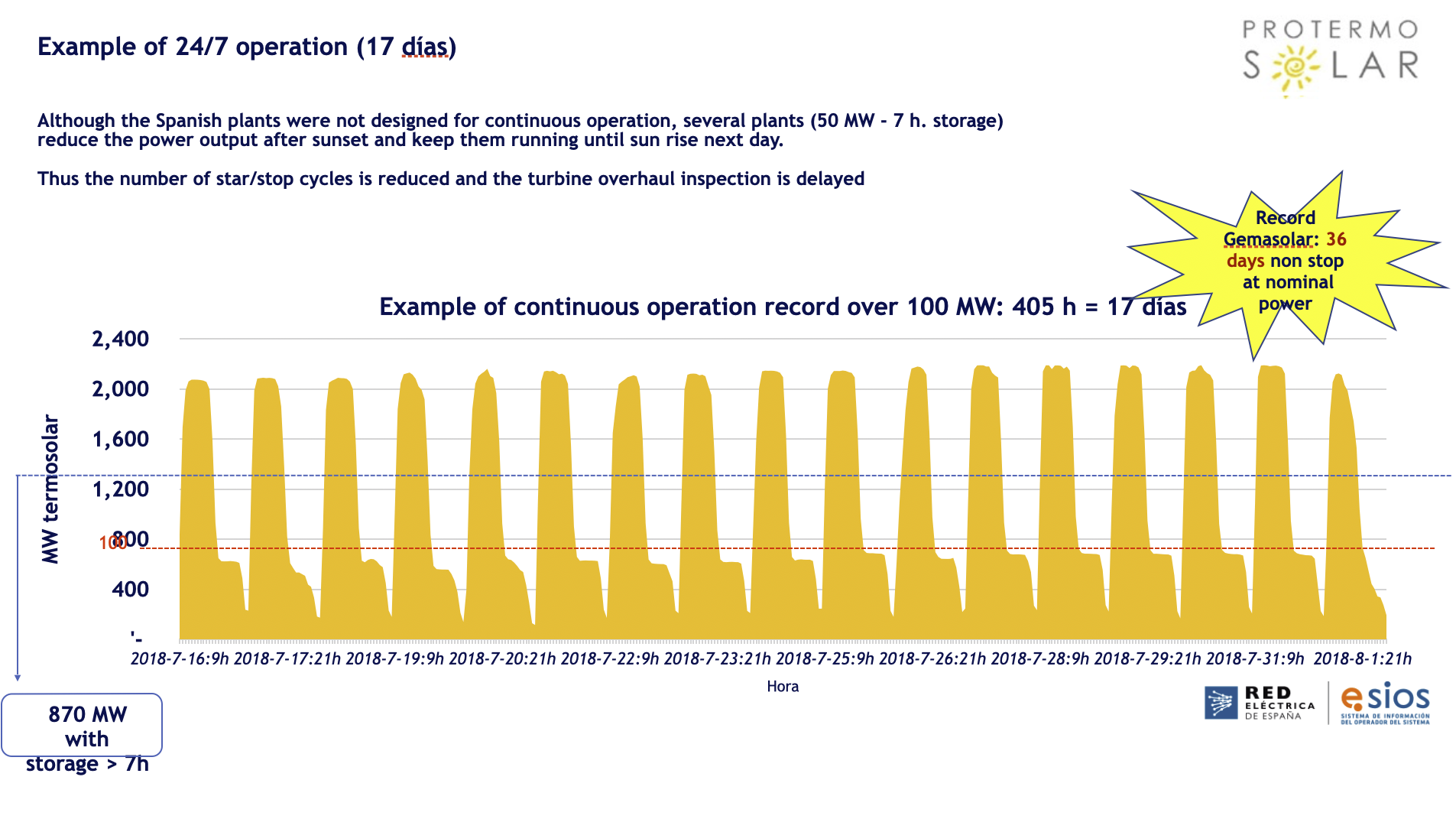 With 15 hours of thermal energy storage, the graph shows the reliable performance of Gemasolar during a 17-day streak of round-the-clock generation IMAGE @Protermosolar

Bhula said that round-the-clock operation helps all kinds of thermal plants, not just CSP. By continuing to operate at reduced power all night, wear and tear due to startup and shutdown is reduced.

“Our aim is to try to reduce the number of stops and starts in the year by achieving 24/7 operation at least 30 percent of the time. This is possible during our spring and summer months” he said.

“When we can do that, we can extend our maintenance cycles, saving the equivalent in operating hours. In addition, given that CSP’s are thermal plants with synchronous machines, we actually contribute a lot more than energy to the grid, we also support the grid from a transmission benefits and ancillary services perspective as well.”

Just-retired Protermosolar head Luis Crespo has been checking in with Spain’s CSP plant owners regularly since their initiation, now running for seven years. Spain’s 2.3 GW of CSP plants installed by 2013 has also proven to be reliable, said Crespo, who was recently awarded the Lifetime Achievement Award at SolarPACES 2020.

“They are performing kind of like Swiss clocks. The owners here are very satisfied how the plants are performing,” he noted on a recent Skype call. 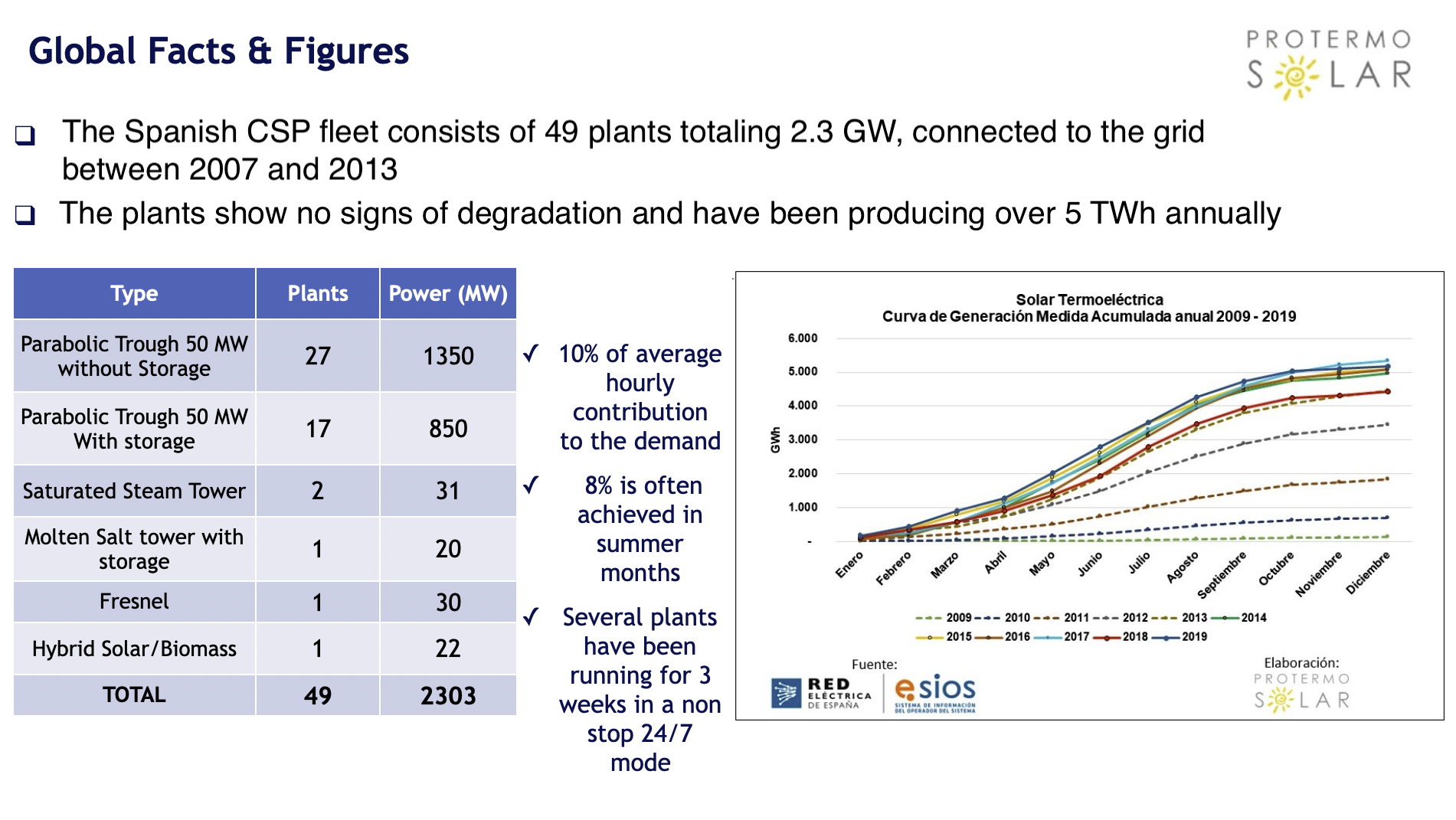 CSP is producing reliably on plan in Spain IMAGE@Protermosolar

About a third of Spain’s CSP includes storage, which boosts the operating hours of the total fleet, because storage adds hours of potential operation after nightfall and before day break.

Crespo believes that weekends already offer a glimpse of what CSP’s contribution might look like in Spain’s future when there is a much higher percentage of renewables planned, including 5 GW of CSP.

“On weekends, CSP has been reaching contribution peaks close to 10% of demand,” he explained.

“A lot of factories are closed on weekends and so overall demand is much lower. Spain has merit order; there is a sequence for generation. Renewables go first and so gas and coal shut down when there’s lower demand. That resulting 10% of load is sort of an example of what CSP could look like in a future with higher renewable percentages.”