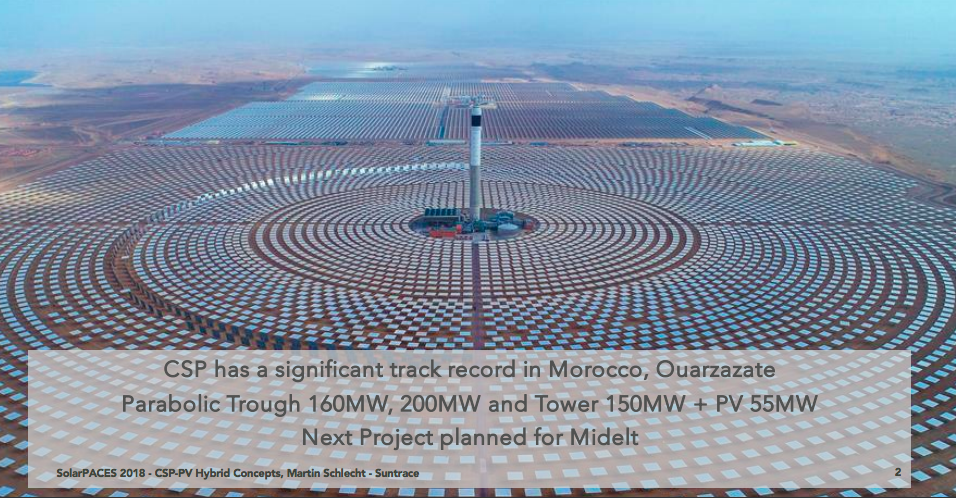 Online since December, the Noor III plant is showing the best performance yet for CSP tower with storage. (Image credit: MASEN)

Data from the first few months of operation shows Noor III is exceeding performance targets on total output, ramping rates, as well as the integration of the thermal energy storage and steam generation systems, Lara said.

“We are proud to say that EA is doing its best effort to manage the integration between the “solar island” and the rest of the plant, which was one of the main factors of the failure at Crescent Dunes,” Lara said.

Another key area which will be closely monitored is the ability of the steam turbine to withstand “thermal stresses associated with the temperature gradients during the frequent ramp-ups and cooling,” Lara noted.

Germany’s Siemens is to supply four steam turbine generators and auxiliary equipment for the parabolic trough and tower plants.

“Given the nature of CSP operations, it is essential that the steam turbines used in these plants be highly efficient and offer rapid start-up times,” Siemens said in a statement.

Strong early performance data from Noor III on output, generation flexibility and storage integration should reduce reliability concerns for CSP tower with storage and lower the cost of capital for future projects, the experts said.

Limited deployment of tower plants has meant individual project performance has had a significant impact on investor confidence.

Power output at Crescent Dunes was lower than planned during the first years of operations and a year after start-up the plant was shut down for eight months due to a leak in the molten salt storage system.

ACWA Power and partners recently added a record 600 MW parabolic trough capacity to the 100 MW Noor Energy 1 CSP tower storage project in Dubai. The project was later expanded to include 250 MW of PV.

“The moment trough was brought in as a larger part of the overall hybrid, it brought about a completely different level of comfort,” he said.

The weighted average cost of capital (WACC) for parabolic trough CSP plants is estimated at around 45%-50% of levelized cost of electricity (LCOE), depending on the market.

Financing costs for CSP tower plants have remained at a premium to parabolic trough projects, due to lower installed capacity and high-profile performance issues on early projects.

Until recently, parabolic trough technology has dominated the CSP market with over 4 GW of installed capacity, compared with 1 GW of tower capacity.

Demand for tower capacity is on the rise as developers leverage the greater storage efficiency of tower designs. There is currently around 610 MW of CSP tower capacity under construction in Chile, China and UAE, data from the New Energy Update CSP Global Tracker shows.

For tower plants, WACC might represent around 3% higher share of costs, but this is soon set to change, Lara told New Energy Update.

New projects in China will provide further insights on the performance of CSP tower with storage plants.

Co-funded by the U.S. Department of Energy (DOE), the World Bank and the SolarPACES CSP initiative, the researchers will build a database of challenges and solutions that lenders must be aware of and issue recommendations for areas of further improvement.

The study will include data from U.S. and Spain, which together host around 4 GW of capacity, as well as more recent growth markets such as Middle East and North Africa (MENA) and South Africa.

“I think that Noor III has been the tipping point whereby investors going forward will finance tower projects against the same risk benchmark as parabolic trough projects,” he said.

The WACC of tower with storage projects will likely drop to around 48%-51% depending on the country and market conditions, Lara said.

Financing costs could even fall below parabolic trough for some projects, Lara said.

The African development bank (AfDB) has approved a senior loan of 3 billion rand ($212 million) for the $798-million project and ACWA Power has signed a 20-year PPA at a price of $124/MWh.