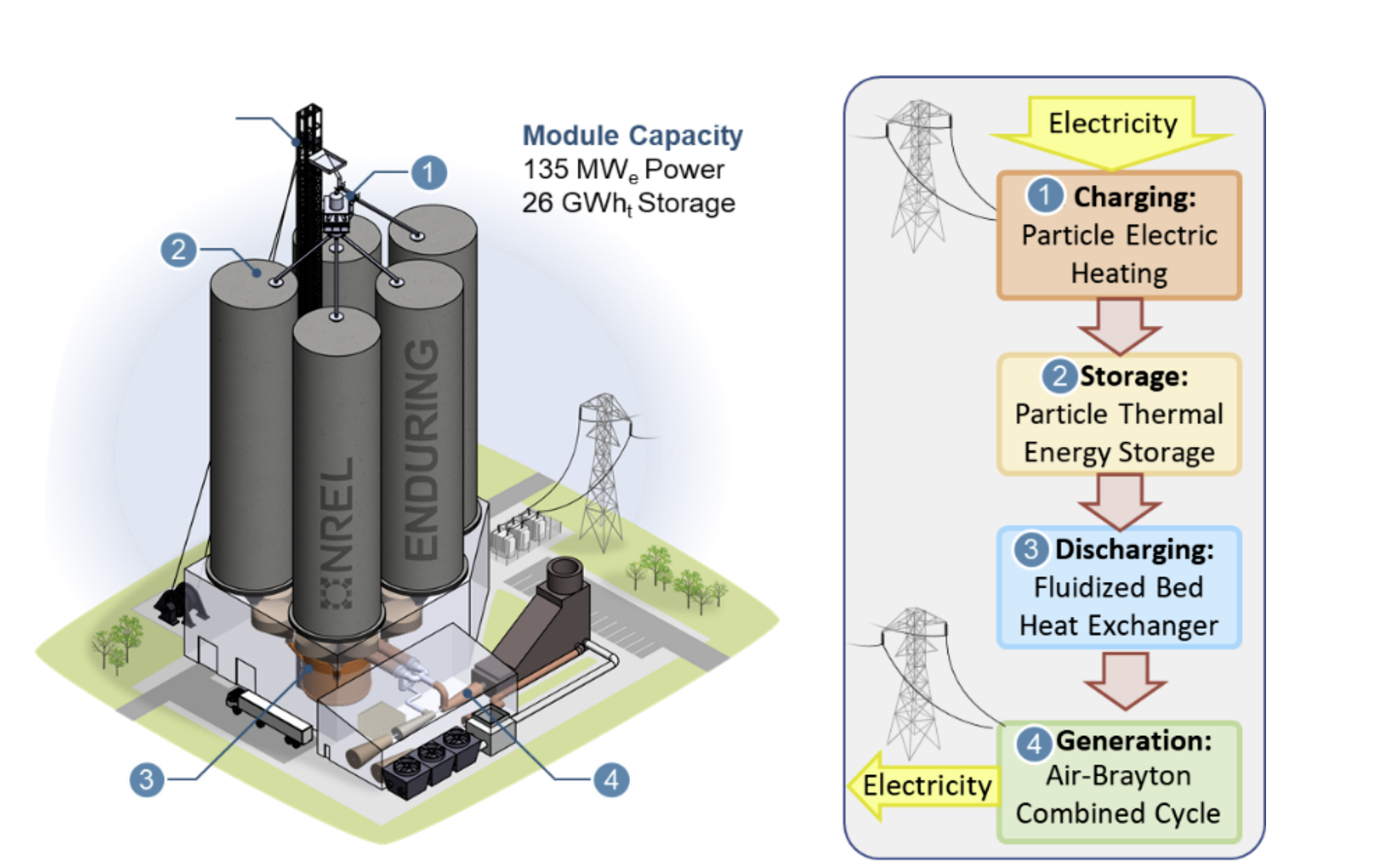 There aren’t many novel clean energy technologies that could also directly remove fossil energy plants. The US National Renewable Energy Laboratory (NREL) has created one.

Long duration storage at grid scale is crucial to meeting climate targets. Solar PV and wind have the momentum to be a big part of the new energy economy, but only if we can add enough energy storage to make these intermittent sources dispatchable on demand at lower cost and over longer durations and for many more cycles than batteries.

The world needs a long duration energy storage technology as cheap as pumped hydro, but without the environmental and location challenges.

NREL’s ENDURING project set out to demonstrate each of the novel components needed to store thermal energy for up to four days, cycle for 30 years or more, and cost no more than 2.5 cents per kWh. Thermal energy storage is already cheaper than batteries, only if amortized within a CSP plant. To keep costs low for standalone thermal storage, NREL designed a system repurposing existing turbines and grain silo technology.

The novel technology met the challenge of demonstrating that it can store and release power from a 26,000 MWh particle-based thermal energy storage system via a 130 MW electric generation system for up to four days; 100 hours. The system is scalable to supply power for local communities or regional utility grids.

Thermal energy storage is a fully tested technology in commercial CSP plants, but using a liquid; molten salts. However, increasingly, particle storage is being researched as a more efficient storage medium than molten salts which have a working range between 290°C and 560°C – due to the much higher temperature differential of 300°C and 1000°C in particles of sand.

“We’ve studied particle-based thermal energy storage since 2011, initially for concentrating solar power,” said Zhiwen Ma, the NREL project lead. “Now it has been extended – to standalone particle thermal energy storage and industrial process heat, and heating and cooling in buildings – for even broader decarbonization, by replacing coal and natural gas.

Substituting a free gas; air, instead of natural gas in power plants

The team partnered with GE to integrate the storage with a gas turbine power cycle.“The point of it was to try to use commercial systems as much as possible in terms of power cycles since they have a hundred years of development there’s a lot of expertise already there,” said Colorado School of Mines Ph.D. student and NREL collaborator Jeffrey Gifford.

To charge this thermal battery, surplus power from the grid would heat sand in silos. The sand particles would heat air – a gas which is predominantly nitrogen – to drive a commercially available gas turbine. Air is obviously a much more environmentally friendly gas than natural gas and when heated by the stored sand particles and delivered at high press it can drive the same hot gas turbine used in gas power plants today with no modifications. The air would be heated by silica sand particles from the Midwest stored in 90 meter tall silos – about the height of today’s industrial silos.

“We wanted to generate a thermal energy storage system that could integrate with what already exists,” Giffords said. “Just like how we can turn on natural gas power plants today when we need them – that’s the role of our long duration energy storage system – to be able to shape wind and solar for them to be dispatchable.”

The particles of cheap silica sand are stored in four 90 meter tall silos which are insulated to hold the heat. Power lines from the grid connect to heaters in the top of the silo where the sand is cascaded over electrically heated rods raising its temperature to 1,200°C, and piling it up; filling the silo.

At the bottom, the hot sand falls into a heat exchanger through a pair of lock hoppers, where the hot sand heats air which is then funneled up and off to the power block where it runs the turbine, producing electricity. To prevent the particles from contaminating the air, a centrifugal force like in a Dyson vacuum separates the particles from the air so the heated air is cleaned up before flowing into the turbine.

The now cooled sand at 300°C at the bottom of the silo is then lifted back up to the top in an insulated skip hoist designed by an industry partner’s subsidiary, running up the side of the silo. This parasitic energy use would consume only between 1-4 MW of electricity in a 100-MW storage system.

When in charging or discharging mode, the four silos would empty and replenish consecutively. The stored thermal energy can be discharged depending on grid needs. They might simply hold the heated particles for days until needed. The heat loss is negligible, about one percent per day.

Where the research project is now

“The ENDURING project is wrapping up this spring. These first three years, we tested all the components to make sure that the concept can work. And now we’re looking and actively pursuing getting it out of lab scale and into pilot scale,” said Gifford, whose specific role has been modeling each of these components to evaluate how it would perform at full scale; 100 megawatts or more.

“Our project is pioneering an integrated system using particles and air turbines for electricity storage,” he noted. “We have done a lot of fundamental testing, building a bunch of different test stations to do lab scale tests of all of the novelty components of the system like the new resistive heater or storage silo or the heat exchanger.”

To de-risk the novel components, they demonstrated a fluidized bed heat exchanger and integration with the power island using turbo machinery. The team performed 100 cycles between 1,200°C and down to 300°C. A 500-hour heat test for particle durability in a furnace at 1,200°C found no degradation.

DOE funding so far has enabled lab scale development by the team to a Technology Readiness Level (TRL) of 5. The next step is to build a pilot scale test at 2 to 5 MW. Babcock & Wilcox has an exclusive intellectual property option agreement to license the technology.  Xcel Energy has shown interest, but like other utilities, they need to see it demonstrated at a pilot scale first, which the NREL team hopes to get funded over the next few years.

“Next we hope to get funding for full-scale component tests, and we have applied to the ARPA-E program; SCALEUP  to move to a TRL of 7. If we are selected, this could provide enough funding for pre-commercialization, when private funding can catch up,” Ma explained. The funding in SCALEUP is designed to get promising novel energy technologies to commercial scale. ARPA-E will announce awardees in August 2022.

The beauty of discharging stored clean energy to the grid using gas turbines in a combined cycle power plant running on heated air instead of natural gas is that this creates an attractive off-ramp for power plants to avoid becoming stranded assets and to instead play a key role in enabling a truly clean energy future.