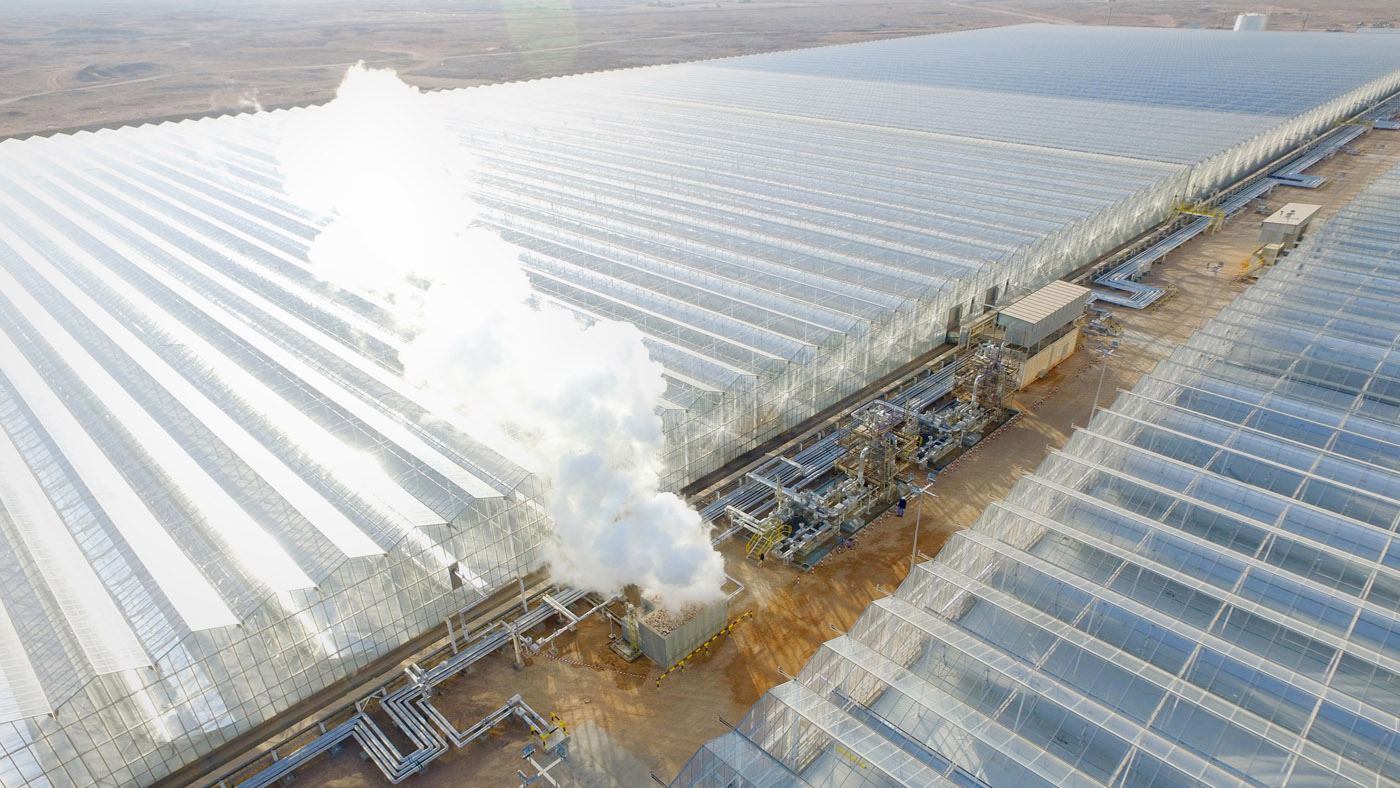 Saudi Arabia has signed an MOU with the California-based firm GlassPoint to build the world’s biggest solar thermal steam producing plant there. The facility will generate steam directly to make aluminum.  Aluminum is used in such products as cars, computers, and cell phones.
In many places, industry burns coal or natural gas for heat to create steam. But the global economy is decarbonizing, requiring renewable energy like solar thermal to generate steam or hot air directly in manufacturing such things as aluminum, cement, and copper.

The Saudi Arabian Mining Company will buy industrial solar-generated steam from GlassPoint. A bauxite refinery will use it to produce aluminum. When complete, the 1,500-megawatt facility will help the Saudi mining enterprise achieve its sustainability goals by reducing carbon emissions by more than 600,000 tons annually, or 4% of its overall carbon footprint. GlassPoint, which has not announced a completion date, says that the solar-generated steam will replace half of the fossil-fired steam that the refinery now uses. Building such a facility takes months — not years.

Selling solar steam as a service

“Imagine you are an industrial user, and you have to decarbonize: do you spend hundreds of millions of dollars on new technology? Or do you allocate scarce capital to your core business? Today, they buy gas to produce steam. But now they can buy solar-powered steam,” says Rod MacGregor, the founder and chief executive of GlassPoint. He notes that GlassPoint owns the solar fields and sells the output to industrial users under 20-30 year supply agreements. GlassPoint is not sharing the total cost.

He tells this writer that the manufacturing process is energy-intensive — whether it is to produce metals, chemicals, or paper. Industry uses enormous amounts of steam or heat. But government regulators, shareholders, and customers are putting pressure on those same manufacturers to limit their carbon footprint.

Consider that 74% of the energy used in industry is in the form of steam or heat. While companies could potentially use solar panels to create electricity and then use that electricity to produce steam, it would lose too much heat. Solar-generated steam is far more efficient. GlassPoint uses mirrors to concentrate solar energy on pipes filled with water to create steam. This steam or heat can be used for a variety of industrial processes.

While the bauxite mine is typically not near a refinery, the solar-powered steam plant has to be within 10 kilometers. According to MacGregor, when the steam is transmitted to the refinery, only 1% of it is lost. And 55% of the reflected sunlight is turned into steam. (Solar panels convert only 12% of the sunlight they capture into electricity for comparison purposes.) The amount of land required to build this specific solar-generated steam plant is about 7 square kilometers. A solar photovoltaic facility would require about 6-times more land, he said.

“Solar steam is more expensive than gas,” says MacGregor. “But it is the cheapest way of getting emissions-free heat.” Industries must conform to the demands of the global community and their shareholders and customers. For example, the European Union taxes companies based on the CO2 content of the products they export.

A short primer on the process to produce aluminum: bauxite ore is mined before it is dissolved in sodium hydroxide, or lye, at a high temperature and pressure. After that, the bauxite ores are separated from alumina. It is then turned into aluminum using a smelting process. The transition from bauxite to alumina is energy-intensive and results in a lot of emissions. If solar-created steam can replace gas-fired steam, that will cut industrial pollution.

Most countries have bauxite deposits, but the largest ones are in the tropics. Australia is a leading producer. Brazil, China, India, and Indonesia are as well. In the United States, it is found in the southern states, although this country is not a significant producer of that sedimentary rock.

GlassPoint first installed a solar-generated steam unit in California in 2011. It then put one in Amal, Oman, in 2012 — a 7-megawatt system. That project led to a separate contract to generate 2,000 tons of steam per day-system producing peak power of more than 330 megawatts. The facility, adjacent to the one in Amal, became operational in 2018 and continues to operate daily.

Last year, the Saudi government unveiled the first wave of what will become at least 60 green initiatives — a $186 billion investment. Among the Kingdom’s goals are to increase its renewable generation and energy efficiency programs. It wants to reach net-zero by 2060.

“This significant development will dramatically reduce our carbon footprint and bring us closer to our mandate of carbon neutrality by 2050. As the world moves towards green aluminum, we intend to help lead the way,” says Robert Wilt, chief executive of the Saudi Arabian Mining Company. Green aluminum has the potential to command a premium, although the company has not disclosed its prices.

The project could pay off not just for Saudi Arabia but also for industries worldwide. Indeed, manufacturing is energy-intensive — a process that now requires steam or heat generated from fossil fuels. But decarbonization efforts are forcing companies to rethink their industrial strategies. That could propel solar-powered steam forward, taking a big bite out of carbon emissions.