Much of the research covered at SolarPACES in concentrated solar power (CSP) is advanced by international post-docs and professors, but as the need for climate solutions advances, it is drawing the attention of younger researchers with STEM backgrounds in mathematics, physics and chemistry.

During her BA in Germany, Isabell Reisch chose to create an algorithm to solve a little-researched problem in tower CSP; determining the optimal preheating strategy to the molten salts heat transfer fluid “freezing” at 240 °C.

Even as a high school student she had been excited about working in solar energy, and following her classical Abitur in physics, chemistry and mathematics, she decided to study mechanical engineering with a focus on energy technologies. As part of her bachelor’s thesis, she had the opportunity to develop a solution for solar preheating at the Institute for Solar Research at DLR.

“The topic of solar preheating is very rare in the literature,” Reisch commented. “The most common is from Vant-Hull. He describes a preheat algorithm that describes the allowable flux density as a function of the receiver temperature.” 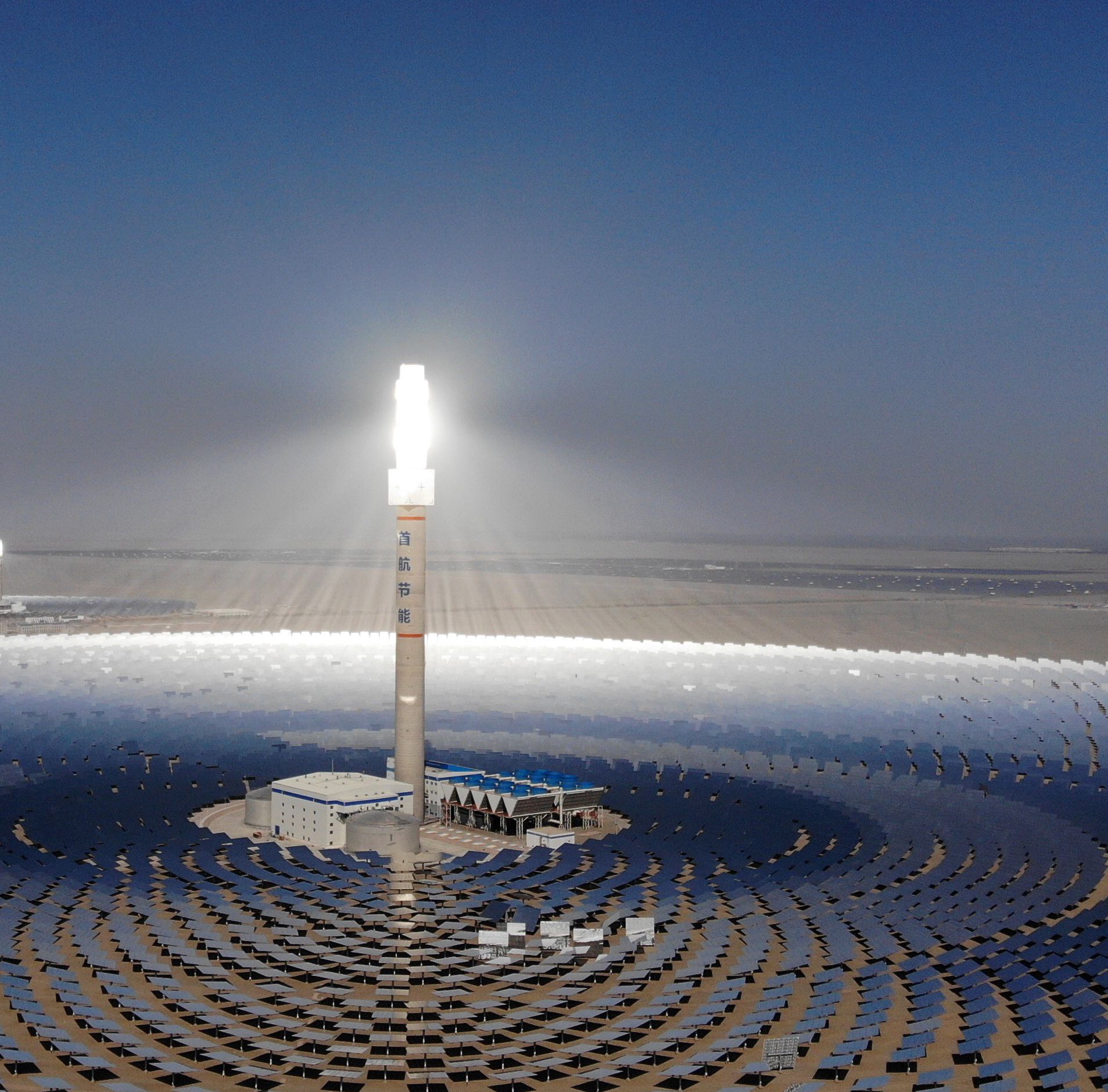 One of the new solar tower CSP projects in China – the optimal preheating algorithm for the receiver atop the tower would be customized to each project, depending on location, solar resource, solar field efficiency and other variables.

Of course, CSP is suited to regions with a higher solar resource like Spain and Italy and desert regions in China, Australia, the Southwest US, Chile, Morocco, and the Gulf states. “The preheating strategy would need to be adapted to these locations,” she said. “Adjusting the DNI calculation to the location is easy. Adjusting the heliostat field efficiency is not trivial. For this, simulations or tests would have to be made in advance for each solar field.”

Heliostat field performance changes with time, as does the DNI. Both are a function of the azimuth angle and the elevation. Another variable is the absorber tube diameter. The larger the diameter, the greater the risk of temperature gradients and transients and the slower the preheating process. All in all, the challenge depends on the configuration of the receiver design and the heat transfer medium and must be adapted to it.

With so many moving targets, this is a complex dance, so preheating is a highly complex process. All of these changes must be considered in the formula she developed.

The problem this solves in CSP

The algorithm is needed to prevent a well understood challenge with molten salts as a heat transfer medium in solar tower CSP.

CSP creates heat by concentrating sunlight using mirrors surrounding a tower with a solar receiver at the top, and the molten salts flow through piping to transfer heat from the receiver to the thermal storage tank. While molten salts are excellent at transferring heat at temperatures of up to 565 °C, the salt begins to crystallise when its temperature drops to 240 °C.

The problem is that while the system piping can have electrical resistant heaters attached to do this morning preheat, the small absorber tubing that makes up the solar receiver itself cannot be heated in the same way.

“This approach can not be used for the absorber tubes in the receiver,” explained Reisch, “That is because during daily operation the solar flux density leads to a high energy input that would destroy the resistance heaters. Therefore the absorber tubes must be preheated with solar energy, by the reflected energy of the sun.”

Since these tubes in the solar receiver are empty during this preheating; filled only with air, the thermal conductivity is very low. By focusing heliostats, high temperature gradients and temperature transients will occur.

“The preheat strategy respects a reaching of a target temperature around 290 °C; above crystallization point, to a maximum temperature transient around 30 K/min which is specified by the receiver coating manufacturer,” she said.

Reisch developed these formulas using optical and thermal simulation. With the help of the optical simulation she built a relationship between the number of heliostats to be focused and the solar flux density that is incident on the receiver.

“The irradiated side will be heated up fast, however the back of the tubing will be cooler, that leads to high temperature gradients.” IMAGE@Isabell Reisch from Preheat Strategy of a Molten Salt Test Receiver

Another problem that has to be taken into account is the occurring temperature gradients in the receiver tubing.

Now, following an on-sun trial held at the DLR test site in Jülich, she is continuing to refine the strategy as a technical employee at DLR while completing a Masters in Mechanical Engineering at the University in Stuttgart.

The evaluation and the testing itself have not yet been completed at the time of the interview.

“The evolution is still in progress but we see difference between the practice in real life and the simulation,” she said. “So the next step is to fit the preheat strategy on the real life conditions.”

The on-sun test is revealing some adjustments needed if a potential operator of a CSP plant using this algorithm were to be able to rely on the calculation in the algorithm. Currently, the preheating strategy is not completely automatic; the operator would still need to make the final decision.

On the whole, though, the commissioning of the preheating strategy has gone well. The results of the test will be presented at the SolarPACES Conference in New Mexico this year in the form of an oral presentation and published in a paper, based on her study Preheat Strategy of a Molten Salt Test Receiver. Reisch is not going to the US for the conference, but her colleague, who has also been working on the topic of solar pre-heating will be there to present the results.