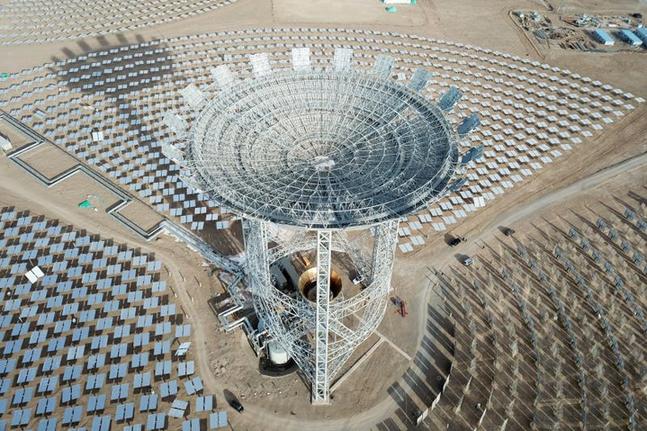 Since the beginning of this year, under the overall situation of promoting “dual carbon” work and making efforts to stabilize growth, my country’s new energy has experienced explosive growth. However, a reporter from the “Economic Information Daily” learned from an interview that from January to April this year, the phenomenon of abandoning wind and light has increased in some areas. In the future, with the continuous increase of new energy installed capacity, many constraints such as insufficient consumption and peak shaving capacity may become more prominent. Industry insiders suggest that policies and measures should be further refined, and the blocking point of large-scale and high-proportion development of ventilation and light should be opened to avoid the problem of high-proportion power abandonment.

In early summer, Dunhuang City, which is located on the ancient Silk Road, has a clear sky, and at noon, the Gobi Desert on the outskirts of the city is already hot. Tens of thousands of heliostats are controlled by the computer to follow the angle of the sun and focus the sunlight on the cylindrical tower in the center of the mirror field. The heat collector at the top of the tower was quickly “ignited”, and it looked like a small artificial sun from a distance.

This is the 100 MW molten salt tower CSP station of Soho Hi-Tech Dunhuang. It is currently the largest in my country and has the highest heat absorption tower, which can generate electricity continuously for 24 hours.

However, it is worth noting that, according to the latest release of the National New Energy Consumption Early Warning and Monitoring Platform, the new energy grid-connected consumption situation in various provincial-level regions shows that from January to April this year, the phenomenon of abandoning wind and light has increased in some areas. For example, the abandonment rate of wind in western Mengxi is 11.8%, and the abandonment rate of light in Qinghai is 10.1%.

According to Liu Shiyu, assistant to the president of the General Electric Power Planning and Design Institute, the main reasons for this problem are that, first, the scale of new energy added to the grid was relatively large in some provinces last year; The third is the preference for wind and solar resources in some regions, resulting in a short-term rebound in the abandonment of wind and solar energy.

Load is oversupplied in the Northwest

Aiming at the goal that the total installed capacity of wind power and solar power will reach more than 1.2 billion kilowatts in 2030, large-scale wind power photovoltaic bases of 450 million kilowatts will be planned and constructed in deserts, Gobi, deserts and other regions in my country. As the rate of curtailment of wind and light has rebounded, the industry is worried that in the future, as large-scale and high-proportion new energy sources continue to be connected to the power system, many constraints such as insufficient consumption and peak shaving capacity will become more and more prominent.

It is understood that some provinces rich in wind and solar resources in the northwest region generally have an oversupply of electricity and belong to the provinces of electricity output. According to the statistics of Gansu Electric Power Company, the province has put into operation 15.52 million kilowatts of new energy this year, including 6.08 million kilowatts of wind power and 9.43 million kilowatts of photovoltaics. However, the growth of consumption capacity is difficult to match the growth rate of installed capacity, and the overall utilization rate of new energy may drop below 90%, compared with 96.83% in 2021.

A person in the new energy industry who did not want to be named also noticed this problem. He told the “Economic Information Daily” reporter that with the rapid growth of new energy installed capacity, the problem of lack of internal accommodation conditions in the provinces has become more serious. Taking into account the low growth rate of electricity load in various provinces in the next few years and the lack of new construction and delivery capacity, the lack of consumption capacity will become an important factor restricting the development of new energy bases.

This is not an exception. Although many places have explored the coordinated use of thermal power, pumped storage, gas power generation, energy storage and other peak shaving methods to enrich the peak shaving means of the power system, the construction of power supply structure and peak shaving capacity cannot be solved in the short term. There are still concerns about energy projects.

In order to solve the blockages, difficulties, pain points and blank spots in the large-scale and high-proportion development of ventilation and light, the General Office of the State Council recently forwarded the National Development and Reform Commission and the National Energy Administration’s “Implementation Plan for Promoting the High-quality Development of New Energy in the New Era”, clarifying 7 aspects 21 specific policy measures.

Industry insiders believe that the next step is to further refine various policies and measures to ensure that various consumption measures are effective, promote technology and model innovation, and continue to carry out new energy consumption monitoring and early warning.

Liu Shiyu suggested to innovate the collaborative operation mechanism of thermal power and new energy, promote the flexibility transformation of thermal power in the “Three North” regions, and guide self-provided thermal power to participate in peak regulation; promote the diversified application of new energy storage, and further improve the price, market, and dispatch mechanism of energy storage. ; Fully mobilize the adjustment and consumption potential of the user side through business model innovation, and encourage the local development and efficient utilization of new energy.

Xue Zhaojun, head of the Development Strategy Research Office of the Policy Research Office of the Gansu Provincial Government, believes that for pumped-storage power plants with a long construction period, preliminary research and demonstration should be accelerated, and project approval should be sought as soon as possible to serve the national “dual carbon” strategy.

Innovation in technology and models is also crucial. Liu Shiyu suggested to carry out pilot demonstrations of new power systems. In accordance with the multi-energy complementary integration model, explore the construction of a new west-to-east power transmission channel with a high proportion of new energy, and promote the consumption of new energy across provinces and regions.

Sun Chuanwang believes that various forms of energy storage can be deployed and the improvement of energy storage technology can be accelerated, such as actively promoting the research and development of emerging electrochemical energy storage such as sodium-ion batteries, breaking through related technology and cost constraints, and improving power regulation capabilities.

Liu Shiyu said that the General Electric Power Regulation Institute will rely on the national new energy power consumption monitoring and early warning platform to continue to provide technical support for the development of the government and the industry, and help the high-quality development of new energy.