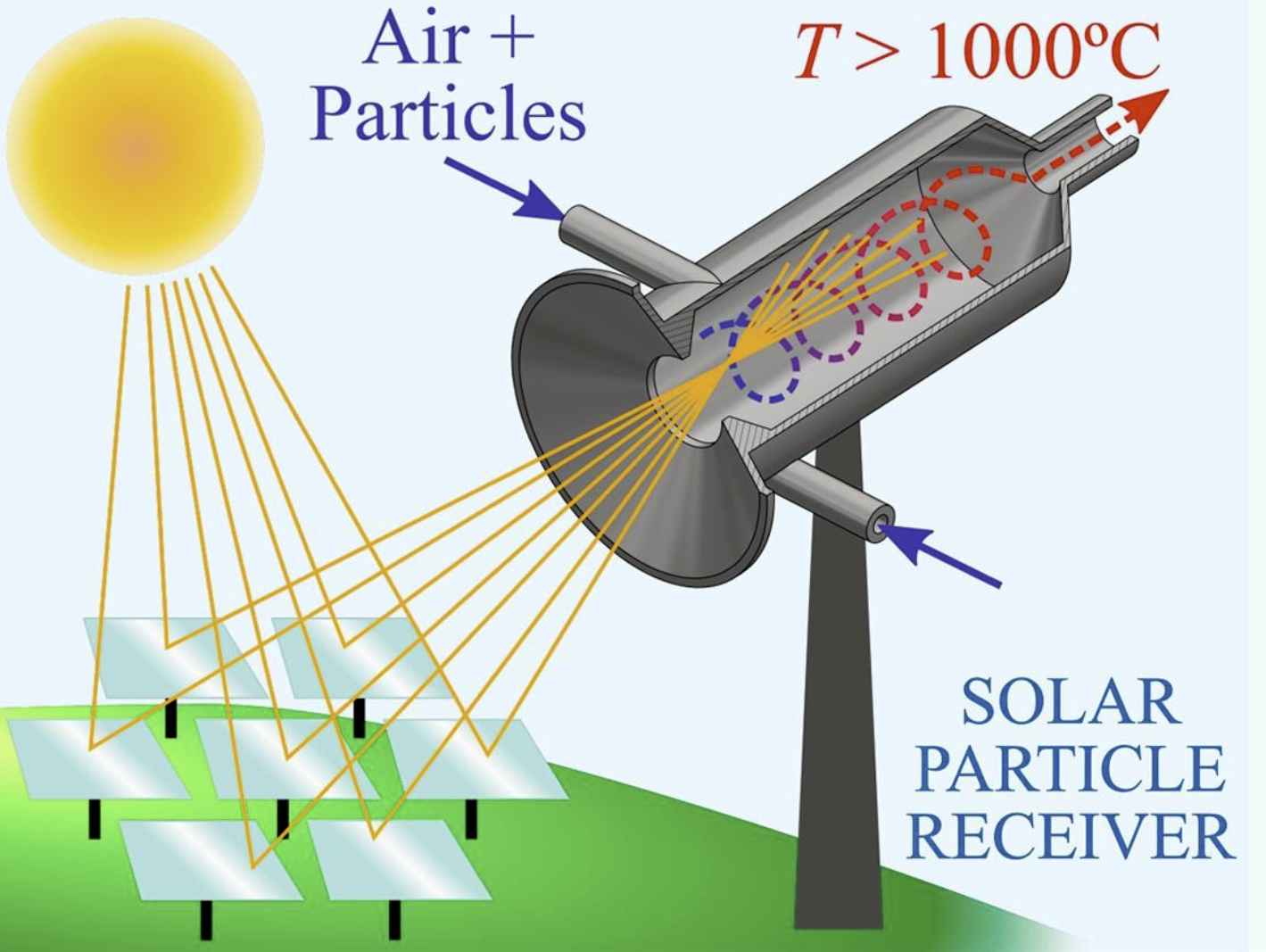 Open vortex particle receiver:
Alumina calcination is one industrial process that could be decarbonized using a 1000°C “hot solar” process

As the need to end the use of fossil fuels for high temperature industries becomes apparent, solar researchers are developing high temperature technologies for tower Concentrated Solar Thermal (CST) energy to replace the heat.

Particles like sand or specially manufactured ceramic particles have been shown to hold heat at 1000°C and above, and so particle-based solar tower CST technologies are now much investigated as essential for decarbonizing the global economy.

Globally, these solar researchers are currently evolving a “Cambrian Explosion” of competing designs for solar receivers able to generate heat at these temperatures when solar flux is directed to them from solar fields of mirrors.

While one branch of particle research proposes that the particles utilize gravity by falling down through the receiver atop the tower – researched at national laboratories in the US, Australia and Saudi Arabia – another branch is investigating twirling the particles around inside the solar receiver.

Two examples of the circulating approach are DLR’s Centrec receiver in Germany, operating like a cement mixer, has recently advanced into its first commercial pilots via the spin-off HelioHeat, providing heat for a pasta firm. The Swiss laboratory ETH developed another design, now further developed by the DLR spin-off Synhelion for manufacturing high temperature processes like solar aviation fuel; an absorbing gas solar receiver.

Very high temperature solar research is even more relevant in sunny Australia where large mining industries have world class potential to decarbonize using this solar technology for generating heat directly for their industrial processes, like alumina processing. One such receiver is under development, a project funded by Australian Renewable Energy Agency (ARENA), by an innovative team of researchers at the University of Adelaide.

“Industrial processes such as alumina calcination require temperatures more than a 1000°C degrees, and to reach that, there are a couple of particle receiver concepts, of such, the vortex flow receiver uses a combination of gas and particles to generate intense heat, which could potentially be configured as an air heating device”, commented U of Adelaide Masters student and author Daniel Ang.

“So to make it work as a windowless configuration, we employ over-ventilated conditions at the outlet, drawing a very minimal amount of air through the aperture which forces the particles to move inwards from the aperture, towards the interior of the receiver,” he explained.

They have described their vortex flow receiver design in previous papers (listed below). Now they want to determine the optimal method between three alternatives to solve a challenge: The advantage of keeping the particles suspended in air means direct exposure to solar flux, and thus a more optimal heat gain, and this simultaneously transfers the heat from the particles to the air around them through means of convection.

“So we would like to effectively heat up both phases, both the solid and the gas ,” he explained.

The analysis compared constant velocity versus constant residence time – or a hybrid of both strategies to identify the strengths and limitations of each. The preliminary results ruled out keeping particle velocity constant as it is too big and costly, and the hybrid didn’t work.

So, operating for constant residence time proved to enable the most compact (and thus; most cost-effective) design for the receiver in the current case. This operating strategy could achieve up to 60% thermal efficiency for the reference case, under high air mass flow rates and particle loadings at a 50 MW scale.

Importantly, the residence time criteria meet the needs of reactors for sensible heating that can subsequently for performing calcination of alumina or lime (example).

“We had very good news because we needed to reach a temperature of around 1100°C, and it is not that easy to achieve that temperature without expecting a lot of heat losses in general,” he said.

“What we are trying to achieve from these studies is to determine the right path for the scaling-up process, but we still need to make some further modifications on the scaling criteria and geometry in order for us to get the optimal design for the receiver under a large scale system,” said Ang. “One of the critical things to consider is the receiver size as well as the aperture size in order for most of the solar flux to get into the receiver – to capture most of the solar flux from the heliostat field with minimum heat loss through the aperture.”

Now the team would like to try a scaled-up version to provide 1000°C degree process heat . “The device is good as particles added increase the heat transfer coefficient, making it capable of achieving high temperatures. This could potentially be a way of producing process heat consistently at 1000°C or above. So if you want to look at hot air for industrial processes, this might be the device to consider,” Ang noted.