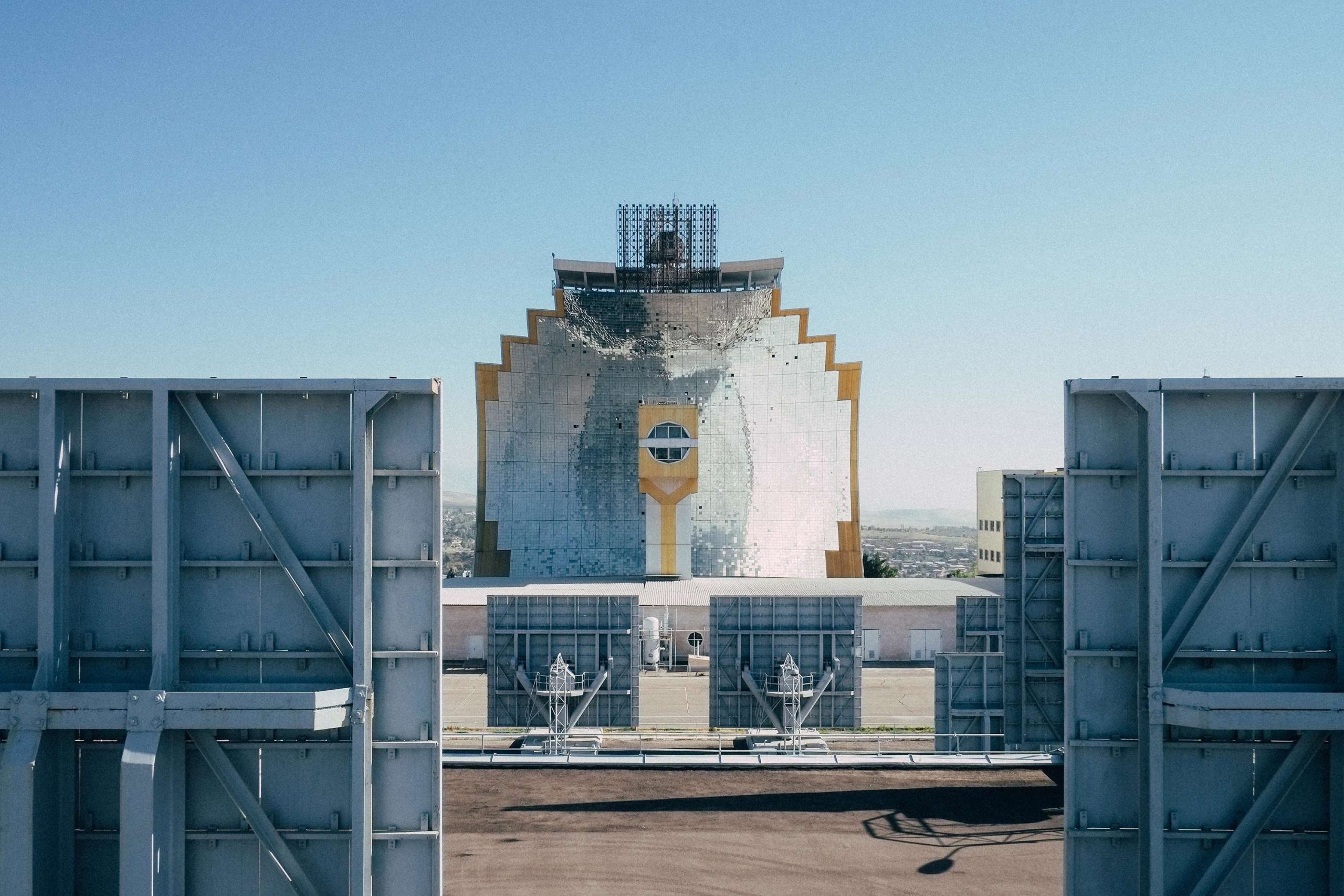 This solar furnace built in Taskent during the Soviet era will be used by Panatère to melt steel. The formerly top secret solar furnace could melt up to 400 tons of recycled steel each year. Here, the rear view of a solar field of heliostats, staggered up a hillside, reflects sunlight into a huge concave mirror system, seen between them, which refocuses the concentrated sunlight into the smaller solar furnace (center) in front of it. IMAGE CREDIT@ATLAS-OF-PLACES-DIGITAL-SAMIZDAT-SOLAR-FURNACE

Rather than gas or electricity, Panatère is preparing to use direct sunlight to recycle steel. It has equipped itself with a powerful concentrating solar furnace, which will allow it to melt metal with near-zero environmental and energy costs. The solar furnace could melt up to 400 tons of recycled steel each year.

Swiss microtechnology company Panatère, a watch component manufacturer and steel recycling business based in Saignelégier, has announced that it will soon inaugurate its concentrating industrial solar furnace. A pilot model – and a world first – that will allow it to melt green steel, locally, to produce components for the watchmaking, medical and aeronautical sectors.

Melting steel using solar energy is the bet Panatère is about to win. A manufacturer of steel and stainless-steel watch components, the company will in a few months be the first in the world to use an industrial solar furnace to melt metal.

“Our material will be 100% recycled and melted using renewable energy,” proudly says Liselotte Thuring, project manager. Instead of sourcing recycled metal bars from China, Panatère plans to produce and use its own steel. In addition to its own waste, the company will collect its raw material (chips and other waste) locally, over an area of 50 km2, from the region’s machinery processing companies in the form of ingots. They will then be used for their own production or sold to similar companies involved in other fields of activity.

For the first time, steel will be industrially recycled from the heat of the sun alone. The solar furnace could melt up to 400 tons of recycled steel each year. The ingots will be reused by Panatère or sold to other companies.

The furnace will reach a temperature of 2,000°C, which is more than enough because the melting point of steel, stainless steel and titanium is between 1,400 and 1,700°C. To do this, the device will need to concentrate the power of solar radiation to a single point with the help of mirrors. 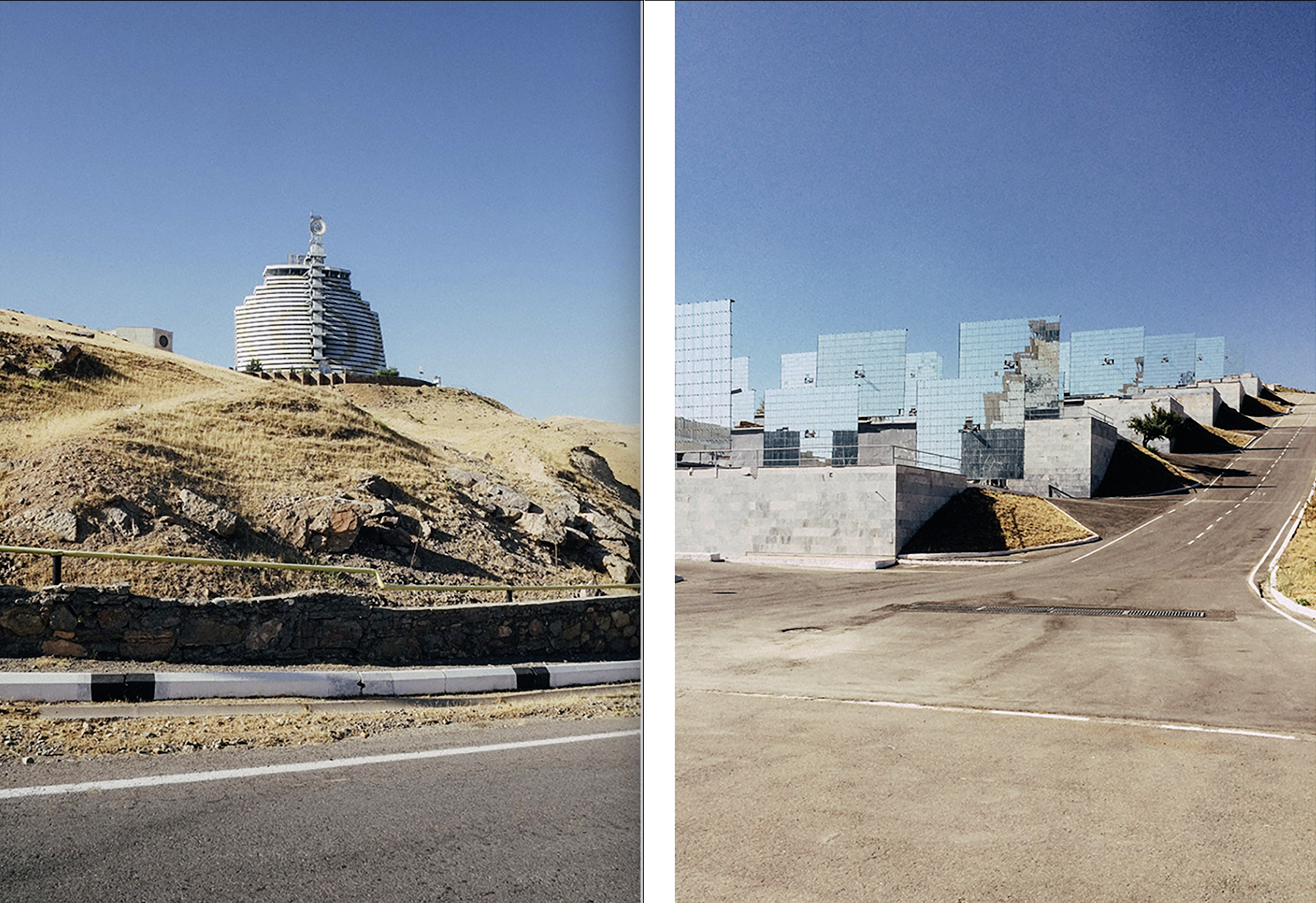 The region of Taskent has a very high solar resource (DNI) year round. Here the back of the secondary reflector is seen (left) and the primary mirror reflectors (heliostats) are staggered up a hill (right) IMAGE@ATLAS-OF-PLACES-DIGITAL-SAMIZDAT-SOLAR-FURNACE

This is the principle of ‘concentrated solar power’, which is also used in thermodynamic plants and scientific furnaces. The Panatère industrial facility is therefore a world first. Steel has never been commercially melted using only the sun’s energy.

Developed in partnership with the École polytechnique fédérale de Lausanne, Panatère’s solar oven will be 15 m wide and 6 m high. It consists of two surfaces covered with mirrors arranged differently. The first, completely flat, directs the rays towards the second, concave. The latter generates a highly focused beam of light directed at the cell in which the metals to be melted are located.

Panatère plans to melt 50 tons of steel and titanium from 2023. It hopes to increase this volume to 400 tons/year by 2026, thanks to the creation of a ‘Solar Metal Processing Center’ that will operate with 4 solar furnaces in one location.

Compared to new steel, recycled steel thanks to sun would make it possible to split the carbon footprint of the business to 165, the company promises. Costs and production rates will not depend on gas and electricity prices, but only on the weather, which is ultimately not so restrictive in the current context. The investment amounts to more than EUR 25 million and the first solar oven is expected to be commissioned before the end of the year.

Reaching temperatures between 250°C and 3,000°C, the industrial solar oven is the upgraded version of household solar cookers and professional solar cookers developed for craftsmanship.

Operating on the principle of concentrating solar radiation, the advantages are that the energy used is inexhaustible and non-polluting, the chemical purity is high (ideal for experiments, there is no combustion gas) and high temperatures are reached quickly. The disadvantage is that it depends on the sun. 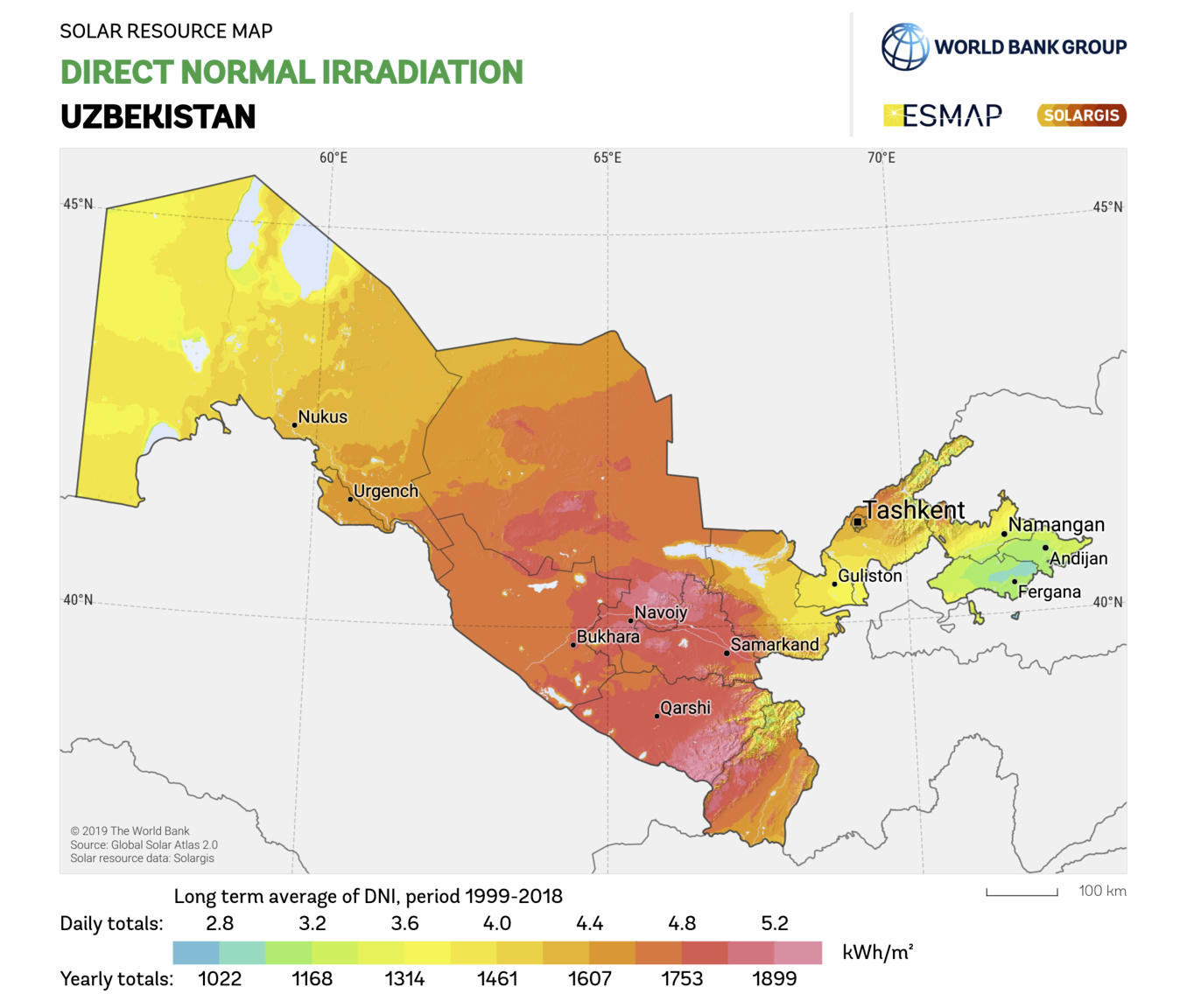 Some of Uzbekistan’s best DNI for this thermal form of solar energy is actually found far from the Tashkent region, where this solar furnace was built in the Soviet era, but along the plateau between the ancient Persian cities of Bukhara and Samarkand on the Silk Road.

Panatère founder, Raphaël Broye, had the idea to transform a problem into an ecological solution five years ago. “We have been active in watchmaking subcontracting for around forty years and five years ago we found ourselves faced with major problems with the supply of quality steel,” he explains. “We approached several large steelmakers in Europe but found ourselves faced with quantity problems. Our request did not interest anyone. This is where we had the idea of setting up a network of partners from watchmaking and medical subcontracting in the Jura arc to pool the collection of our waste. We have all installed sorting and collection bins at the gates of our factories and, once all our waste has been grouped together, after four years we have succeeded in putting together a first batch of 50 tons.”

In December 2021, the company melted its first ingot using solar energy at the industrial solar furnace at Odeillo in the French Pyrénées.

Parkent is one of the two largest solar furnaces in the world (together with the one at Odeillo in France). Commissioned in 1987, Parkent is slightly larger, with a mirror surface area of 1,840 m2 (compared to 1,830 m2) but does not benefit from the same incident solar intensity because the altitude is lower (1,050 m compared to 1,600 m), so it is less powerful, with a usable maximum of 700 kW instead of the 1,000 kW at Odeillo. On the other hand, the optical quality is similar, with a maximum power density of 1,000 W/cm2, which makes it possible to exceed 3,000°C according to the experiment.

The Academy of Sciences of Uzbekistan, through its Solar Physics Laboratory, conducts research there on such topics as the synthesis of new refractory oxides (more than 160 materials synthesized, including alumina) and the development of solar pump lasers.