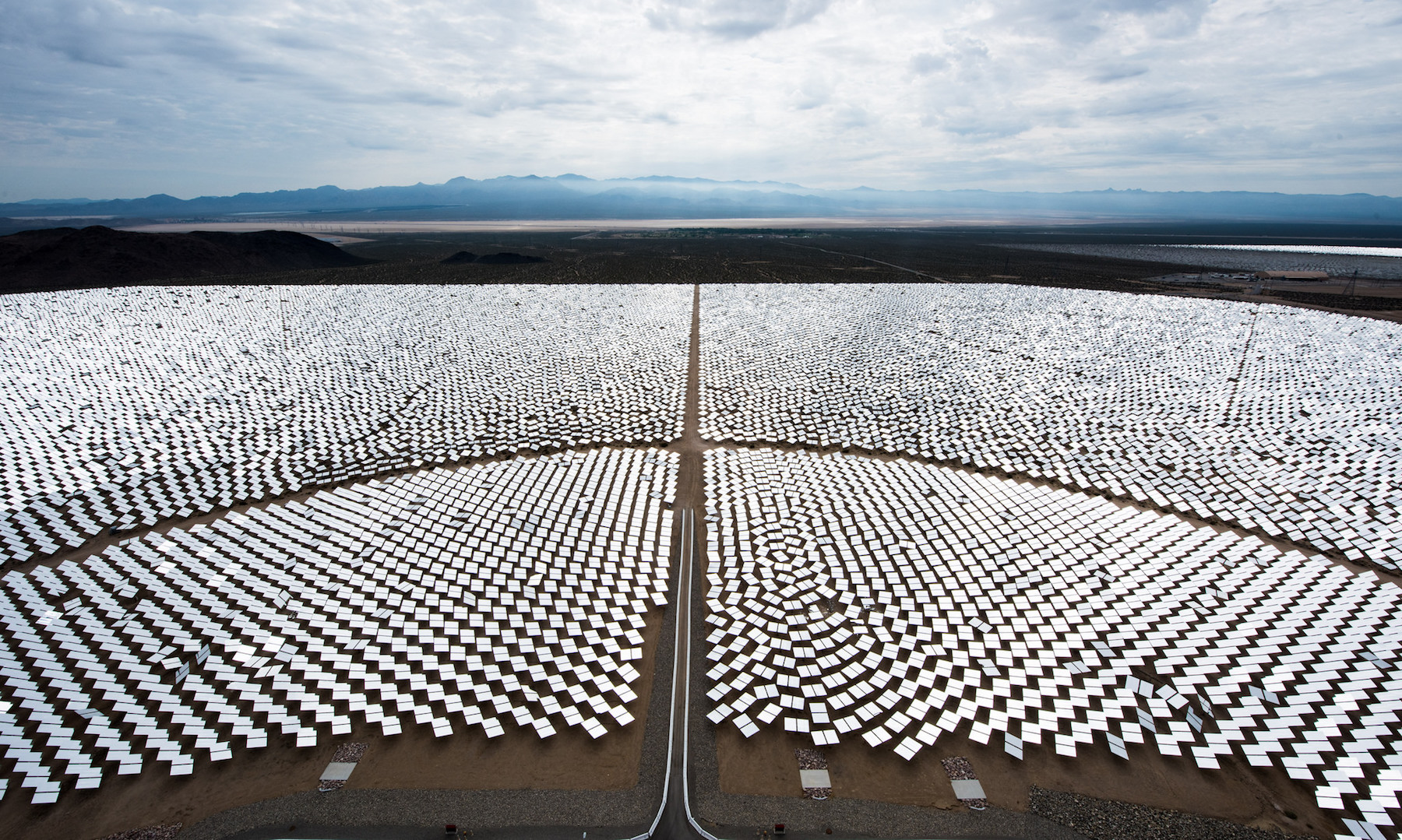 Scientists at NREL find that the answer is yes – in a co-generation setup where CSP using a supercritical carbon dioxide (s-CO2) power cycle is combined with thermal desalination – and they go on to figure out the process that would best maximize fresh water production.

Their look at solar thermal desalination utilizing waste heat from a CSP plant combined with a new kind of high-temperature power cycle; the s-CO2 Cycle, finds that a little-used configuration of MED (Multi-Effect Desalination) called ‘forward feed’ will work best.

Researchers internationally are already investigating the s-CO2 Cycle for CSP, as well as for nuclear and fossil energy applications, because it can be operated at higher temperatures than conventional steam power cycles, increasing power generation efficiency from about 41% to around 50%.

As laid out in a paper published in the June issue of The Journal of Cleaner Production, the NREL scientists assess the best desalination layout with the s-CO2 Brayton cycle in the Optimal Feed Flow Sequence for Multi-Effect Distillation System Integrated with Supercritical Carbon Dioxide Brayton Cycle for Seawater Desalination, using waste heat for this co-generation of electricity and desalinated water.

The aim was to see the best way to increase fresh water production without diverting any power from a 115 MW tower CSP plant, to determine if desalination in a commercial solar plant that is primarily generating electricity could be non-parasitic.

“Our aim in this paper was to find which feed configuration would maximize distillate production, or what minimizes energy consumption for producing unit amount of distillate; either way. In desalination systems the way in which the feed enters plays an important part in the energy consumption: how energy intensive the process is,” explained NREL Post Doc Prashant Sharan, whose PhD focused on desalination.

The researchers found that when powered by waste heat from a concentrated solar thermal plant combined with the s-CO2 Brayton cycle, ‘forward feed configuration’ would best boost efficiency of distillate production.

In multi-effect desalination (MED) repeated evaporation steps gradually distill fresh water from seawater. There are two ways to feed the seawater; the entire feed enters the first effect and sequentially gets concentrated through each evaporative stage in turn (forward feed), or to distribute incoming seawater to each stage simultaneously with almost equal feed flow (parallel feed).

They found that parallel feed, the commonly used MED technology, where each stage is fed in turn, would actually be the less efficient method if combined with the s-CO2 Brayton power cycle.

“If you are going to use steam as the heat input, parallel feed is the best, but from this study we found the forward feed is the best configuration to integrate with the Brayton cycle,” said Sharan.  The paper summarises: “For the case study considered, 4-effect MED gives maximum distillate production of 3041m³ /d at 1.06 $/m³, at a constant power plant efficiency of 49.2%. The distillate produced by forward feed is 7.5% higher and 2.6% cheaper compared to parallel/cross feed configuration.” 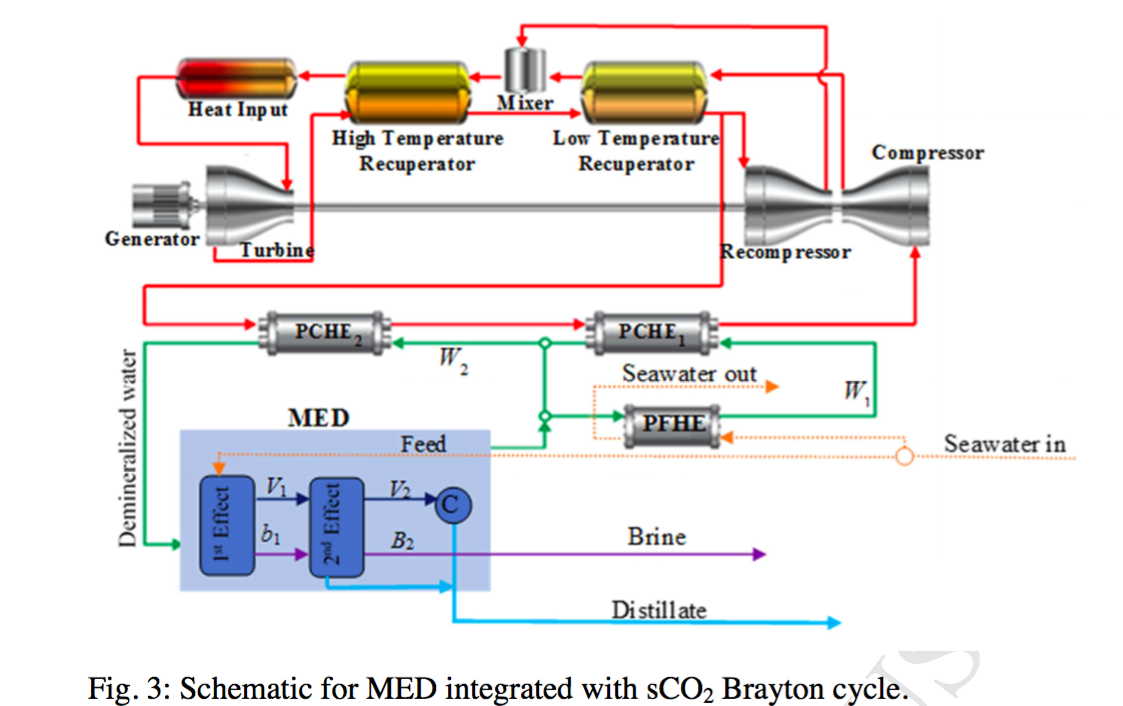 Entering at “Heat Input” top left, heat from the tower CSP plant (not shown) is transferred from molten salt to s-CO2 in the Brayton power cycle. The s-CO2 is cooled from 75°C in the two heat exchangers, first to 40°C in PCHE 2 and then to 32°C in PCHE1, returning the now-cooled s-CO2 to the s-CO2 cycle. The heat exchange transfers the heat into demineralized water at 70°C, the heat source for the desalination. IMAGE@Optimal Feed Flow Sequence for Multi-Effect Distillation System Integrated with Supercritical Carbon Dioxide Brayton Cycle for Seawater Desalination:

The s-CO2 power cycle has been much researched (DOE to Cut Solar Tower Costs by Pairing Novel Techs with s-CO2 Loop) to replace the traditional Rankin steam cycle in solar thermal power plants for a potential efficiency advantage (although newer materials – and potential new costs – could be needed to cope with higher temperatures). Till now, the traditional Rankin power cycle has been used for up to a century in thermal power plants, coal and geothermal, then, nuclear, and most recently, CSP.

The s-CO2 cycle begins rejecting heat around 70°C, a “Goldilocks” temperature for desalination, because the inlet temperature required by MED desalination is in the range of 70°C.

“So the benefit of integrating a CSP plant with the Brayton cycle is that we can produce fresh water without being a parasitic load to the power plant,” he explained. “The desalination uses only the waste heat, because the s-CO2 cycle rejects heat at 70°C, the temperature required to integrate with the desalination system.”

The plant the researchers envision would be a tower CSP plant at a normal commercial 115 MW size, selling electricity to the grid.   “It would only be for tower CSP because the s-CO2 cycle is running at about 600°C and trough CSP typically operates at colder temperatures,” Sharan pointed out. “The current state of the art in solar thermal desalination is you have a steam Rankin cycle with an MED system, but providing 70°C steam to the MED consumes power from the turbine; it is parasitic to the power plant.”

To make 3000 cubic meters (m³) of water a day – “Any good desalination plant wants to produce at least 2-3000 m³ per day” – requires about 30 MWth of thermal heat. With only its waste heat tapped for desalination, the 115 MW CSP plant could co-generate water at a bit over this widely accepted rate of 3000 m³ per day.

“Our first aim was to not modify the efficiency off the plant, and then produce as much water as we can. Cogeneration of power and water could also work on a smaller CSP plant, but the ratio of power production to water production would remain constant. So with a 20 MW CSP plant, you would then be producing only 600 m³ per day,” he explained.

“If the need for desalination was much greater than the need for electricity, then this design won’t give an optimal solution, because it is designed to only use waste heat. However, the warmer heat rejection temperature of the s-CO2 cycle likely remains beneficial for systems that decrease the cycle efficiency to generate additional desalinated water.”

As in many hot dry agricultural regions, years of intensive farming inland has led to a need for agricultural desalination to recycle run-off water in California.   The NREL researchers previously found that because of California’s high electricity price (10 cents per kilowatt hour in 2017 for commercial use like desalination) their methodology could be 20% cheaper than the current most commonly used desalination technology, Reverse Osmosis, which uses electricity.

In agricultural desalination, brine must be concentrated enough that there is no liquid remaining; to meet regulations requiring zero liquid discharge (ZLD) not just in California but in many regions globally.

“Zero liquid discharge is going to be a future thing. The major concern with desalination is the residue,” Sharan said. “That is going to be expensive, with stringent environmental rules coming up.”   With a modification to meet ZLD, this could be used in agricultural desalination inland, where the solar resource is excellent, and land is not as costly as land close to the coast to desalinate seawater.

Countries in the MENA region ranging from Morocco, to the United Arab Emirates and Saudi Arabia, are the latest to leverage the value of CSP.