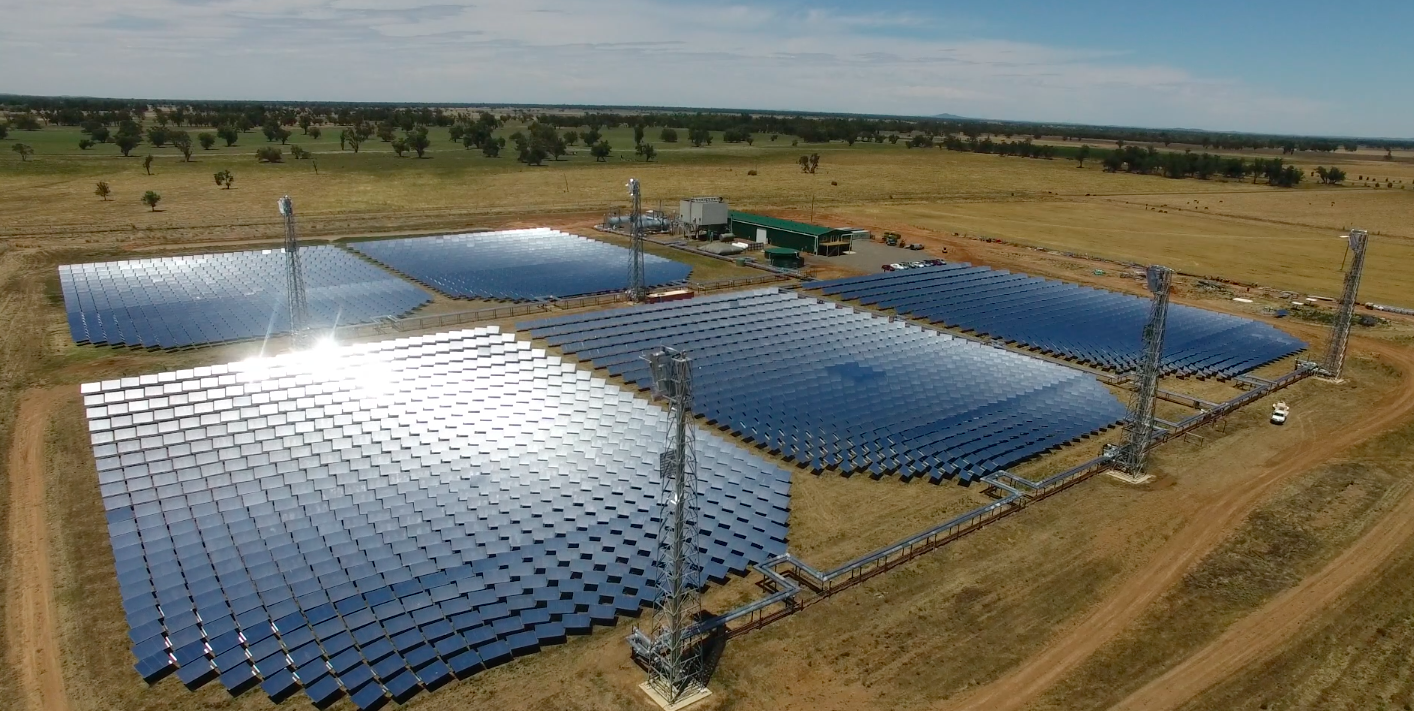 Their design appears like a small modular tower system, but it also borrows many attributes of CSP’s earlier technology, the more tried and tested and bankable trough CSP. (How CSP works; trough, tower, etc)

This mixed technology background informs an openminded approach that results in an innovative design that marries the best technology attributes of tower with the best of trough CSP.

“I’ve seen different technologies in my career, each has problems and solutions to those problems, and we’re just trying to work through them in a certain logical manner. I don’t think there is only one recipe,” Drewes noted.

Vast Solar’s key innovation is the use of high temperature sodium as a Heat Transfer Fluid (HTF) piped horizontally continuously around the solar field like in a trough plant. In this, it takes the best of trough plants, but makes it better. Trough plants have been limited by thermal oil HTF to operating at around 400°C. Tower CSP has promised greater efficiency because its molten salts HTF can operate at 565°C to stay within degradation limits at about 600°C.

Benefit of high temperature sodium as the HTF

As well as having a higher boiling point than molten salts, sodium has a lower freezing point of 98°C, so it has an enormous 800°C “operating range” between the 98°C and the 900°C, making it possible to operate comfortably well within a larger margin of error.

This eliminates a problem with molten salts of a narrower 300°C operating range between freezing at 290°C and the operating limit at 565°C. The narrowness creates the risk of exceeding those limits; of degradation, if it gets too hot, or of freezing if it gets too cold, which make operating tower CSP challenging.

Temperature sensitivity is why tower receivers require careful monitoring and temperature regulation, and interventions to keep the molten salts from freezing, or immediately defocusing heliostats to avoid overheating.

Drewes said: “To quote one of the great minds of CSP, Bruce Kelly: ‘The problem in tower CSP is not running the plant, it is starting and stopping it.’ This is because, in tower CSP, there are very large surfaces that cool off. Heat loss makes it is very easy to freeze. Added to this, the plumbing configuration in tower also makes the control response very slow.”

Even if a sodium-based HTF does get cold enough that it does freeze, it only needs to ramp up to 98°C, compared to back to 290°C for molten salts.“We’ve had freezes. There’s always a chance that something goes wrong,” Drewes conceded. “But we’ve always been able to come back from them because it’s not hard to get to 98°C and the conductivity of the material is off the charts. Because of this “resilience”, a sodium HTF means you can just keep running it through the piping, recirculating it continuously like in a parabolic trough plant.”

For energy storage at the power block, the heat from the sodium HTF would then be transferred to molten salts to connect to today’s steam cycle power blocks operating at around 500°C. (As HTF, sodium is cheaper than the thermal oils currently used in trough CSP, but as energy storage, it is more expensive than molten salts, and a large volume is required.)

As in a trough plant, Vast Solar pipes the HTF horizontally around the solar field to the power block, instead of vertically to a power block and storage tanks situated underneath the receiver like in current tower CSP.

With none of that infrastructure underneath, much of the complexity of construction of today’s tower CSP can be bypassed. Though the liquid sodium HTF is sent up the tower to be heated by sunlight in the receiver, no other infrastructure is required.

“When you are working vertically; with the power block under the tower, you need to be extremely careful,” he said. “People are expected to work inside the tower, so you’ll need an elevator. That gets hot, so you’ll need ventilation. In the middle of the night, if the lights fail, you’ll need backup lighting. So a tower just becomes its own ecosystem of complexity and cost.”

Because the HTF is primarily piped horizontally to the power block, the Vast Solar towers can be simple, low-cost structures more like transmission towers.

Like a trough plant, the solar modules are squared to the sun in a polar arrangement south of the receiver (in the Northern Hemisphere. In the Southern Hemisphere; it would be to its north). A polar solar field has fewer cosine losses, because the mirrors are more square to the sun more often.

“If you are a ray of sunlight looking at our mirror you see a larger perceived surface area because you’re looking at it square-on. If you look at it at an acute angle, the apparent size of the mirror reduces significantly and that is a big thing in optics. That is one of the main reasons for this configuration. The modular arrangement significantly improves optical performance,” he explained.

This increase in optical efficiency means that if you had a 100MW Vast Solar plant of 5 rectangular 20MW polar solar fields, it would occupy 20% less land than does today’s 100MW tower plant with a circumpolar solar field.

Trough has proven itself as plug & play – like PV

As Drewes sees it, CSP innovation should build on the manufacturing ease of PV, and the proven operational success of trough.

“Parabolic trough plants work. They’re reliable. They’re stable. And we’ve got to start asking why that is,” said Drewes. “One of the reasons is that you can just sit down in the control room, heat it up and it’s available. It’s easy. We need to make CSP plug & play, easy like PV.”

Because of sodium’s wide operating range, it would never be operated near its boiling or freezing limits, and so this would enable continuous operation in a tower project, just like a trough plant: “The reason it is so easy with trough is that the HTF is always flowing and so to a large extent there is no intervention needed.”

And with multiple small modules like trough arrayed in small 20MW solar fields, construction can be mass-produced and standardized like PV module manufacturing.

“We are convinced that it is easier to build 20 MW of the same device than to build a unique 100 MW complex, so that there should be no unmanaged construction or process risk. The reason PV panels have become so cheap is because it’s done in a very repetitive process in a controlled manner. It is not complex,” Drewes noted.

“We’ve got to make CSP simple. Cost reductions can only come if we follow that philosophy: Making repetitive tasks in a very controlled manner. Like a McDonald’s hamburger. No matter where you buy it, it always comes out the same.”