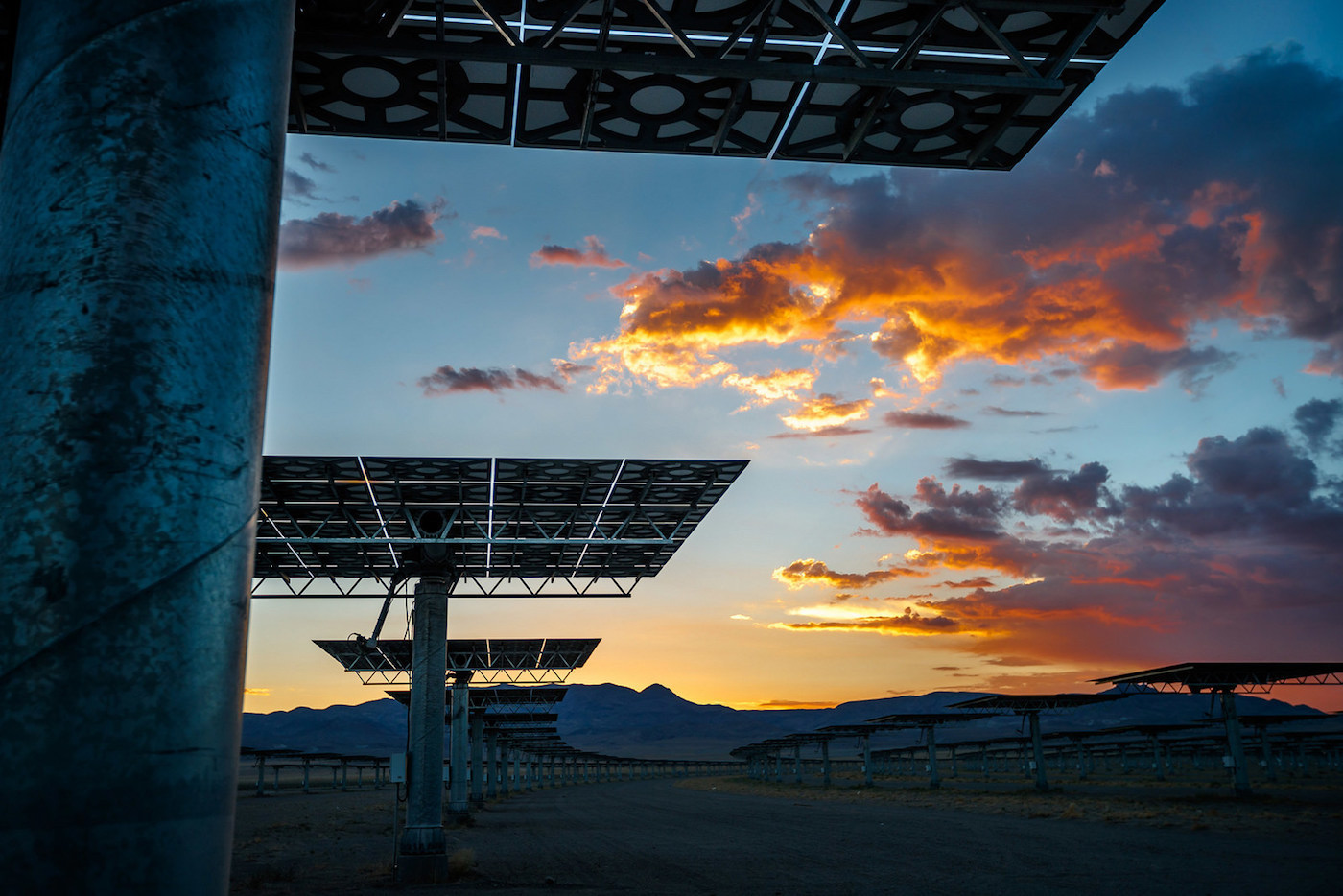 Solar can be designed to run only after dark at a competitive price with a current natural gas peaker plant.

Concentrated Solar Power (CSP) can be a night-only dispatchable (D-CSP) plant; with its entire solar energy absorbed by day to be delivered after dark to cover the evening peak load on the grid, according to a study funded by the US Department of Energy (DOE). The finding is timely. California’s Governor has just signed a bill that outlaws fossil-fueled peaker plants.

Under a technology 2 market R&D contract with the DOE, CEO Hank Price of Solar Dynamics did the math on operating a tower CSP project in Arizona or California as a solar version of a typical gas peaker plant, by storing all of its solar energy thermally to be delivered just for the 5 or 6 hour evening peak. (see how CSP thermal solar storage works)

“A D-CSP plant would be designed so that it can store all of the energy during the day in order to produce that power all at nighttime,” said Price at a presentation at the SolarPACES 2017 Conference in Chile. The adaptation would require reconfiguring the ratio of collection to storage.

Storing energy and operating would be in two separate steps that tower CSP with storage is best suited to do.

Price’s study was inspired by his work with the Arizona utility APS (Arizona Public Service) as an engineer with Abengoa’s 280 MW Solana CSP project.

“I was the performance engineer with Abengoa on Solana, so I worked with Brad Albert and APS in trying to decide how it was going to operate,” said Price. “The concept was actually their idea. They came to us and said: “Hey, make a molten salt power plant be a peaker plant.” And so we started this concept. Then after Abengoa ran into some financial difficulties we were able to convince the Department of Energy to invest some money to help develop the idea as positive technical take-to-market program.

Because daytime rooftop solar is growing so fast – in addition to the more foreseeable growth in utility-scale solar – both Arizona and California are already planning for dealing with the steeper “duck curve” in the evening. Flexible generation needs to start up when solar PV generation ramps down at sundown – just as consumers arrive back from work and fire up the comforts of home.

Both states now show a readiness for an alternative to fossil fuels for peaking, so Price evaluated a site near Phoenix (APS’s highest need) close to the California border, that is also within CAISO (allowing for delivery into California), with a solar resource of 2,900 kW per square meter (7.9 kW/m2-day). 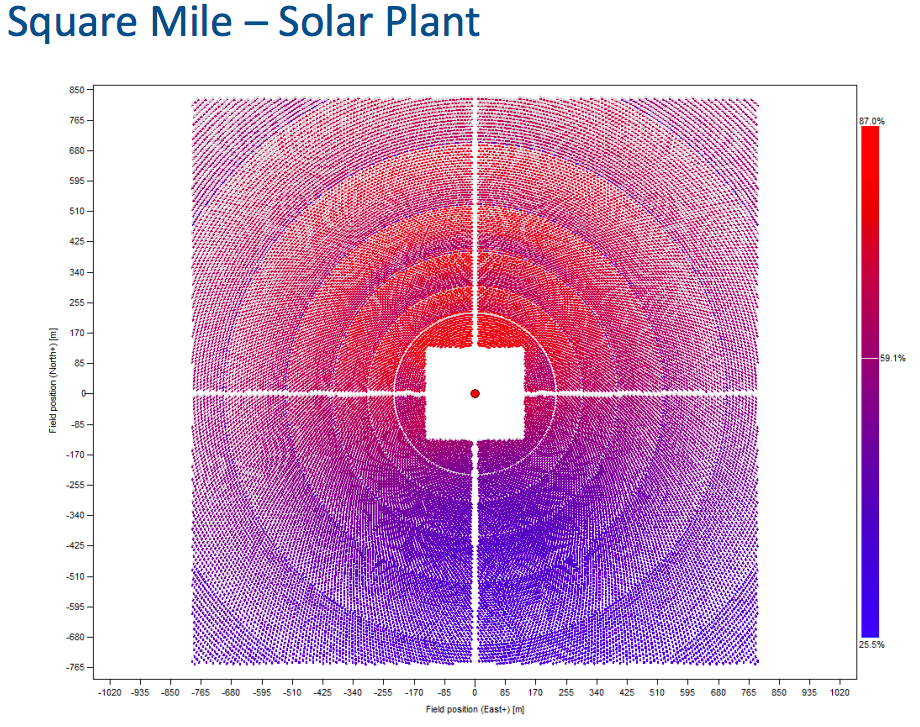 Each D-CSP plant would fit within the familiar square mile layout of farms across the Southwest states. Efficiency gains made possible by a standardized layout on square mile farming lots means that solar peaker plants replicated in the future would ease siting difficulties and cost less.

“In the US there’s a lot of commercial farmland in the west, and this is largely laid out in square-mile sections, so it’s easy to come by large parcels of land for a plant like this,” he said.

Price ran the numbers for designs for various heliostat field sizes of 350, 400, 450, and 500 MWt, all integrated into a 250 MW gross power cycle, to run for 5 or 6 hours of reliable capacity from 3 or 4 pm to 9 pm during the summer months, and with a 30-year project life. He found that a 400 MW solar field would achieve the best fit during summer, with capacity factor averaged between 15% – 25%.

He said that the 400 MWth solar field would be coupled to a Siemens fast start 250 MW steam turbine and an Aalborg steam generator design with a once-though header style heat exchanger design, capable of much more rapid thermal transients to easily handle the rapid start and ramping required. 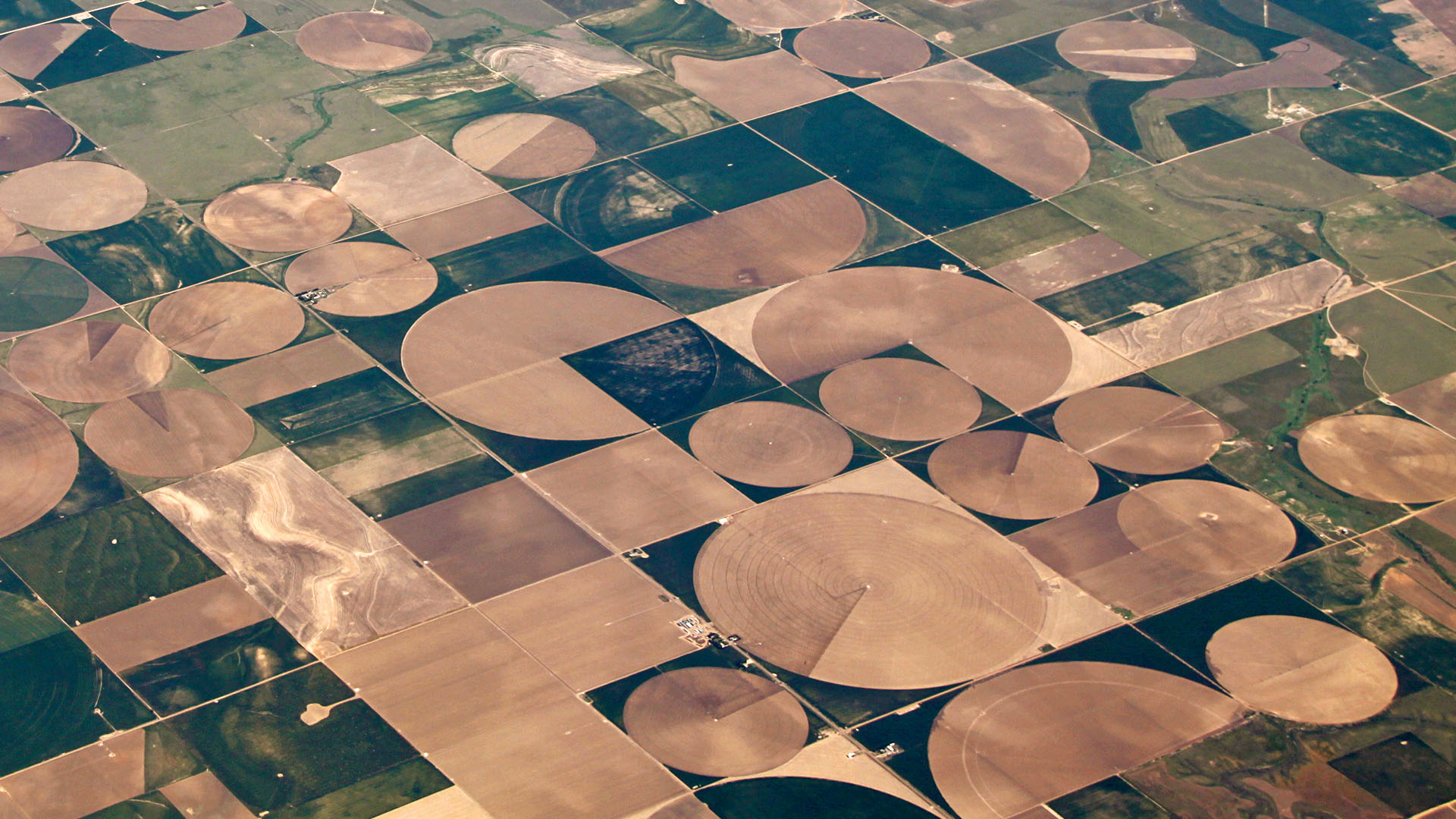 “In the US there’s a lot of commercial farmland in the west, and it is largely laid out in square-mile sections, so it’s easy to come by large parcels of land for a plant like this,” he said. IMAGE: Wikipedia

APS is open to solar in new RFP

A peaker must be:

…able to operate for 4 hours at 100% contract capacity, when the temperature is 45.6°C (114°F) and 20% relative humidity
…dispatchable by APS with automatic generator control (load following capability),
…capable of stable operation at a minimum operating level of 25% loading without exceeding emissions limits,
…available for operation for the summer peak period starting June 2021 but not before January 2021.

…be capable of at least 2 starts per day, with fast ramp rates, able to be online and dispatchable in 10 minutes or less
…have shorter minimum run, minimum down, and start-up times,
…interconnect to the APS transmission system near Phoenix.

“The plant will be scheduled into the day ahead and hour ahead markets, and potentially into shorter interval markets, such as the energy imbalance market (EIM) at 5 and 15-minute intervals. The ability to start up and ramp to full load in less than 30 minutes for a warm start (when the plant has been operated in the last 24 hours)” 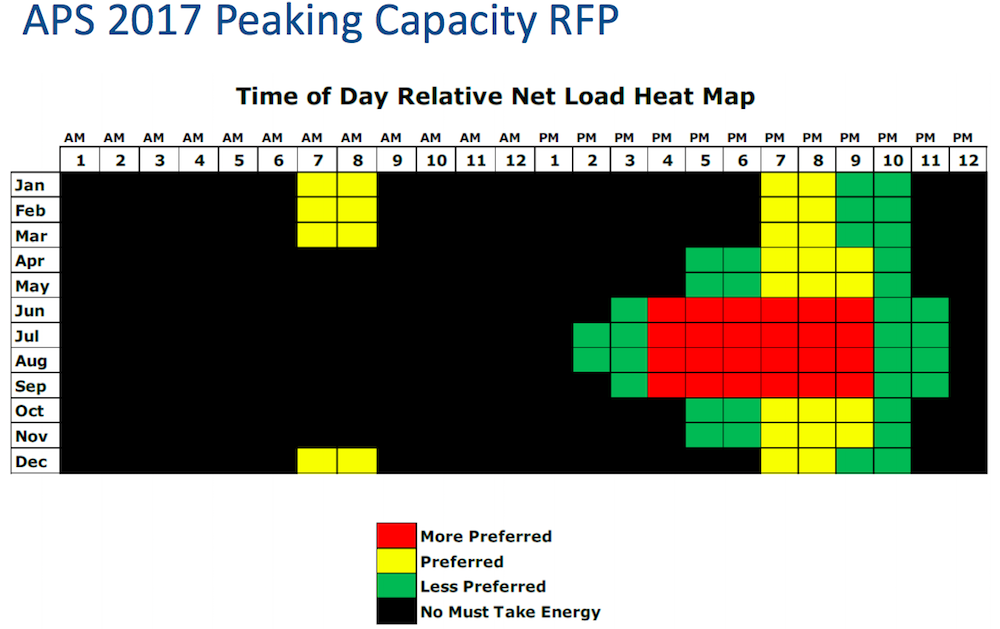 A solar peaker would be paid like a gas peaker

Normally, solar power is contracted under a power purchase agreement, which is paid by the kilowatt hour generated. More hours of operation equals more money to amortize capital costs faster, so developers want to maximize the hours of operation each year. So running 12 hours a day, like most tower CSP plants are designed to run, makes sense because that gives you an annual capacity factor of about 50%. So how can this solar peaker plant running only 5 hours, with an annual capacity factor of just 15 – 20%, earn back its costs?

Peaker plants get paid a capacity payment under something called a tolling agreement, which gives the utility complete control on a day-to-day basis over when and how long the peaker plant should run.

A tolling agreement can pay more than a PPA. But a peaker operates few hours. Its fuel is supplied by the utility, and its operation is totally under the control of the utility, which is responsible for covering peak load hours scattered through the year.

“The plant would receive capacity value for supplying energy primarily during those “red” hours in the summertime. Those are the critical periods,” said Price, who did 10 years of simulation using actual solar resource data. Price found that the cost of the first-of-a-kind solar peaker could come within 5% of the cost of running a gas peaker, given current fuel costs and current (low) carbon costs in Arizona. The comparison can not be exact, however, because fossil fueled peaker plants run less than half the time a solar peaker could with no fuel cost. So Price compared partly to a highly paid peaker, and partly to non peaker natural gas delivering at a much lower price.

“We found that over that time we were able to maintain about a 90 – 94% capacity factor for that six hour summer peak. So it was a good match between the solar resource and their peak demand. APS told us that that’s as good as they could get from a fossil plant.”

Because fossil fueled peaker plants have been run on utility-supplied fuel, utilities run them as few hours as possible; but with free ‘fuel’ from the sun, yet the same full control over when and how much to dispatch, utilities could be more generous in deploying their own solar peaker.

“If you had a fossil peaker, you’d only run it 3 months of the year. But in our case, if you have free fuel, your marginal cost to operate is very low, so you operate at a higher capacity factor than a fossil peaker,” he said.

“During the rest of the year they don’t really need capacity per se, but since you have in essence free fuel, you would become the preferred resource. So then they would dispatch the plant in the way that gives them the highest value for the system. And in the case of Arizona in the wintertime they have an early morning peak before the sun comes up and the evening peak when the sun sets. So they would use the power in those two periods.”

The future could be clean; solar by day and by night

Arizona is looking for peaking capacity of 400 to 700 MW for the next 15 years and is technology-agnostic about how to cover it. However, natural gas (and coal) have trouble running as temperatures rise.

“Many power plants’ performance drops off as the air temperature goes up. Natural gas plants performance may drop 20% at 115° for example,” Price pointed out. Arizona is expected to see higher temperatures over the next decades due to climate change.

His proposed plant would use air cooling most of the time, and water cooling only when temperatures exceed 25 C. This is about about 4% as much water as the same sized farms in the area. The price at about $250 per kilowatt year is competitive with a natural gas peaker and has zero carbon emissions.

So what’s needed to bring the world’s first solar peaker plant to the US Southwest?

Next, Solar Dynamics is looking for a developer or even long-term owner to partner with. Price’s study is a comprehensive but preliminary engineering design for a representative site, including the design, performance, cost and schedule. Next comes development: checking solar resource, siting, permitting, negotiating a tolling agreement, financing, and hiring or contracting the EPC to build the plant.